Simon bar Kokhba (Hebrew: שמעון בר כוכבא‎) (died 135 CE) was the Jewish leader of what is known as the Bar Kokhba revolt against the Roman Empire in 132 CE, establishing an independent Jewish state which he ruled for three years as Nasi ("Prince"). His state was conquered by the Romans in 135 following a two and half-year war.[1]

Documents discovered in the 20th century in the Cave of Letters give his original name, with variations: Simeon bar Kosevah (Hebrew: שמעון בר כוסבה‎), Bar Koseva (בר כוסבא) or Ben Koseva (בן כוסבא‎).[2] This may indicate his father or his place of origin was named Kosevah.[3]

The Jewish sage Rabbi Akiva indulged the possibility that Simon could be the Jewish messiah, and gave him the surname "Bar Kokhba" meaning "Son of the Star" in Aramaic, from the Star Prophecy verse from Numbers 24:17: "There shall come a star out of Jacob".[4] The name Bar Kokhba does not appear in the Talmud but in ecclesiastical sources.[5] Rabbinical writers subsequent to Rabbi Akiva did not share Rabbi Akiva's estimation of ben Kosiva. Akiva's disciple, Yose ben Halaphta, in the Seder 'Olam (chapter 30) called him "bar Koziba" (Hebrew: בר כוזיבא‎), meaning, "son of the lie".[6] The judgment of Bar Koseba that is implied by this change of name was carried on by later rabbinic scholarship at least to the time of the codification of the Talmudim, where the name is always rendered "Simon bar Koziba" (בר כוזיבא) or Bar Kozevah (בר כוזבה). 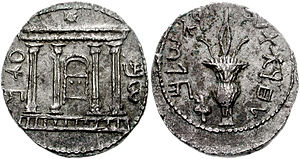 Bar Kokhba silver Shekel/tetradrachm. Obverse: the Jewish Temple facade with the rising star, surrounded by "Shimon". Reverse: A lulav and etrog, the text reads: "to the freedom of Jerusalem"

Despite the devastation wrought by the Romans during the First Jewish–Roman War (66–73 CE), which left the population and countryside in ruins, a series of laws passed by Roman Emperors provided the incentive for the second rebellion.[7] Based on the delineation of years in Eusebius' Chronicon (now Chronicle of Jerome), it was only in the 16th year of Hadrian's reign, or what was equivalent to the 4th year of the 227th Olympiad, that the Jewish revolt began, under the Roman governor Tineius (Tynius) Rufus, whereas Hadrian sent an army to crush the resistance. Bar Kokhba, the leader of this resistance at the time, punished any Jew who refused to join his ranks.[8] Two and a half years later, the war had ended. The Roman Emperor Hadrian at this time barred Jews from entering Jerusalem; a new Roman city, Aelia Capitolina, was to be built in its place.

The second Jewish rebellion took place 60 years after the first and established an independent state lasting three years. For many Jews of the time, this turn of events was heralded as the long hoped for Messianic Age. The excitement was short-lived, however, and after a brief span of glory, the revolt was crushed by the Roman legions.

The Romans fared very poorly during the initial revolt facing a unified Jewish force, in contrast to First Jewish-Roman War, during which Flavius Josephus records three separate Jewish armies fighting each other for control of the Temple Mount during the three weeks after the Romans had breached Jerusalem's walls and were fighting their way to the center. Being outnumbered and taking heavy casualties, the Romans adopted a scorched earth policy which reduced and demoralized the Judean populace, slowly grinding away at the will of the Judeans to sustain the war.

Bar Kokhba took up refuge in the fortress of Betar. The Romans eventually captured it after laying siege to the city for three and a half years, and they killed all the defenders except for one Jewish youth whose life was spared, viz. Simeon ben Gamliel.[9] Rabbi Yohanan has related the following account of the massacre:[10] “The brains of three-hundred children were found upon one stone, along with three-hundred baskets of what remained of phylacteries (Hebrew: tefillin‎) were found in Betar, each and every one of which had the capacity to hold three measures (Hebrew: three seahs, or what is equivalent to about 28 liters‎). If you should come to take [all of them] into account, you would find that they amounted to three-hundred measures.” Rabban [Shimon] Gamliel said: “Five-hundred schools were in Betar, while the smallest of them wasn't less than three-hundred children. They used to say, ‘If the enemy should ever come upon us, with these metal pointers [used in pointing at the letters of sacred writ] we'll go forth and stab them.’ But since iniquities had caused [their fall], the enemy came in and wrapped up each and every child in his own book and burnt them together, and no one remained except me.” According to Cassius Dio, 580,000 Jews were killed in overall war operations across the country, and some 50 fortified towns and 985 villages razed to the ground, while those who perished by famine, disease and fire was past finding out.[11] So costly was the Roman victory that the Emperor Hadrian, when reporting to the Roman Senate, did not see fit to begin with the customary greeting "If you and your children are well, all is well. For I and the army are all in good health."[12]

In the aftermath of the war, Hadrian consolidated the older political units of Judaea, Galilee and Samaria into the new province of Syria Palaestina, which is commonly interpreted as an attempt to complete the disassociation with Judaea.[13][14][15]

Over the past few decades, new information about the revolt has come to light, from the discovery of several collections of letters, some possibly by Bar Kokhba himself, in the Cave of Letters overlooking the Dead Sea.[16][17] These letters can now be seen at the Israel Museum.[18]

According to Israeli archaeologist Yigael Yadin, Bar Kokhba tried to revive Hebrew and make Hebrew the official language of the Jews as part of his messianic ideology. In A Roadmap to the Heavens: An Anthropological Study of Hegemony among Priests, Sages, and Laymen (Judaism and Jewish Life) by Sigalit Ben-Zion (Page 155), Yadin remarked: "it seems that this change came as a result of the order that was given by Bar Kokhba, who wanted to revive the Hebrew language and make it the official language of the state."

Simon bar Kokhba is portrayed in rabbinic literature as being somewhat irrational and irascible in conduct. The Talmud[19] says that he presided over an army of Jewish insurgents numbering some 200,000, but had compelled its young recruits to prove their valor by each man chopping off one of his own fingers. The Sages of Israel complained to him why he marred the people of Israel with such blemishes. Whenever he'd go forth into battle, he was reported as saying: "O Master of the universe, there is no need for you to assist us [against our enemies], but do not embarrass us either!"[19] It is also said of him that he killed his maternal uncle, Rabbi Eleazar Hamūdaʻī, after suspecting him of collaborating with the enemy.[19] Bar Kokhba was a ruthless leader, punishing any Jew who refused to join his ranks. According to Eusebius' Chronicon (now Chronicle of Jerome), he severely punished the sect of Christians with death by different means of torture for their refusal to fight against the Romans.[8]

Since the end of the nineteenth century, Bar-Kochba has been the subject of numerous works of art (dramas, operas, novels, etc.),[20] including:

Another operetta on the subject of Bar Kokhba was written by the Russian-Jewish emigre composer Yaacov Bilansky Levanon in Palestine in the 1920s.

John Zorn's Masada Chamber Ensemble recorded an album called Bar Kokhba, showing a photograph of the Letter of Bar Kokhba to Yeshua, son of Galgola on the cover.

According to a legend, during his reign, Bar Kokhba was once presented a mutilated man, who had his tongue ripped out and hands cut off. Unable to talk or write, the victim was incapable of telling who his attackers were. Thus, Bar Kokhba decided to ask simple questions to which the dying man was able to nod or shake his head with his last movements; the murderers were consequently apprehended.

In Hungary, this legend spawned the "Bar Kokhba game", in which one of two players comes up with a word or object, while the other must figure it out by asking questions only to be answered with "yes" or "no". The questioner usually asks first if it is a living being, if not, if it is an object, if not, it is surely an abstraction. The verb "kibarkochbázni" ("to Bar Kochba out") became a common language verb meaning "retrieving information in an extremely tedious way".[21]