Simone Laudehr (born 12 July 1986) is a German footballer. She plays as a central midfielder or winger for 1. FFC Frankfurt and the German national team.[1]

Laudehr began her career at the age of three at FC Tegernheim. In 1996, she joined SC Regensburg, before playing for FC Bayern Munich for one season. At Bayern she made her Bundesliga debut. Laudehr transferred to FCR 2001 Duisburg in 2004, where she was runner-up in the Bundesliga five times, including four seasons in a row from 2005 to 2008. She won the German Cup twice with Duisburg and claimed the UEFA Women's Cup with the club in the 2008–09 season.[1] For the 2012–2013 season she moved to 1. FFC Frankfurt. She extended her contract until the 2016–17 season on 21 April 2015.[2] 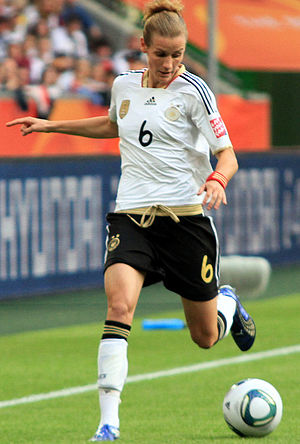 Laudehr playing for Germany in 2011.

In 2004, Laudehr was runner-up with Germany at the 2004 UEFA Women's U-19 Championship and later that year won the 2004 FIFA U-19 Women's World Championship. She made her debut for the German senior national team in July 2007 against Denmark. Only two months later she was part of Germany's 2007 FIFA Women's World Cup squad. Laudehr was a starter for Germany in five matches, including in the World Cup final, in which she scored after 86 minutes to seal the German 2–0 victory. Her World Cup winning header was later voted Germany's Goal of the Month.

One year later, she won the bronze medal at the 2008 Summer Olympics and was part of Germany's team which won the country's seventh title at the 2009 European Championship. Laudehr has been called up for Germany's 2011 FIFA Women's World Cup squad.[1]

Laudehr was born in Regensburg, Bavaria, Germany. She is the daughter of a Romanian mother, Doina, and a German father, Hubert.[3]