The Simpson Desert is a large area of dry, red sandy plain and dunes in Northern Territory, South Australia and Queensland in central Australia.[1][2][3] It is the fourth largest Australian desert, with an area of 176,500 km2 (68,100 sq mi) and is the world's largest sand dune desert.[4]

The desert is underlain by the Great Artesian Basin, one of the largest inland drainage areas in the world. Water from the basin rises to the surface at numerous natural springs, including Dalhousie Springs, and at bores drilled along stock routes, or during petroleum exploration. As a result of exploitation by such bores, the flow of water to springs has been steadily decreasing in recent years. It is also part of the Lake Eyre basin.

The Simpson Desert is an erg which contains the world's longest parallel sand dunes.[5] These north-south oriented dunes are static, held in position by vegetation. They vary in height from 3 metres in the west to around 30 metres on the eastern side. The largest dune, Nappanerica, is 40 metres in height.[6] 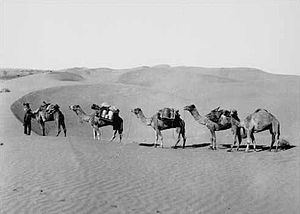 Ted Colson's expedition across the Simpson Desert in 1936 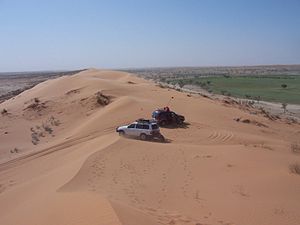 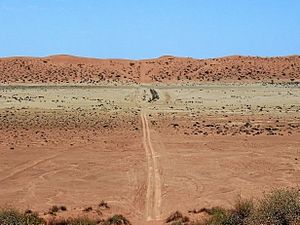 Track through the Simpson Desert 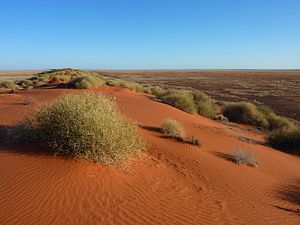 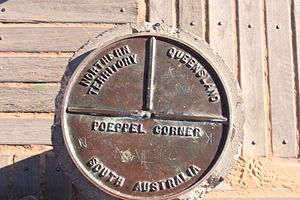 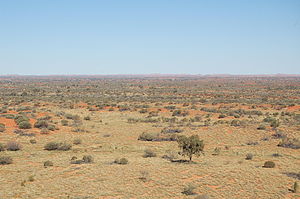 The explorer Charles Sturt,[7] who visited the region from 1844–1846, was the first European to see the desert. In 1880 Augustus Poeppel, a surveyor with the South Australian Survey Department determined the border between Queensland and South Australia to the west of Haddon Corner and in doing so marked the corner point where the States of Queensland and South Australia meet the Northern Territory. After he returned to Adelaide, it was discovered that the links in his surveyor's chain had stretched. Poeppel’s border post was too far west by 300 metres. In 1884, surveyor Larry Wells moved the post to its proper position on the eastern bank of Lake Poeppel. The tri-state border is now known as Poeppel Corner. In January 1886 surveyor David Lindsay ventured into the desert from the western edge, in the process discovering and documenting, with the help of a Wangkangurru Aboriginal man, nine native wells and travelling as far east as the Queensland/Northern Territory border. In 1936 Ted Colson became the first non-indigenous person to cross the desert in its entirety, riding camels. The name Simpson Desert was coined by Cecil Madigan,[8] after Alfred Allen Simpson, an Australian industrialist, philanthropist, geographer, and president of the South Australian branch of the Royal Geographical Society of Australasia. Mr Simpson was the owner of the Simpson washing machine company. In 2006 Lucas Trihey was the first non-indigenous person to walk across the desert through the geographical centre away from vehicle tracks and unsupported. He carried all his equipment in a two-wheeled cart and crossed from East Bore on the western edge of the desert to Birdsville in the east. In 2008, Michael Giacometti completed the first, and only, east-to-west walk across the Simpson Desert. Starting at Bedourie in Queensland, he walked solo and unsupported, towing all his equipment, food and water in a two-wheeled cart to Old Andado homestead.[9][10] Also in 2008, Belgian Louis-Philippe Loncke became the first non-indigenous person to complete a north-south crossing of the desert on foot and unsupported and through the geographical centre,.[11][12][13] In 1967, the Queensland Government established the Simpson Desert National Park.

No maintained roads cross the desert. The Donohue Highway is an unpaved outback track passing from near Boulia towards the Northern Territory border in the north of the desert. There are tracks that were created during seismic surveys in the search for gas and oil during the 1960s and 1970s. These include the French Line, the Rig Road, and the QAA Line. Such tracks are still navigable by well-equipped four-wheel-drive vehicles which must carry extra fuel and water. Towns providing access to the South Australian edge of the Simpson Desert include Innamincka to the south and Oodnadatta to the southwest; and from the eastern (Queensland) side include Birdsville, Bedourie, Thargomindah and Windorah. Last fuel on the western side is at the Mount Dare hotel and store. Before 1980, a section of the Commonwealth Railways Central Australian line passed along the western side of the Simpson Desert.

The desert is popular with tourists, particularly in winter, and popular landmarks include the ruins and mound springs at Dalhousie Springs, Purnie Bore wetlands, Approdinna Attora Knoll and Poeppel Corner (where Queensland, South Australia and Northern Territory meet). Because of the excessive heat and inadequately experienced drivers attempting to access the desert in the past, the Department of Environment and Natural Resources has decided since 2008-2009 to close the Simpson Desert during the summer — to save unprepared "adventurers" from themselves.[14][15]

The area has an extremely hot, dry desert climate. Rainfall is minimal, averaging only about 150 mm per year and falling mainly in summer. Temperatures in summer can approach 50 °C and large sand storms are common. Winters are generally cool, however, heatwaves even in the middle of July are not unheard of.

Some of the heaviest rain in decades occurred during 2009-2010, and has seen the Simpson Desert burst into life and colour. Birdsville recorded more rain in 24 hours than is usual in a whole year in early March 2010. Rain inundated Queensland’s north-west and Gulf regions. In total, 17 million megalitres of water entered the State’s western river systems leading to Lake Eyre.[16] In 2010, researchers uncovered the courses of ancient river systems under the desert.[17] 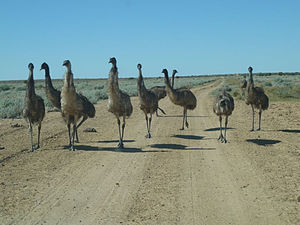 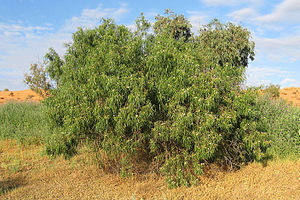 Emu bush growing in the desert 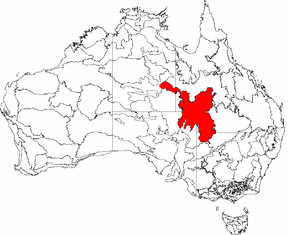 The IBRA regions, with the Channel Country in red 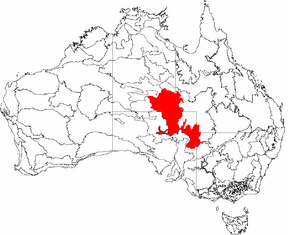 The IBRA regions, with the Simpson-Strzelecki Dunefields in red

The Simpson Desert is also a large part of the World Wildlife Fund ecoregion of the same name [18] which consists of the Channel Country and the Simpson Strzelecki Dunefields bioregions of the Interim Biogeographic Regionalisation for Australia (IBRA).[19][20]

The flora of the Simpson Desert ecoregion is limited to drought-resistant shrubs and grasses especially Zygochloa paradoxa grass that holds the dunes together and the spinifex and other tough grasses of sides slopes and sandy desert floor between the dunes. The Channel Country section of the ecoregion lies to the northeast of the desert proper around the towns of Bedourie and Windorah in Queensland, and consists of low hills covered with Mitchell grass cut through with rivers lined with coolabah trees. The ecoregion also includes areas of rocky upland and seasonally wet clay and salt pans, particularly Lake Eyre, the centre of one of the largest inland drainage systems in the world, including the Georgina and Diamantina Rivers.

Wildlife adapted to this hot, dry environment and seasonal flooding includes the water-holding frog (Litoria platycephala) and a number of reptiles that inhabit the desert grasses. Endemic mammals of the desert include the kowari (Dasycercus byrnei) while birds include the grey grasswren (Amytornis barbatus) and Eyrean grasswren (Amytornis goyderi).[21] Lake Eyre and the other seasonal wetlands are important habitats for fish and birds, especially as a breeding ground for waterbirds while the rivers are home to birds, bats and frogs. The seasonal wetlands of the ecoregion include Lake Eyre and the Coongie Lakes as well as the swamps that emerge when Cooper Creek, Strzelecki Creek and the Diamantina River are in flood. The birds that use these wetlands include the freckled duck (Stictonetta naevosa), musk duck (Biziura lobata), silver gull (Larus novaehollandiae), Australian pelican (Pelecanus conspicillatus), great egret (Ardea alba), glossy ibis (Plegadis falcinellus), and banded stilt (Cladorhynchus leucocephalus). Finally the mound springs of the Great Artesian Basin are important habitat for a number of plants, fish, snails and other invertebrates.

Native vegetation is largely intact as the desert is uninhabitable. Therefore, habitats are not threatened by agriculture, but are damaged by introduced species, particularly rabbits and feral camels. The only human activitiy in the desert proper has been the construction of the gas pipelines, while the country on its fringes has been used for cattle grazing and contains towns such as Innamincka. Mound springs and other waterholes are vulnerable to overuse and damage. Protected areas of the ecoregion include the Simpson Desert, Goneaway, Lochern, Bladensburg, Witjira and Kati Thanda-Lake Eyre National Parks as well as the Simpson Desert Conservation Park, Innamincka Regional Reserve and Simpson Desert Regional Reserve. Ethabuka Reserve is a nature reserve in the north of the desert owned and managed by Bush Heritage Australia.[22]

The extensive dunefields of the Simpson Desert display a range of colours from brilliant white to dark red and include pinks and oranges.[23] 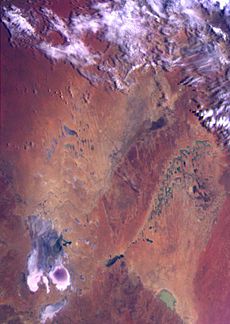 The sand ridges have a trend of SSE-NNW and continue parallel for kilometers. This pattern is seen throughout the deserts of Australia. Some of the ridges continue unbroken for up to 200 km. The height and the spacing between the ridges are directly related. Where there are 5-6 ridges in a kilometer, the height is around 15 meters but when there is one or two ridges per kilometer the height jumps to 35–38 meters. (Twidale, 1980) In cross section, the Lee side is the eastern slope with an incline of 34-38 degrees, while the Stoss side is the western slope with an incline of only 10-20 degrees. In cross section, the cross beds are planar with foresets alternating between east and west. The foresets have incline angles of 10-30 degrees. (Twidale, 1980)

The sand is predominately made up of quartz grains. The grains are rounded and sub angular. They range in size from 0.05 mm to 1.2 mm with 0.5 mm being the average size for the crests and 0.3 mm being the average size on the dune flanks. The active crests have well sorted sand sediment but on the interdunes, the sediment is not as well sorted (Twidale, 1980). The sediment varies in color from pink to brick red, but by the rivers and playas the sediment color is light grey. The progression of the color from grey to red is due to the release of iron oxide from the sediment when weathered (Twidale, 1980).