From Infogalactic: the planetary knowledge core
(Redirected from Sinkholes)
Jump to: navigation, search
For other uses, see Sinkhole (disambiguation). 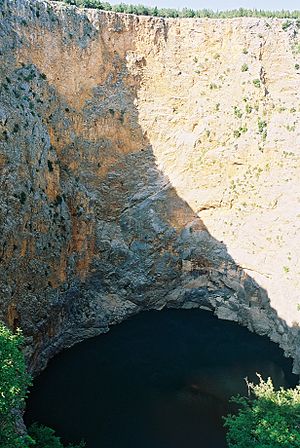 The Red Lake sinkhole in Croatia

A sinkhole, also known as a cenote, sink, sink-hole,[1] shakehole,[2] swallet, swallow hole, or doline (the different terms for sinkholes are often used interchangeably[3]), is a depression or hole in the ground caused by some form of collapse of the surface layer. Some are caused by karst processes—for example, the chemical dissolution of carbonate rocks[4] or suffosion processes.[5] Sinkholes vary in size from 1 to 600 m (3.3 to 2,000 ft) both in diameter and depth, and vary in form from soil-lined bowls to bedrock-edged chasms. Sinkholes may form gradually or suddenly, and are found worldwide.[6] On 2 July 2015, scientists reported that active pits, related to sinkhole collapses and possibly associated with outbursts, were found on the comet 67P/Churyumov-Gerasimenko by the Rosetta space probe.[7][8] 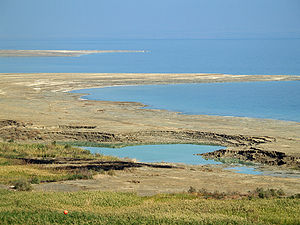 Sinkholes near the Dead Sea, formed when underground salt is dissolved by freshwater intrusion, due to continuing sea-level drop. 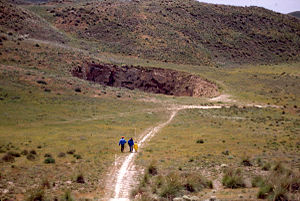 Sinkholes may capture surface drainage from running or standing water, but may also form in high and dry places in specific locations.

The formation of sinkholes involves natural processes of erosion[9] or gradual removal of slightly soluble bedrock (such as limestone) by percolating water, the collapse of a cave roof, or a lowering of the water table. Sinkholes often form through the process of suffosion. For example, groundwater may dissolve the carbonate cement holding the sandstone particles together and then carry away the lax particles, gradually forming a void.

Occasionally a sinkhole may exhibit a visible opening into a cave below. In the case of exceptionally large sinkholes, such as the Minyé sinkhole in Papua New Guinea or Cedar Sink at Mammoth Cave National Park in Kentucky, an underground stream or river may be visible across its bottom flowing from one side to the other.

Sinkholes are common where the rock below the land surface is limestone or other carbonate rock, salt beds, or in other rocks, such as gypsum,[10] that can be dissolved naturally by circulating ground water. Sinkholes also occur in sandstone and quartzite terrains.

As the rock dissolves, spaces and caverns develop underground. These sinkholes can be dramatic, because the surface land usually stays intact until there is not enough support. Then, a sudden collapse of the land surface can occur. 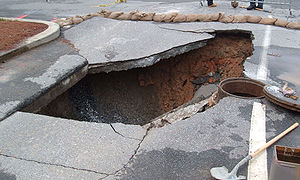 Sinkhole formed by rainwater leaking through pavement and carrying soil into a ruptured sewer pipe.

Sinkholes also form from human activity, such as the collapse of abandoned mines and salt cavern storage in salt domes in places like Louisiana, Mississippi and Texas. More commonly, sinkholes occur in urban areas due to water main breaks or sewer collapses when old pipes give way. They can also occur from the overpumping and extraction of groundwater and subsurface fluids.

Sinkholes can also form when natural water-drainage patterns are changed and new water-diversion systems are developed. Some sinkholes form when the land surface is changed, such as when industrial and runoff-storage ponds are created; the substantial weight of the new material can trigger an underground collapse of supporting material, thus causing a sinkhole. 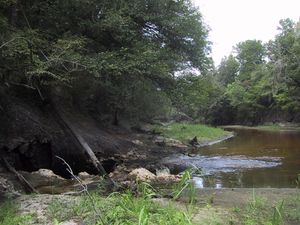 The entire surface water flow of the Alapaha River near Jennings, Florida goes into a sinkhole leading to the Floridan Aquifer groundwater

Sinkholes are frequently linked with karst landscapes. In such regions, there may be hundreds or even thousands of sinkholes in a small area so that the surface as seen from the air looks pock-marked, and there are no surface streams because all drainage occurs subsurface. Examples of karst landscapes dotted with numerous enormous sinkholes are the Khammouan Mountains (Laos) and Mamo Plateau (Papua New Guinea).[11] The largest known sinkholes formed in sandstone are Sima Humboldt and Sima Martel in Venezuela.[11]

Some sinkholes form in thick layers of homogenous limestone. Their formation is facilitated by high groundwater flow, often caused by high rainfall; such rainfall causes formation of the giant sinkholes in the Nakanaï Mountains, on the New Britain island in Papua New Guinea.[12] On the contact of limestone and insoluble rock below it, powerful underground rivers may form, creating large underground voids.

In such conditions, the largest known sinkholes of the world have formed, like the 662-metre (2,172 ft) deep Xiaozhai Tiankeng (Chongqing, China), giant sótanos in Querétaro and San Luis Potosí states in Mexico and others.[11][13]

Unusual processes have formed the enormous sinkholes of Sistema Zacatón in Tamaulipas (Mexico), where more than 20 sinkholes and other karst formations have been shaped by volcanically heated, acidic groundwater.[14][15] This has produced not only the formation of the deepest water-filled sinkhole in the world—Zacatón—but also unique processes of travertine sedimentation in upper parts of sinkholes, leading to sealing of these sinkholes with travertine lids.[15]

The state of Florida in the United States is known for having frequent sinkhole collapses, especially in the central part of the state. The Murge area in southern Italy also has numerous sinkholes. Sinkholes can be formed in retention ponds from large amounts of rain.[16][further explanation needed]

Sinkholes have been used for centuries as disposal sites for various forms of waste. A consequence of this is the pollution of groundwater resources, with serious health implications in such areas. The Maya civilization sometimes used sinkholes in the Yucatán Peninsula (known as cenotes) as places to deposit precious items and human sacrifices.[citation needed]

When sinkholes are very deep or connected to caves, they may offer challenges for experienced cavers or, when water-filled, divers. Some of the most spectacular are the Zacatón cenote in Mexico (the world's deepest water-filled sinkhole), the Boesmansgat sinkhole in South Africa, Sarisariñama tepuy in Venezuela, the Sótano del Barro in Mexico, and in the town of Mount Gambier, South Australia. Sinkholes that form in coral reefs and islands that collapse to enormous depths are known as blue holes and often become popular diving spots.[17] 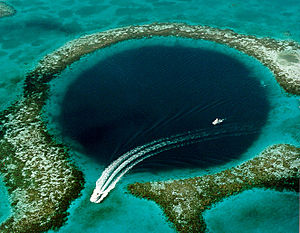 Large and visually unusual sinkholes have been well-known to local people since ancient times. Nowadays sinkholes are grouped and named in site-specific or generic names. Some examples of such names are listed below.[18]

The 2010 Guatemala City sinkhole formed suddenly in May of that year; torrential rains from Tropical Storm Agatha and a bad drainage system were blamed for its creation. It swallowed a three-story building and a house; it measured approximately 20 m (66 ft) wide and 30 m (98 ft) deep. A similar hole had formed nearby in February 2007.[21][22][23]

The Guatemala City holes are instead an example of "piping pseudokarst", created by the collapse of large cavities that had developed in the weak, crumbly Quaternary volcanic deposits underlying the city. Although weak and crumbly, these volcanic deposits have enough cohesion to allow them to stand in vertical faces and to develop large subterranean voids within them. A process called "soil piping" first created large underground voids, as water from leaking water mains flowed through these volcanic deposits and mechanically washed fine volcanic materials out of them, then progressively eroded and removed coarser materials. Eventually, these underground voids became large enough that their roofs collapsed to create large holes.[24] 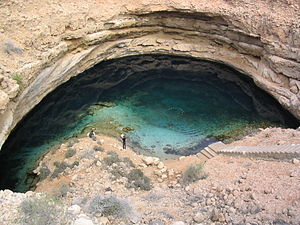 Some of the largest sinkholes in the world are:[11]