Sinop (Greek: Σινώπη, Sinōpē, historically known as Sinope /sᵻˈnoʊpi/) is a city with a population of 36,734 on the isthmus of İnce Burun (İnceburun, Cape Ince), near Cape Sinope (Sinop Burnu, Boztepe Cape, Boztepe Burnu) which is situated on the most northern edge of the Turkish side of the Black Sea coast, in the ancient region of Paphlagonia, in modern-day northern Turkey. The city serves as the capital of Sinop Province.

Long used as a Hittite port, which appears in Hittite sources as "Sinuwa",[3] the city proper was re-founded as a Greek colony from the city of Miletus in the 7th century BC.[4] Sinope flourished as the Black Sea port of a caravan route that led from the upper Euphrates valley.[5] It issued its own coinage, founded colonies, and gave its name to a red earth pigment called sinopia, which was mined in Cappadocia for use throughout the ancient world.[6]

Sinope escaped Persian domination until the early 4th century BC. It was ruled by Scydrothemis from 301 to 280 BC. In 183 BC it was captured by Pharnaces I and became capital of the Kingdom of Pontus. The Roman general Lucullus conquered Sinope in 70 BC, and Julius Caesar established a Roman colony there, Colonia Julia Felix, in 47 BC. Mithradates Eupator was born and buried at Sinope, and it was the birthplace of Diogenes, of Diphilus, poet and actor of the New Attic comedy, of the historian Baton, and of the Christian heretic of the 2nd century AD, Marcion.

After the division of the Roman Empire in 395, Sinope remained with the Eastern Roman or Byzantine Empire. Its history in the early Byzantine period is obscure, except for isolated events: it was used by Justinian II as a base from which to reconnoitre Cherson, participated in the rebellion of the Armeniac Theme in 793, was the site of Theophobos' proclamation as emperor by his Khurramite troops in 838, and suffered its only attack by the Arabs in 858.[7]

In 1081, the city was captured by the Seljuk Turks, who found there a sizeable treasury, but Sinope was soon recovered by Alexios I Komnenos, ushering a period of prosperity under the Komnenian dynasty.[7] After the sacking of Constantinople by the Fourth Crusade in 1204, it was captured for the Empire of Trebizond by David Komnenos, until the Seljuk Turks of Rûm successfully captured the city in 1214.[7][8] The city returned briefly to Trapezuntine rule in 1254, but returned to Turkish control in 1265, where it has remained since.[7]

After 1265, Sinop became home to two successive independent emirates following the fall of the Seljuks: the Pervâne and the Jandarids. The Ottoman Sultan Mehmet II overawed Ismail, the emir of Sinope on his march on Trebizond, and forced him to surrender the city to the Sultan late June 1461 without a fight. The emir was exiled to Philippopolis (modern Plovdiv) in northern Thrace.[9]

In November 1853, at the start of the Crimean War, in the Battle of Sinop, the Russians, under the command of Admiral Nakhimov, destroyed an Ottoman frigate squadron in Sinop, leading Britain and France to declare war on Russia.

In the late 19th and early 20th century, Sinop was part of the Kastamonu Vilayet of the Ottoman Empire.

As of 1920, Sinop was described as populated mainly by Greeks with an approximate population of 8,000. It was also considered the "safest" port "between Bosphorus and Batum," at the time. During this period, the port was exporting wheat, tobacco, seeds, timber and hides. They imported produce, coal and hardware.[10]

Sinop hosted a US military base that was important for intelligence during the cold war era. The US base was closed in 1992.

Explorer Bob Ballard discovered an ancient ship wreck north west of Sinop in the Black Sea and was shown on National Geographic.

As of 1920, Sinop was producing embroidered cotton cloth. They also were known for boatbuilding. The British described the boats produced in Sinop as being of "primitive design but sound workmanship."[14]

Sinop is currently slated to be the site of the Sinop Nuclear Power Plant, a $15.8 billion nuclear power plant being developed by Elektrik Üretim, Engie, Mitsubishi Heavy Industries and Itochu. The plant will consist of four reactors, with construction to begin as early as 2017 and completion by 2028.[15] 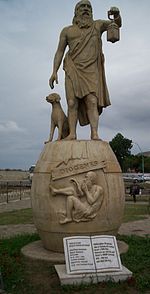 Statue of Diogenes at Sinop

Sinope has given its name to the outermost satellite of Jupiter. A crater on Mars is named after Sinop.