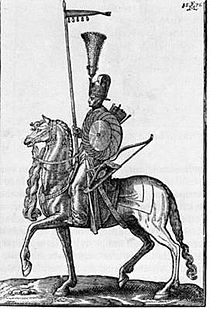 A Sipahi, from a 16th-century Western engraving

sipahi (Ottoman Turkish: سپاهی sipâhi‎, Turkish pronunciation: [sipaːhi]) were two types of Ottoman cavalry corps, including the fief-holding provincial timarli sipahi, which constituted most of the army, and the regular kapikulu sipahi, palace troops. Other types of cavalry which were not regarded sipahi were the irregular akıncı ("raiders"). The sipahi formed their own distinctive social classes, and were notably in rivalry with the Janissaries, the elite corps of the Sultan.

It was also the title given to several cavalry units serving in the French and Italian colonial armies during the 19th and 20th centuries (see Spahi).

The word is derived from Persian sepâhi (سپاهی,), meaning "soldier". The term is also transliterated as spahi and spahee; rendered in other languages as: spahiu (in Albanian), spahis (Σπαχής, in Greek), spahija or spahiya (in Serbo-Croatian, Bulgarian and Macedonian; Cyrillic спахија, спахия).

According to some historians, the explanation of the sipahi system, at the height of the Ottoman Empire, Süleyman's reign, the flexibility of the federal dictatorship, where the Sultan was supreme, the prefecture system was genius and merit based.

The provincial governors, or beys, were rotated every few years, preventing land inheritance. The provinces, or sanjaks, were not all equal since Anatolia and the Balkans were mostly ruled by Turks, while other areas of the empire were more flexible, adhering, somewhat, to local traditions.

The entwinement of land, military, politics, economics and religion was a way of life. The timar system, where the sultan owned all land but individual plots of land, came with residential rights. The Ottoman people had rights to the land but the sipahi, a unique kind of military aristocracy and cavalry portion of the military, also lived on the land with the farmers (90% of the population) and collected tax revenues, usually in-kind, to subsidize the costs of training and equipping the small army, dedicated to serving the sultan. The sipahi did not inherit anything, preventing power centres from growing and threatening the supreme power structure. The locals on the timar used the land and all it produced.[1] 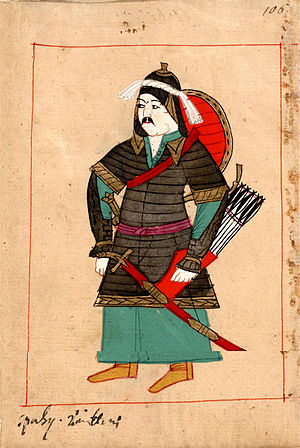 Miniature depicting an Anatolian Timariot, dating to before 1657.

The "Timarli Sipahi" or "timariot" (tımarlı) was the holder of a fief of land (تيمار tîmâr) granted directly by the Ottoman sultan or with his official permission by beylerbeys. He was entitled to all of the income from that land, in return for military service. The peasants on the land were subsequently attached thereto. Timarli Sipahis' status resembled that of the knights of medieval Europe. Unlike medieval knights, they were not legally owners of their fiefs. The right to govern and collect taxes in a timar fief was merely given to a Timarli Sipahi by the Ottoman State. And in return, tımarli sipahis were responsible for security of the people in their timar, enlisting and training cebelu soldiers for the army.

A tîmâr was the smallest unit of land held by a Sipahi, providing a yearly revenue of no more than 20,000 akçe, which was between two and four times what a teacher earned. A ziamet (زعامت) was a larger unit of land, yielding up to 100,000 akçe, and was owned by Sipahis of officer rank. A has (خاص) was the largest unit of land, giving revenues of more than 100,000 akçe, and was only held by the highest-ranking members of the military. A tîmâr Sipahi was obliged to provide the army with up to five armed retainers (cebelu), a ziamet Sipahi with up to twenty, and a has Sipahi with far more than twenty. The cebelu (meaning "armed, armored") were expected to be mounted and fully equipped as the sipahi themselves; they were usually sons, brothers or nephews and their position was probably more similar to squires than men-at-arms.

The sipahi were traditionally recruited among Turkic landowners, and thus, the non-Turkic provinces such as Arabia and Maghreb did not have sipahi. Recruitment of non-Turkic sipahi was banned with a 1635 ferman (decree). In contrast to the Jannisaries, Timarli Sipahis from that time onwards were Turks (Muslims). A rivalry between Jannisaries, who controlled the central bureaucracy of the empire and had a lot of political influence, and sipahis, who controlled the provincial bureaucracy and had the power of the army, prevented them from cooperating against the House of Osman.

In wartime, Timarli sipahis and their retainers were gathered under their alay (regiment) beys. Alay-beys were gathered with their troops under sanjak (province) beys, and sanjak-beys gathered under beylerbeys. If a battle was to be fought in Europe, Rumeli (Balkan) Sipahis took the honorary right flank under the Rumeli beylerbey, while the Anatolian beylerbey and his Sipahis took the left flank; when a battle was in Asia, positions were switched. This way, the Ottoman classical army's flanks wholly consisted of Timariot cavalry, while the center consisted of Janissary infantry and artillery divisions. 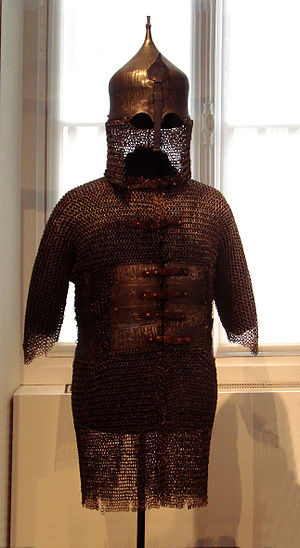 The equipment and tactics differed between the Anatolian and Balkan Timarli Sipahi. The Anatolian Sipahi were equipped and fought as classic horse archers, shooting while galloping, yet they weren't nomadic cavalry and their status was similar to medium cavalry class. Balkan Timarli Sipahis wore chainmail, rode barded horses and carried lances and javelins, and fought as medium cavalry.

Timarli Sipahis of the classical Ottoman period usually comprised the bulk of the army and did the majority of the fighting on the battlefield. While infantry troops at the army's center maintained a static battle line, the cavalry flanks constituted its mobile striking arm. During battle, Timarli Sipahi tactics were used, opening the conflict with skirmishes and localized skirmishes with enemy cavalry. Regiments of Timarli Sipahis made charges against weaker or isolated units and retreated back to the main body of troops whenever confronted with heavy cavalry. During one regiment's retreat, other regiments of sipahis may have charged the chasing enemy's flanks. Such tactics served to draw enemy cavalry away from infantry support, break their cohesion, and isolate and overwhelm them with numerical superiority. Anatolian Sipahis had the ability to harass and provoke opposing troops with arrow shots. More heavily equipped Balkan Sipahis carried javelins for protection against enemy horsemen during their tactical retreats. All cavalry flanks of the Ottoman army fought a fluid, mounted type of warfare around the center of the army, which served as a stable pivot.

The standard equipment of Rumeli Sipahis of the classical Ottoman period consisted of a round shield, lance, sword, javelins and plated chainmail. Their horses were barded. Standard equipment of Anatolian Sipahis in the same era was a round shield, composite Turkish bow, arrows, kilij (Turkish sword) and leather or felt armor. Besides these, Sipahis of both provinces were equipped with bozdogan and şeşper maces, and aydogan, teber and sagir axes. Anatolian Sipahis sometimes also carried lances.

Silahtars ("weapon masters") were chosen from the best warriors in the Ottoman Empire. Any Ottoman soldier who committed a significant deed on the battlefield could be promoted to the Silahtar division, although normally members of other mounted units, like Timarli Sipahis or one of the other less prestigious of the four divisions of Kapikulu Sipahis, were promoted this way. Infantry soldiers had to enlist as serdengecti (literally means giver of his head) and survive suicide missions to join Silahtar division. If a janissary ever became a silahtar, other members of the division with cavalry backgrounds despised him and former comrade janissaries considered him a traitor, but because the position and wealth of a silahtar was so attractive, janissaries and other soldiers still enlisted for suicide missions.

The commander of the Silahtar division was the Silahtar Agha. He was the official weaponsmaster of the palace and a close personal aide of the sultan, helping him to don his armor. He was also a liaison officer who supervised the communication between the sultan and the Grand Vizier.

The Sipahi division was the most prestigious of the six divisions. Traditionally, sons of Ottoman élite (sons of Vezirs, Pashas and Beys) served in this unit. The Sipahis and Silahtars were granted timar fiefs near Istanbul, alongside their salaries. Ulufeci means "salaried ones", and the members of two Ulufeci divisions weren't granted timar fiefs. Garip means "poor ones" (because their equipment was lighter compared to the other four divisions) and were paid salaries.

The six divisions of Sipahis represented the Kapikulu cavalry in the same way that the Janissaries represented the Kapikulu infantry. Kapikulu means servant of the Porte. Servants of the Porte (Kapikullari) were legally servants of the Ottoman throne. They weren't literally slaves, though their legal status was different from other Ottoman people. The Sultan had the power to directly command execution of his servants without any court verdict. Theoretically, the Sultan didn't have this kind of power over other people, even simple peasants. If a freeman was promoted to one of Kapikulu Sipahi divisions, he considered automatically switched to kul (servant) status.

In the classical period Ottoman battle formation, Kapikulu Sipahis were positioned back of the army as rearguards. They acted as reserve cavalry and bodyguards of Ottoman sultan and vezirs. Their job included to join and reinforce Ottoman army's flanks which otherwise consisted entirely provincial timariot sipahis.

The Sipahis of the Porte (Kapikulu Sipahis) were originally founded during the reign of Murad I. Although the Sipahis of the Porte were originally recruited, like the Janissaries, using the devşirme system,[2] by the time of Sultan Mehmed II, their ranks were only chosen from among the ethnic Turks who owned land within imperial borders. The Sipahi eventually became the largest of the six divisions of the Ottoman cavalry. The duties of the Sipahis included riding with the sultan on parades and as a mounted bodyguard. Earlier times Silahtar division was accompanied sultan on parades, though The Sipahi division took their place because sons of Ottoman "aristocracy" exclusively joined this regiment.

Rivalry with the janissary corps

Since Kapikulu Sipahis were a cavalry regiment it was well known within the Ottoman military circles that they considered themselves a superior stock of soldiers than Janissaries, who were sons of Christian peasants from the Balkans (Rumelia), and were basically slaves bounded by various laws of the devşirme.

Whereas the Sipahis (both Tımarlı and Kapıkulu) were almost exclusively chosen amongst ethnic Turkic landowners, they made great strides of efforts to gain respect within the Ottoman Empire and their political reputation depended on the mistakes of the Janissary. That minor quarrels erupted between the two units is made evident with a Turkmen adage, still used today within Turkey, "Atlı er başkaldırmaz", which, referring to the unruly Janissaries, translates into "Horsemen don't mutiny".

Towards the middle of the 16th century, the Janissaries had started to gain more importance in the army, though the Sipahis remained an important factor in the empire's bureaucracy, economy and politics, and a crucial aspect of disciplined leadership within the army. As late as the 17th century, the Sipahis were, together with their rivals the Janissaries, the de facto rulers in the early years of sultan Murad IV's reign. In 1826, after an evident Janissary revolt the Sipahis played an important part in the disbandment of the Janissary corps. The Sultan received critical assistance from the loyalist Sipahi cavalry in order to forcefully dismiss the infuriated Janissaries.

Two years later, however, they shared a similar fate when Sultan Mahmud II revoked their privileges and dismissed them in favor of a more modern military structure. Unlike the Janissaries before them they retired honorably, peacefully, and without bloodshed into new Ottoman cavalry divisions who followed modern military tradition doctrines. Older sipahis were allowed to retire and keep their tımar lands until they died, and younger sipahis joined the Asakir-i Mansure-i Muhammediye army as cavalry.