From Infogalactic: the planetary knowledge core
Jump to: navigation, search
This article is about the title and honorific. For other uses, see Sir (disambiguation).

Sir is an honorific address used in a number of situations in many anglophone cultures. The term can be used as a formal prefix, especially in the Commonwealth, for males who have been given certain honors or titles (such as knights and baronets), where usage is strictly governed by law and custom.

The term is commonly used as a respectful way to address a man, usually of superior social status or military rank. Equivalent terms of address to females are "ma'am" or "madam" in most cases, or in the case of a very young woman, girl, or unmarried woman who prefers to be addressed as such, "miss". The equivalent term for a knighted woman or baronetess is Dame, or "Lady" for the wife of a knight or baronet.

The form "sir" is first documented in English in 1297, as title of honor of a knight, and latterly a baronet, being a variant of sire, which was already used in English since at least c.1205 as a title placed before a name and denoting knighthood, and to address the (male) Sovereign since c.1225, with additional general senses of "father, male parent" is from c.1250 and "important elderly man" from 1362. 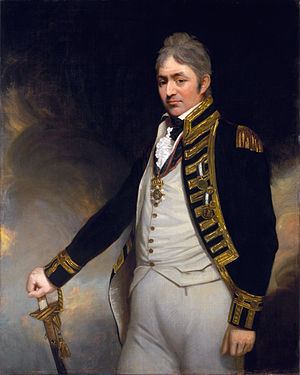 Sir Thomas Troubridge, 1st Baronet. His entitlement to the style of "sir" derived from his position as a baronet.

The equivalent for a female who holds a knighthood or baronetcy in her own right is "dame", and follows the same usage customs as "sir".[3] Although this form was previously also used for the wives of knights and baronets, it is now customary to refer to them as "Lady", followed by their surname; they are never addressed using their full names. For example, while Lady Fiennes is correct, Lady Virginia and Lady Virginia Fiennes are not.[4][5] The widows of knights retain the style of wives of knights,[5] however widows of baronets are either referred to as 'dowager', or use their forename before their courtesy style. For example, the widow of Sir Thomas Herbert Cochrane Troubridge, 4th Baronet, would either be known as Dowager Lady Troubridge or Laura, Lady Troubridge.[6]

Combinations with other titles and styles

In the case of a military officer who is also a knight, the appropriate form of address puts the professional military rank first, then the correct manner of address for the individual, then his name. Examples include:

This is also the case with academic titles, such as professor. For example, Patrick Bateson is both a professor and a knight bachelor; his correct title would be Professor Sir Patrick Bateson. The title of Doctor, however, is not used in combination with "sir", with the knighthood taking precedence. Knighted doctors are addressed as knights, though they may still use any postnominal letters associated with their degrees.

Church of England clergy who receive knighthoods do not use the title Sir, but instead refer to their knighthood using postnominal letters.[2] For example, the Reverend Dr John Polkinghorne, KBE is never referred to as Sir John Polkinghorne. Clergy of other denominations may use different conventions.[2]

Peers who have been knighted are not addressed as "Sir" in the formal sense of the style, as their titles of nobility take precedence. If the heir apparent to a peerage himself holds a courtesy title and has been knighted, the same principle applies to him, as well as to the male heirs of a duke or a marquess, who are styled "Lord X." For instance, diplomat Lord Nicholas Gordon-Lennox, KCMG, KCVO, who was a younger son of the Duke of Richmond, continued to be styled as "Lord Nicholas" following his knighthood in 1986, not "Lord Sir Nicholas." The male heirs of an earl, viscount or baron who lack courtesy titles do however use the style of "Sir" if knighted, the style following that of "The Hon.". 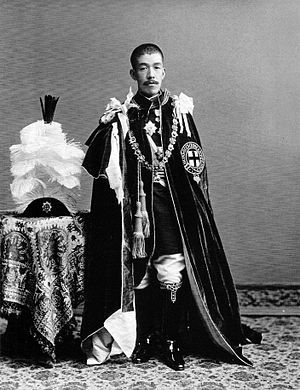 Emperor Taishō in the robes of the Order of the Garter, as a consequence of the Anglo-Japanese Alliance. As a foreign national he was not entitled to use the prefix "sir", but could use the post-nominal letters KG after his name.

Today, in the UK and in certain Commonwealth realms , a number of men are entitled to the prefix of 'sir', including knights bachelor, knights of the orders of chivalry and baronets; although foreign nationals can be awarded these honours, they are explicitly excluded using the prefix, instead using the associated post-nominal letters.[9]

Dual nationals holding a Commonwealth citizenship that recognise the British monarch as head of state are entitled to use the styling. Common usage varies from country to country: for instance, dual Bahamian-American citizen Sidney Poitier, knighted in 1974, is often styled "Sir Sidney Poitier", particularly in connection with his official ambassadorial duties, although he himself rarely employs the title. 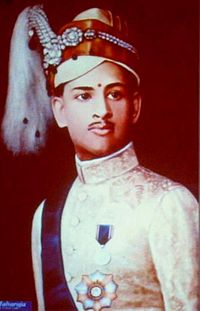 Established in 1783 and primarily awarded to men associated with the Kingdom of Ireland, Knight of the Order of St. Patrick were entitled to the style of "sir". Regular creation of new knights of the order ended in 1921 upon the formation of the Irish Free State. With the death of the last knight in 1974, the Order became dormant.

Educational, military and other usage

Usage within the education system

"Sir", along with miss for females, is commonly used in the British school system to address teachers; and or members of faculty as well as staff. Usage of these terms is considered a mark of respect and can be dated back to the 16th century. The practice may have been an attempt to reinforce the authority of teachers from lower social classes among classes of largely upper class students.[14] Jennifer Coates, emeritus professor of English language and linguistics at Roehampton University has criticized the use of the title for male teachers, saying that “Sir is a knight. There weren’t women knights, but ‘Miss’ is ridiculous: it doesn’t match ‘Sir’ at all. It’s just one of the names you can call an unmarried woman” and that “It’s a depressing example of how women are given low status and men, no matter how young or new in the job they are, are given high status.”[14]

In the Southern United States, the term "sir" is often used to address someone in a position of authority or respect and is commonly used in schools and universities by students to address their teachers and professors. Whereas the British and Commonwealth female equivalent is miss, students will often refer to female teachers as ma'am.[15]

Usage within the military and police

Usage within the service industry

The term "sir" is also used frequently in the customer service industry, by employees to refer to customers, and sometimes vice-versa. In the USA, it is much more common in certain areas (even when addressing male peers or men considerably younger). For example, a 1980 study showed that 80% of service interactions in the South were accompanied by "sir" or ma'am in comparison to the Northern United States, where "sir" was only used 25% of the time.[15]