Frederick Treves was born 15 February 1853 in Dorchester, Dorset, the son of William Treves, an upholsterer, and his wife, Jane (née Knight).[2] As a small boy, he attended the school run by the Dorset dialect poet, William Barnes, and later the Merchant Taylors' School and London Hospital Medical College. He passed the membership examinations for the Royal College of Surgeons of England in 1875 and in 1878 for the fellowship of the Royal College of Surgeons (FRCS).

He was a Knight of Grace of the Order of St John.

He married Ann Elizabeth Mason in 1877.

Treves became a surgeon, specialising in abdominal surgery, at the London Hospital in the late nineteenth and early twentieth century. He performed the first appendectomy in England, on 29 June 1888. He was appointed a Surgeon Extraordinary to Queen Victoria.[3]

In 1884, Treves first saw Joseph Merrick, known as the Elephant Man, being exhibited by showman Tom Norman in a shop across the road from the London Hospital.[4] Around 1886 Treves brought Merrick to the London Hospital where Merrick lived until his death in April 1890. Treves' reminiscences mistakenly names Joseph Merrick as John Merrick, an error widely recirculated by biographers of Merrick.

During the Second Boer War (1899–1902), Treves volunteered to work at a field hospital in South Africa treating the wounded. He later published an account of his experiences in The Tale of a Field Hospital, based on articles written at the time for the British Medical Journal.[5] Treves was also Medical Officer to the Suffolk Yeomanry until he resigned in May 1902.[6]

In late March 1901, Treves was appointed one of several Honorary Serjeants Surgeon to King Edward VII,[7] and in May the same year was knighted as a Knight Commander of the Royal Victorian Order (KCVO).[8] The coronation of the new king was scheduled for 26 June, but on 24 June, Edward was diagnosed with appendicitis. Treves, with the support of the leading surgical authority, Lord Lister, performed a then-radical operation of draining the infected appendiceal abscess through a small incision and leaving the appendix intact.[9] This was at a time when appendicitis was generally not treated operatively and carried a high mortality rate.[10] The King had opposed surgery for this reason but Treves insisted, stating that if he was not permitted to operate, there would instead be a funeral.[11] The next day, Edward was sitting up in bed, smoking a cigar.[12] He wrote in subsequent account of his surgical work which was also reported in the Lancet:

"I have never known anyone more clumsy with his fingers than the King and to see him use this great weapon for this small purpose was really alarming.[13][14]

In January 1902, the King was treated for an Achilles tendon, and then in June he found a "hard swelling in the abdomen."[15] Treves did not remove the abscess, which was perityphlitis,[16] and inflammation around the appendix which required draining.[17] But the day of the operation the palace announced the coronation was postponed indefinitely. For this operation, Treves was honoured with a baronetcy (which Edward had arranged before the operation)[18] and appendix surgery entered the medical mainstream in the UK. He was granted the use of Thatched House Lodge in Richmond Park and was subsequently able to take early retirement, but continued as Serjeant Surgeon to the King and to the Royal Household until 1910. He published a book about his experiences of the king's illnesses, shortly after the coronation. Dr Treves continued to serve the royal family. In November 1905, the King fell down a rabbit hole straining the Achilles tendon, for which he was fitted with an iron splint.[19]

Treves was also the author of many books, including The Elephant Man and Other Reminiscences (1923), Surgically Applied Anatomy (1883), The Highways and Byways of Dorset (the county in which he was born) (1906), A Student's Handbook of Surgical Operations (1892), Uganda for a Holiday, The Land That is Desolate, and The Cradle of the Deep (1908). This last volume is an account of his travels in the West Indies, interspersed with portions of their histories; describing (among other things) the death of Blackbeard the pirate, an eruption of Mount Pelée (which destroyed the city of St. Pierre, Martinique), and a powerful earthquake at Kingston, Jamaica, shortly before he landed there. He was also chairman of the Executive Committee from 1905 to 1912 of the British Red Cross, and was the first president of the Society of Dorset Men. From 1905–8, he was Rector of the University of Aberdeen.

Around 1920 Sir Frederick went to live in Switzerland where he died in Lausanne on 7 December 1923 at the age of 70. He died from peritonitis, which, ironically, in the days before antibiotics commonly resulted from a ruptured appendix. His funeral took place at St Peter's church, Dorchester on 2 January 1924 and the King and Queen were represented by the Physician-in-Ordinary, Lord Dawson. His lifelong friend Thomas Hardy attended and chose the hymns.[20] Hardy also wrote a poem for the occasion which was published in The Times. It started with the words: "In the evening, when the world knew he was dead". His ashes were buried in Dorchester (Fordington) cemetery. 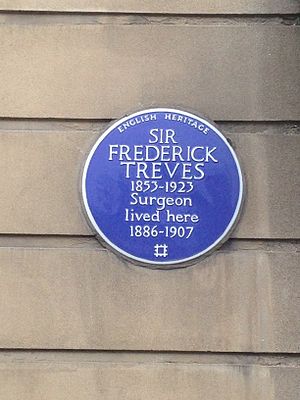 Treves is one of the main characters in The Elephant Man, Bernard Pomerance's 1977 play about Joseph Merrick's life, as well as David Lynch's 1980 film, in which he was portrayed by Anthony Hopkins. In that film, the English actor Frederick Treves, Sir Frederick's great-nephew, plays an alderman. Working at the London Hospital and coming into contact with criminal cases, he is also depicted by Paul Ready in the BBC historical crime drama Ripper Street, set in the East End in the 1890s.

In real life, Sir Frederick Treves appeared as himself amongst other society Britons helping out with the war effort in D. W. Griffith's silent film The Great Love (1918). The Great Love is a lost film.[21]