He was educated at Ottawa and at University of Trinity College.[citation needed] Parker started as a teacher at the Ontario School for the deaf and dumb (in Belleville, Ontario). From there he went on to lecture at Trinity College. In 1886 he went to Australia, and for a while became associate editor of the Sydney Morning Herald. He also traveled extensively in the Pacific, Europe, Asia, Egypt, the South Sea Islands and subsequently in northern Canada. In the early nineties he began to gain a growing reputation in London as a writer of romantic fiction.

The best of his novels are those in which he first took for his subject the history and life of the French Canadians; and his permanent literary reputation rests on the fine quality, descriptive and dramatic, of his Canadian stories. Pierre and his People (1892) was followed by Mrs. Falchion (1893), The Trail of the Sword (1894), When Valmond came to Pontiac (1895), An Adventurer of Icy North (1895), and The Seats of the Mighty (1896, dramatized in 1897). The Seats of the Mighty was a historical novel depicting the English conquest of Quebec with James Wolfe and the Marquis de Montcalm as two of the characters. The Lane that Had No Turning (1900), a collection of short stories set in the fictional Quebec town of Pontiac, contains some of his best work, and is viewed by some as being in the tradition of such Gothic classics as Stoker's Dracula and James's The Turn of the Screw.[3] In The Battle of the Strong (1898) he broke new ground, laying his scene in the Channel Islands. His chief later books were The Right of Way (1901), Donovan Pasha (1902), The Ladder of Swords (1904), The Weavers (1907), Northern Lights (1909) and The Judgment House (1913). Parker had three that made it into the top 10 on the annual list of bestselling novels in the United States, two of which were on it for two years in a row. The 1905 New International Encyclopaedia claimed that it was the "dramatic quality of his . . . books [which] won for them [their] considerable popularity, despite their disregard of truth in local color."[4]

Sir Gilbert Parker is known for his poetry, in particular the sonnet Reunited .

The English composer Sir Edward Elgar set to music three of Parker's romantic poems: Oh, soft was the song, Twilight, Was it some Golden Star? in 1910, as fpart of an uncompleted song-cycle, his Op. 59. Elgar also set to music his little poem Inside the Bar, written in 1917 as a sequel to his setting of Kipling's wartime nautical poems in The Fringes of the Fleet. 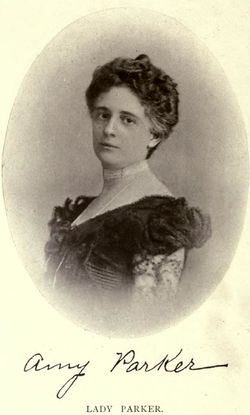 His Canadian connection and his experience in Australia and elsewhere had made him a strong Imperialist in politics, and from that time he began to devote himself in large measure to a political career. He still kept up his literary work, but some of the books last mentioned cannot compare with those by which he made his name.[citation needed] He was elected to the British House of Commons as a Conservative member for Gravesend and remained MP until 1918.

He was knighted by King Edward, in 1902 for his service to Canadian literature, and in succeeding years continually strengthened his position in the party, particularly by his energetic work on behalf of Tariff Reform and Imperial Preference. During World War I he organized British publicity toward the United States. He was created a baronet on 21 June 1915 and appointed as a Privy Councillor in 1916.

In May 1905, Parker publicly claimed to have seen a "vision" of fellow house member, Frederic Carne Rasch, despite the fact that Rasch had passed on, of an illness at his home.[citation needed]

He died in London (England) on 6 September 1932[6] and on 26 September he was buried in Belleville, Ontario. One of the honorary pallbearers was then Prime Minister of Canada, Richard Bedford Bennett.

The British put forth a large effort to find an able and persuasive writer to effectively communicate with the Americans. They decided to use Sir Gilbert Parker. The British supplied Parker with a "large propaganda office" to plan, write, and distribute the new technique of British propaganda. His main objective was to create new relationships and hold onto existing ones with American citizens. His writings, known as the "White Papers," were sent into the New York Times in 1914. The subheading of the article read, "A Modest Appeal from Sir Gilbert Parker to read the British Side." To do this, Gilbert showered the American people with writings from people such as Kipling, Wells, Galsworthy, Arnold Bennett, and George Bernard Shaw.

Using his fame and character, Sir Gilbert Parker flattered the American press with eloquent words and compliments. He called the Americans "fighting people". He also said that "this war will prove them to have everything that they have always had—courage, swiftness if conception, capacity to perform, and a lightning-like directness." His writings essentially "educated" the one source that he knew would reach the majority of Americans. However, he didn't stop there: he continued to spread his "knowledge" by distributing "propaganda material" to American libraries, educational institutions, and periodicals. While focusing on professional establishments he continued to create personal relationships with American elites such as college professors, scientists, doctors, politicians, etc. His method of establishing personal relationships was a landmark later used in other methods of propaganda, "it was the complete and skillful technique later to be developed by many other propagandists, lobbyists, and public relations council."[citation needed]

"Practically since the day war broke out I was responsible for American publicity."[7] Parker played a crucial and significant role in British propaganda during World War I. Due to his strategic marriage to Amy VanTine, reputation as a writer, and social status among the American people, he had established many friendships with influential Americans in all professions. 2 September 1914, Parker was chosen by Charles Masterman and the British government to head the subdivision of Wellington House that was responsible for American propaganda. He was unpaid and had no formal title for this role. His goal was to convince America to support the British cause in the war. He worked with the theory that the British cause could not be accomplished through "violent wooing," but must instead be efforts of "gentle and modest courtship."

His activities at the beginning of World War I included performing a long analysis of the American press and establishing a mailing list based on the American Who’s Who. His mailing list including 260,000 influential Americans as well as public libraries, Y.M.C.A.’s, Universities, Colleges, clubs, and newspapers. He sent propaganda literature that was generated by Wellington House to those on his mailing list, but the letters only carried Parker’s name, never mentioning Wellington House or the British government. An example of one of his many letters is as follows:


I am well aware that American enterprise has made available reprints of the official papers relating to the present European war; but the original British prints of these publications may not be accessible to those persons of influence who would study them for a true history of the conflict. I am venturing to send to you under another cover several of these official documents. I am sure you will not consider this an impertinence, but will realize that Britishers are deeply anxious that their cause may be judged from authoritative evidence.


In common with the great majority of Americans, you have, no doubt, made up your mind as to what country should be held responsible for this tragedy, but these papers may be found useful for reference, and because they contain the incontrovertible facts, I feel that you will probably welcome them in this form.


My long and intimate association with the United States through my writings gives me confidence to approach you, and I trust you will not think me intrusive or misunderstand my motive.


With all respect,
I am,
Yours very truly,
Gilbert Parker

Each publication he sent had a personal letter enclosed in order to portray him as an English patriot performing his duty. His objective was to gain the trust of Americans by appearing friendly and honest. He wrote in a tone that suggested he was a supporter of the British cause, but desired to promote international understanding, and that he was open to hearing all viewpoints. This tactic convinced many Americans that their role in the war was important, and many sympathized with the British cause as a result of his efforts.

Parker continued his propaganda efforts up until the year the United States entered the war, 1917. At the beginning of 1917, he visited the United States to meet with Americans he had been corresponding with. On 3 February 1917, President Woodrow Wilson made a speech during Parker's visit that severed diplomatic ties with Germany. The U.S. had almost declared war and Parker believed that he had fulfilled his responsibilities. Later that same day, he resigned from his position at Wellington House, due to, he said, his failing health.

All of Wellington House’s activities were kept in complete secrecy. This increased the credibility of their publications, because they could not be traced back to any official sources. Parker’s letters concealed their connection and origin with the British government, and his American contacts never realized they were being manipulated. Today his influence on the First World War and America’s entry into it is often overlooked, even by seemingly comprehensive propaganda analysis.