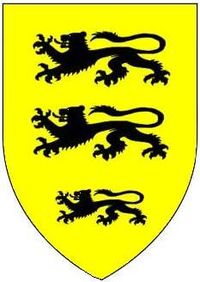 Arms of Carew: Or, 3 lions passant in pale sable[1] These were the arms shown on the seal of "Nicholas de Carreu" (c.1255–1311), appended to the Barons' Letter, 1301, which he joined as "Lord of Mulesford" and which were blazoned for the same bearer in the Caerlaverock Poem or Roll of Arms of 1300, when he was present at the Siege of Caerlaverock Castle. From him are descended the Carew baronets of Antony and of Haccombe

Carew was the son and heir of Sir Alexander Carew, 2nd Baronet (1608–1644) by his wife Jane Rolle (d.1679) daughter of Robert Rolle (d.1633)[2] of Heanton Satchville, Petrockstowe, Devon. His father was beheaded on Tower Hill on 23 December 1644 for attempting to betray the Parliamentary cause during the English Civil War.[3]

Carew succeeded to the baronetcy in 1644 and although the estates were initially sequestered they were later released and he was allowed to inherit in November 1645.