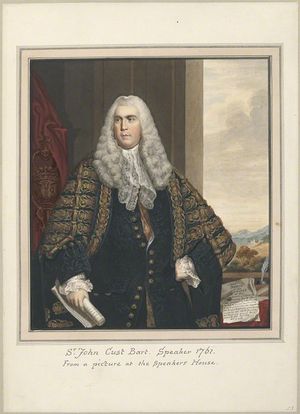 Cust was the son of Sir Richard Cust, 2nd Baronet, and Anne Brownlow, daughter of Sir William Brownlow, 4th Baronet. He was educated at Eton and Corpus Christi College, Cambridge.[1] Cust was elected to the House of Commons for Grantham in 1743, seat he would continue to represent until his death 27 years later. In 1761 he was appointed Speaker of the House of Commons, which he remained until shortly before his death in 1770. He was admitted to the Privy Council in 1762.

Cust married Etheldred Payne, daughter of Thomas Payne, in 1743. He died in January 1770, aged 51, and was succeeded in his title by his son Brownlow Cust, who in 1776 was raised to the peerage as Baron Brownlow in recognition of his father's services.