Sir Jonathan Trelawny, 3rd Baronet (24 March 1650 – 19 July 1721) was a British Bishop of Bristol, Bishop of Exeter and Bishop of Winchester. Trelawny is best known for his role in the events leading up to the Glorious Revolution which are referenced in the Cornish anthem The Song of the Western Men.

He was born at Trelawne in the parish of Pelynt, Cornwall. He was educated at Westminster School and then went to Christ Church, Oxford at the start of the Michaelmas term of 1668 where he distinguished himself as a scholar. A staunch royalist, he was ordained in 1673 and became a beneficed clergyman. He was appointed rector of South Hill on 4 October and of St. Ives on 12 December 1677, becoming Bishop of Bristol in 1685. He was one of the Seven Bishops tried under James II.

Trelawny and the other bishops petitioned against James II's Declaration of Indulgence in 1687 and 1688, (granting religious tolerance to Catholics) and as a result he was arrested and imprisoned in the Tower of London on charges of seditious libel. The bishops said that whilst they were loyal to King James II, their consciences would not agree to allowing freedom of worship to Catholics even if it were to be within the privacy of their own homes as the Declaration proposed; thus they could not sign. Trelawny was held for three weeks before trial, then tried and acquitted; this led to great celebrations, with bells being rung in his home parish of Pelynt.[1]

Trelawny was rewarded in 1689 by being appointed Bishop of Exeter (whilst still, until 1694, Archdeacon of Totnes) after the military defeat of James II and the accession of the Protestant William of Orange to the British throne. He was further rewarded by being appointed Bishop of Winchester in 1707, although his promotion was a matter of some controversy, as Queen Anne, who was determined to keep all important Church appointments within her own gift, overruled the advice of her ministers in appointing him, thus provoking the so-called Bishoprics Crisis. He died in 1721, in Chelsea, Middlesex; his body was brought back for burial to Pelynt in Cornwall. 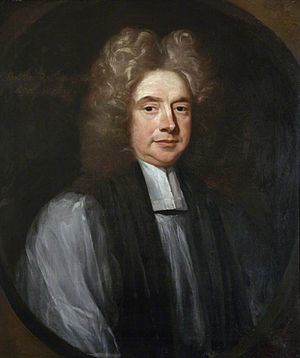 Jonathan Trelawny features in the lyrics of The Song of the Western Men.

Bishop Trelawny was immortalised in the Cornish Anthem, The Song of the Western Men, better known simply as Trelawny, written over a century later and composed by Parson Robert Stephen Hawker, vicar of Morwenstow.