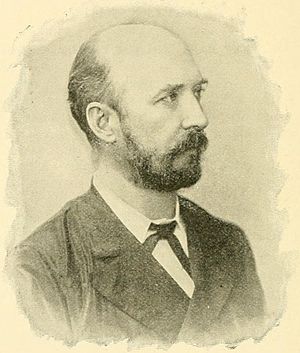 Robert Hart was born into a devout Methodist family in Dungannon Street, Portadown, County Armagh, Ulster, Ireland,[1] in 1835. His father, Henry Hart (1806–1875) worked in distilleries, and married a farmer’s daughter, Ann Edgar, in 1834. Robert Hart was educated at a Wesleyan school in Taunton, Somerset, then at Wesley Connexional School, Dublin, and at the age of 15 was sent to Queen’s University, Belfast, where he graduated in 1853. He would become, after his retirement, Pro-Chancellor of Queen’s University.[2][3]

In spring of the following year, his university nominated Robert Hart to the British Foreign Office as a student interpreter in the China consular service.[4] After arriving in Hong Kong, he was sent in September 1854 to the British vice-consulate in Ningpo as a supernumerary interpreter. When a dispute broke out between the British and Portuguese consuls, Robert Hart was given the responsibility of managing the consulate for several months. Hart’s calmness and good judgement in the face of conflict between the Chinese and Portuguese earned him favourable recommendations from his superiors and led to his nomination, in March 1858, as secretary to the Allied Commissioners governing Canton.[4] Hart first served under Sir Harry Parkes, then, in October 1858, was promoted to the British Consulate as interpreter under the orders of Sir Rutherford Alcock. In 1859 the Chinese authorities in Canton requested that Hart establish a customs administration there, similar to the one already set up in Shanghai under Horatio Nelson Lay. The British accepted Hart's resignation and transfer to the Chinese service in the belief, fully justified, that this would improve conditions for fair trade. When Lay went on leave (not properly authorised) in March 1861, he appointed Hart and Fitzroy jointly as his deputies in Shanghai.[5][6]

The good relations Hart established with the imperial authorities in Peking while deputising for Lay led them to dismiss the difficult and haughty Lay upon his return from leave. Hart was appointed in his place in November 1863, with British approval. As Inspector-General of China's Imperial Maritime Custom Service (IMCS), Hart's main responsibilities included collecting custom duties for the Chinese government, as well as expanding the new system to more sea and river ports and some inland frontiers, standardising its operations, and insisting on high standards of efficiency and honesty.[7] The top echelon of the service was recruited from all the nations trading with China. Hart's advice led to the improvement of China's port and navigation facilities.

From the start, Hart was anxious to use such influence as he possessed in favour of other modernising steps. A modern postal service and the supervision of internal taxes on trade were eventually added to the Service's responsibilities. Hart worked to persuade China to establish its own embassies in foreign countries, and with the Manchu noble Prince Gong, established the Tongwen Guan (School of Combined Learning) in Peking in 1862, with a branch in Canton, to enable educated Chinese to learn foreign languages, culture and science, for China's future diplomatic and other needs. (An early appointment to the school was the completely unsuitable 'Baron von Gumpach' (an assumed name) whose discharge led him to sue Hart in the British Supreme Court for China and Japan for defamation. In 1873, the case ultimately went to the Judicial Committee of the Privy Council Hart v Gumpach which upheld Hart's right to make the decision.[8]) In 1902 the Tongwen Guan was absorbed into the Imperial University, now Beijing University.

Hart was known for his diplomatic skills, and befriended many Chinese and Western officials. This aided him in directing customs operations without interruption even during periods of turmoil. His American Commissioner, Edward Drew, credited him with preventing a war with Britain in 1876, and he and his London representative, James Campbell, helped bring about peace after a French attack on the Chinese navy in Fuzhou in 1884. In 1885, Hart had also been asked to become Minister Plenipotentiary at Peking, upon the retirement of Sir Thomas Wade. He declined the honor after four months of hesitation, on the grounds that his work in the Customs Service was of certain benefit to both China and Britain, but that the outcome of a change of post was unclear.[9]

During Hart's tenure in the Maritime Customs, Prince Gong was head of the Zongli Yamen, the newly established Chinese equivalent of the British Foreign Office, and the two men held each other in high regard. Hart was so well known in the Zongli Yamen that he was affectionately nicknamed "our Hart" (wǒmen de Hèdé, 我們的赫德). He also often worked closely with the powerful Viceroy, Li Hongzhang and their final work together involved negotiating a settlement China could tolerate at the end of the Boxer Rebellion, when the Eight-Nation Alliance of Western forces took control of Peking to lift the Siege of the International Legations, after the Dowager Empress and her nephew the Guangxu Emperor had fled the city.

Hart held his post till his retirement in 1910, although he left China on leave in April 1908, and was succeeded temporarily by his brother-in-law, Sir Robert Bredon, and then formally by Sir Francis Aglen.[4] Hart died on 20 September 1911 after a cardiac decline following a bout of pneumonia. He was buried on 25 September 1911 at Bisham, Berkshire, England.[10]

Hart's skills as Inspector-General were recognized by both Chinese and Western authorities, and he was awarded several honorific Chinese titles, including the Red Button, or button of the highest rank; a Peacock's Feather; the Order of the Double Dragon; the Ancestral Rank of the First Class of the First Order for Three Generations; and the title of Junior Guardian of the Heir Apparent in December 1901.[11] He was also appointed a CMG, KCMG, and GCMG, and received a British baronetcy. In 1900 he was awarded the Prussian Order of the Crown (First Class), and received this in person the following year from the German Minister in China.[12] In 1906 he was awarded a Grand Cross of the Order of the Dannebrog by the King of Denmark.[13]

In 1935 the 'Sir Robert Hart Memorial Primary School' in Portadown, Northern Ireland, was established in his name.[15]

Hart’s devotion to his work played havoc with his emotional life. As a young man, in spite of his Methodist conscience, he had bouts of promiscuity. In 1857 he took a Chinese concubine, Ayao, with whom he had three children and for whom he developed genuine affection and respect. After becoming Inspector-General in 1863, he proposed to marry her, knowing that his family and friends in Ireland might not accept her because she was Chinese and a non-Christian, but she died from loss of blood after giving birth to their third child in 1865. Heart broken, Hart knew the only way to avoid an arranged marriage with a Chinese royal was to find a respectable wife in Ireland during his first leave in 1866. As Ayao's dying wish, Hart brought their three children out of China, provided for them (Anna, Herbert and Arthur Hart), and found them a foster home in London. He then quickly courted and married Hester Bredon of Portadown, daughter of his aunt’s doctor [16] They too had three children, Evelyn, Robert and Mabel, but Hart did not see much of them, as Hester returned to Britain in 1876, and after a brief reunion in 1878–82, she and the children lived in London. Hart took an interest in the progress of his illegitimate children, but made no direct contact with them. In his last decade, he was obliged to acknowledge them by legal declarations.[17] He was disappointed in the adult lives of his three legitimate children, yet acknowledged that he had been a neglectful father. After 1882 he lived a celibate life, but had deep friendships with many girls and women, amongst whom were three generations of the Carrall family. Many of his male staff felt he was a supportive friend as well as a demanding superior.[18] He got to know all his promising young men while they were students learning Chinese under his eyes in Peking, for he insisted that the ability to speak and write Mandarin Chinese was essential for promotion to Commissioner in charge of a Chinese port.[19]