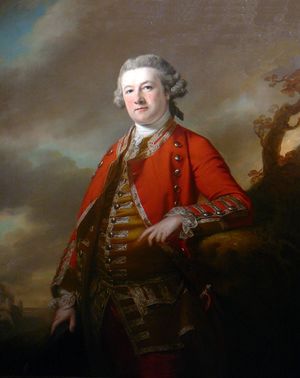 Robert Pigot was born in London, England in 1720. His two brothers were George Pigot, 1st Baron Pigot, Governor of Madras, India and Admiral Hugh Pigot, Commander-in-Chief of the West Indies fleet. He and his brothers shared Huguenot ancestry through their grandfather Peter Godde, who had come to England in the late seventeenth century.[1]

He also served as a Member of Parliament for Wallingford from 1768 to 1772. He was appointed Warden of the Mint from August, 1771 until his death.[2]

On 17 June 1775 he commanded the left flank of the British assault in the Battle of Bunker Hill. On 9 July he was Colonel in the 55th Regiment of Foot. He was promoted to the permanent grade of Colonel for his bravery in the battle of Bunker Hill. He was made a Major General in 1777. Pigot was placed in command in Rhode Island and made a Lieutenant General in 1782. In the Battle of Rhode Island he fought with 3,000 men against 5,000 men under General John Sullivan. He inherited the baronetcy of his older brother Lord George Pigot (it had been created with special remainder) and the Patshull Hall estate in 1777. He was also left, with his brother Hugh and his sister Margaret (Fisher), the Pigot Diamond which was sold by Act of Parliament in a lottery. On 8 February he resigned and died 1 August 1796 in Stafford, England.