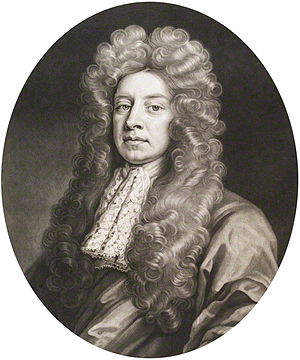 Sir Robert Southwell PRS (31 December 1635–1702) was an English diplomat. He was Secretary of State for Ireland and President of the Royal Society from 1690.

Robert Southwell was born near Kinsale in County Cork on 31 December 1635 to Robert Southwell (1608-1677) and his wife Helena, daughter of Major Robert Gore, of Shereton, Wiltshire. The family had settled in Ireland a couple of generations earlier, and his father had become a customs official at Kinsale in 1631. Like other Munster planters, he was threatened by the Irish Rebellion of 1641. During the Civil War, he followed the Royalist cause, placing him in a weak position. This may be why his son was sent to Christchurch, Hampshire in 1650, before graduating to Queen's College, Oxford, from which he graduated BA in 1655. Between 1659 and 1661, he travelled in Europe meeting some of the leading intellectuals of his time. He was elected a Fellow of the Royal Society in 1662.

On his return to Ireland, his father wanted him to find employment that would keep him in Ireland. He obtained the post of secretary to the Commission of Prizes in 1664. Soon after, he married Elizabeth Dering (1649–1682), daughter of Sir Edward Dering, 2nd Baronet, by whom his son Edward Southwell was born. Her marriage portion of £1500 enabled him to buy one of the four clerkships of the Privy Council.

His linguistic abilities suited him for diplomatic service. He was appointed in November 1665 as an emissary to Portugal, being knighted before he left. There he assisted in securing the peace between Spain and Portugal, which was achieved in February 1668. He returned to England, but was sent back to Portugal, staying for over another year.

In October 1671, he was dispatched to Brussels as ambassador. On his return, he was elected to the English Parliament for Penryn in 1673. He also took up again the post of secretary to the Commission of Prizes, which he had resigned in 1667 and became his father's deputy as Vice-admiral of Munster. He also became a Commissioner of Excise in 1671.

Southwell was embarrassed by the Popish Plot, being forced to testify at the trial of Coleman that Titus Oates, whom he detested, was telling the truth about the evidence had given at a crucial Council meeting, and sold his clerkship of the Privy Council in 1679. However, he remained in favour, being appointed in spring 1680 as an envoy to the Elector of Brandenburg, with the object of constructing an alliance against France. This took him to the courts of the Prince of Orange and the Duke of Brunswick–Lüneburg, but the project was no longer what Charles II wanted.

In 1685, he was elected to Parliament again, this time for Lostwithiel. However, he was out of office in this period, having lost his Excise place in 1681.

After the Glorious Revolution

After the accession of William and Mary II of England, Southwell accompanied William to Ireland, as his principal secretary, after the deposed James II had landed at Kinsale in his attempt to recover his kingdom. He was in Ireland from June to October 1690. In December he was elected as President of the Royal Society, a post to which he was re-elected annually until 1695. He also held office as a Customs Commissioner from 1689 until 1697. He died at his estate King's Weston House near Bristol, on 11 September 1702 and was buried nearby in Henbury church in Gloucestershire. Without severing himself from his Irish roots (almshouses in Kinsale record his memory), he had moved to being an English gentleman with Irish estates.