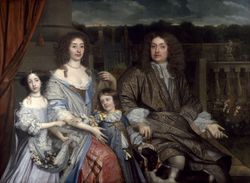 Sir Robert Viner and his family, as painted by John Michael Wright.

Soon Robert became a partner in his kinsman's business, and in 1666 an alderman of the City of London; in 1665 he was made a knight, and in the following year a baronet. He was sheriff during the year of the Great Fire of London, and was chosen Lord Mayor of the City of London in 1674. Combining like his uncle the business of a banker with that of a goldsmith, Viner, who produced the jewel-studded replica of the Crown of St. Edward and the King's Orb, used for Charles II's coronation in 1661,[1] was brought much into contact with Charles II and with the court. The king attended his mayoral banquet, and the Lord Mayor erected an equestrian statue in his honour on a spot now covered by Mansion House.

Sir Robert bought Swakeleys House in Ickenham, west of London (near its outer edge, which has one open day per year) from the wife of Sir James Harrington soon after Harrington had fled to France in 1660. Following the banquet attended by Charles II, Samuel Pepys visited the house twice to borrow money on behalf of the king. Pepys recorded in his diary how Sir Robert had shown him the body of a black boy who had worked as a servant, but had died of consumption. The body had been dried in an oven and kept in a box, which would be shown to visitors.[2] Vyners School, a secondary school in Ickenham is named after Sir Robert.[3] In 1659 he served as High Sheriff of Norfolk.

Having been appointed the king's goldsmith in 1661, Sir Robert was one of those who lent large sums of money for the expenses of the state and the extravagances of the court; over £400,000 was owing to him when the national exchequer suspended payment in the move called the Great Stop of the Exchequer 1672, and he was reduced to the necessity of compounding with his creditors. He obtained from the state an annuity of £25,000. Viner died in Windsor on 2 September 1688.