He entered the Royal Navy in 1776 at the start of the American Revolutionary War.[2] His first engagement was the First Battle of Ushant on 27 July 1778, and, soon afterwards transferred to the West Indies, he was present, under the command of his cousin, at all the actions which culminated in Admiral George Rodney's victory of 12 April 1782 in the Battle of the Saintes.

After the peace, like many other British naval officers, Hood spent some time in France, and on his return to England was given the command of a sloop, from which he proceeded in succession to various frigates. In the 32-gun fifth-rate frigate Juno his gallant rescue of some shipwrecked seamen won him a vote of thanks and a sword of honour from the Jamaica assembly.[2]

Early in 1793, after the outbreak of the French Revolutionary Wars, Hood went to the Mediterranean in Juno under his cousin Lord Hood, and distinguished himself by an audacious feat of coolness and seamanship in extricating his vessel from the harbour of Toulon, which he had entered in ignorance of Lord Hood's withdrawal. In 1795, in Aigle, he was put in command of a squadron for the protection of Levantine commerce, and in early 1797 he was given command of the 74-gun ship of the line Zealous, in which he was present at Admiral Horatio Nelson's unsuccessful attack on Santa Cruz de Tenerife. Captain Hood conducted the negotiations which relieved the squadron from the consequences of its failure.[2]

Zealous played an important part at the Battle of the Nile. Her first opponent was put out of action in twelve minutes. Hood immediately engaged other ships, the Guerriere being left powerless to fire a shot.

When Nelson left the coast of Egypt, Hood commanded the blockading force off Alexandria and Rosetta. Later he rejoined Nelson on the coast of the Kingdom of the Two Sicilies, receiving for his services the order of St Ferdinand.[2]

In the 74-gun third-rate Venerable Hood was present at the Battle of Algeciras on 8 July 1801 and the action in the Straits of Gibraltar that followed. In the Straits his ship suffered heavily, losing 130 officers and men. In 1802, Captain Hood was employed in Trinidad as a commissioner, and, upon the death of the flag officer commanding the Leeward Islands station, he succeeded him as Commodore. Island after island fell to him, and soon, outside Martinique, the French had scarcely a foothold in the West Indies. Amongst other measures Hood took one may mention the garrisoning of Diamond Rock, which he commissioned as a sloop-of-war to blockade the approaches of Martinique. For these successes he was, amongst other rewards, appointed a Knight Companion of the Order of the Bath (KB).[2] 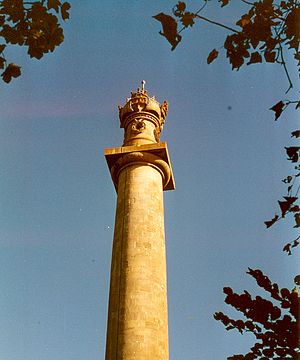 In command next of the squadron blockading Rochefort, Sir Samuel Hood lost an arm during the Action of 25 September 1806 against a French frigate squadron. Promoted to Rear Admiral a few days after this action, Hood was in 1807 entrusted with the operations against Madeira, which he brought to a successful conclusion.[2]

In 1808 Hood sailed to the Baltic Sea, with his flag in the 74-gun Centaur, to take part in the Russo-Swedish war. In one of the actions of this war Centaur and Implacable, unsupported by the Swedish ships (which lay to leeward), cut out the Russian 50-gun ship Sevolod from the enemy's line and, after a desperate fight, forced her to strike. King Gustav IV Adolf of Sweden rewarded Admiral Hood with the Grand Cross of the Order of the Sword.[2]

Present in the roads of A Coruña at the re-embarkation of the army of Sir John Moore after the Battle of A Coruña, Hood thence returned to the Mediterranean, where for two years he commanded a division of the British fleet. In 1811 he became Vice Admiral.[2]

In his last command, that of the East Indies Station, he carried out many salutary reforms, especially in matters of discipline and victualling.[2] He died without issue at Madras in 1814, having married Mary Elizabeth Frederica Mackenzie, eldest daughter and heiress of Francis Mackenzie, 1st Baron Seaforth.

A lofty column, the Admiral Hood Monument was raised to his memory on a hill near Butleigh, Somersetshire. There is another memorial in Butleigh Church with an inscription written by Robert Southey. The Hoods Tower Museum in Trincomalee gains it name form the fire control tower named after him at Fort Ostenburg.