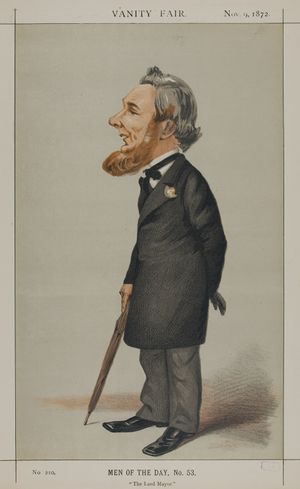 "The Lord Mayor". Caricature by Cecioni published in Vanity Fair in 1872.

Sir Sydney Hedley Waterlow, 1st Baronet, KCVO (1 November 1822 – 3 August 1906) was an English philanthropist and politician, principally remembered for donating Waterlow Park to the public as "a garden for the gardenless".

He was born in Finsbury and brought up in Mile End. Educated at St Saviour's Grammar School, he was apprenticed to a stationer and printer and worked in the family firm of Waterlow & Sons Ltd, a large printing company employing over two thousand people. From that he moved into finance and became a director of the Union Bank of London.

He started his political career as a Councillor in 1857 (when he introduced telegraph links between police stations). In 1863 he became an Alderman and began his philanthropic works. He was chairman of the philanthropic housing company The Improved Industrial Dwellings Company, which built the Leopold Buildings amongst others. He also worked for many other charities. He was a Sheriff of the City of London in 1866 and Lord Mayor of London from 1872–1873. Having been knighted in 1867[1] Waterlow was created a Baronet of Fairseat in the parish of Wrotham in the County of Kent and of Highgate in the County of Middlesex on 4 August 1873.[2]

In 1870, he bought large areas of land in Kent, including the village of Fairseat (near Stansted), a major portion of Stansted as well as other pieces of land extending from Wrotham to Meopham. The parts of the estate were linked by a small bridge bearing the family crest over Trottiscliffe Road (which is still in evidence today - see www.geograph.org.uk). In 1887, he built Trosley Towers on the crest of the escarpment on the North Downs, to the east of Trottiscliffe Road. Two drives approached the house, and it was surrounded by wooded grounds. Later, other private drives were constructed, including Hamilton Drive which still survives within the Trosley Country Park and runs from the site of the old House to Commority Road.[3]

In 1872 he gave Lauderdale House (now in Waterlow Park) to St Bartholomew's Hospital to be used as a convalescent home for the poor, staffed by nurses supplied by Florence Nightingale, and in 1889 he gave the surrounding park to the London County Council. His former house next to the park, Fairseat, became Channing Junior School.

He was a Liberal Member of Parliament for Dumfriesshire from 1868–1869, when he was unseated on the grounds that he was a government contractor,[4] his firm having taken a contract without his knowledge. He then sat for Maidstone (1874–1880) and Gravesend (1880–1885).

Sir Sydney was appointed a Knight Commander of the Royal Victorian Order (KCVO) in 1902.[5]

His fourth son, David Sydney Waterlow, was Liberal MP for Islington North. The artist Ernest Albert Waterlow was his nephew.

When Sir Sidney died in 1906 at his Trosley Towers estate, Wrotham, which passed to his son Philip (who thereby became entitled Sir). When Sir Philip died in 1931, the estate was sold off. Some of the houses (of the estate) were bought by tenants, one of these was Pilgrims House, (see http://www.geograph.org.uk/photo/1177043) with six acres of land, at the bottom of Trottiscliffe Road which went for £600. Trosley Towers and the woodlands around it, were sold to 'Mr E. E. Shahmoon' in 1935. In 1936, Mr Shahmoon had Trosley Towers demolished and had Hamilton Lodge built along with adjoining stables. One story suggests that the Lodge and stables were built to accommodate the Shah of Persia's racehorses on his visits to England.

The whole area was still owned by Mr Shahmoon when it was taken over by the army in 1942 during World War II and Hamilton Lodge was to be the HQ of the Army Brigade that was stationed here.[3] Later the Trosley Towers Estate passed to Kent County Council, which created Trosley Country Park.