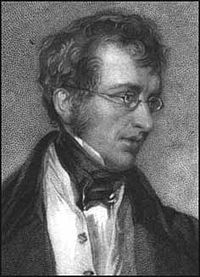 Buxton was born at Castle Hedingham, Essex. His father was also named Thomas Fowell Buxton. His mother's maiden name was Anna Hanbury. Through the influence of his mother, who was a Quaker, Buxton became associated with the Gurney family of Earlham Hall, Norwich. He was especially close to Joseph John Gurney, his sister the prison reformer Elizabeth Fry, and their sister Hannah, whom he married in May 1807. He lived at Northrepps Hall in Norfolk.[citation needed]

In 1808, Buxton's Hanbury family connections led to an appointment to work at the brewery of Truman, Hanbury & Company, in Brick Lane, Spitalfields, London. In 1811 he was made a partner in the business, renamed Truman, Hanbury, Buxton & Co. Later he became sole owner.

Although he was a member of the Church of England, Buxton attended meetings of the Religious Society of Friends (Quakers) with some of the Gurneys. In this way he became involved in the social reform movement, in which Friends were prominent. He helped raise money for the weavers of London, who were being forced into poverty by the factory system. He provided financial support for Elizabeth Fry's prison reform work and joined her Association for the Improvement of the Female Prisoners in Newgate.

Buxton was elected to Parliament for Weymouth and Melcombe Regis in 1818. As an MP he worked for changes in prison conditions and criminal law and for the abolition of slavery, in which he was helped by his sister-in-law Louisa Gurney Hoare.[3] He also opposed capital punishment and pushed for its abolition. Although he never accomplished this last goal during his lifetime, he worked to restrict those crimes for which capital punishment was sentenced; the number of crimes punishable by death was reduced from more than 200 to eight.

Thomas and Hannah Buxton had eight children. Four of them died of whooping cough over a five-week period around April 1820. Another one died of tuberculosis (consumption) some time later. 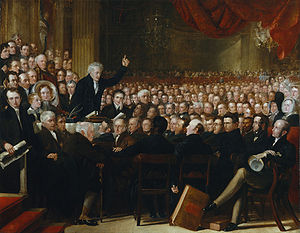 Buxton is on the left edge in this painting which is of the 1840 World Anti-Slavery Convention.[4] Move your cursor to identify him or click icon to enlarge

The slave trade had been abolished in 1808, but Buxton began to work for the abolition of the institution of slavery. In 1823 he helped found the Society for the Mitigation and Gradual Abolition of Slavery (later known as the Anti-Slavery Society). In the House of Commons in May 1823, Buxton introduced a resolution condemning the state of slavery as "repugnant to the principles of the British constitution and of the Christian religion", and called for its gradual abolition "throughout the British colonies". He also pressured the government to send dispatches to the colonies to improve the treatment of slaves.[5] Buxton took over as leader of the abolition movement in the British House of Commons after William Wilberforce retired in 1825.

He achieved his goal in 1833, when slavery was officially abolished in the British Empire, except in India, where it was part of the indigenous culture. Buxton held his seat in Parliament until 1837.

In 1839 Buxton urged the British government to make treaties with African leaders to abolish the slave trade. The government in turn backed the Niger expedition of 1841 (not including Buxton) put together by missionary organizations, which was also going to work on trade. More than 150 people were part of the expedition, which reached the Niger Delta and began negotiations. The British suffered such high mortality from fevers, with more than 25% of the group dying rapidly, that they cut short the mission in 1841.

David Livingstone was strongly influenced by Buxton's arguments that the African slave trade might be destroyed through the influence of "legitimate trade" (in goods) and the spread of Christianity. He became a missionary in Africa and fought the slave trade all his life.

In 1840 Buxton was created a baronet. His health failed gradually – according to some, due to disappointment over the failed mission to Africa. He died five years later.

On 16 June 1824 a meeting was held at Old Slaughter's Coffee House, St. Martin's Lane, London that created the Society for the Prevention of Cruelty to Animals. (It became the RSPCA when Queen Victoria gave royal assent in 1840.)[6] The 22 founding members included William Wilberforce, Richard Martin, Sir James Mackintosh, Basil Montagu, and Rev. Arthur Broome. Buxton was appointed chairman for the year 1824.[7]

Buxton had a number of notable descendants (5 sons and 6 daughters):[9]