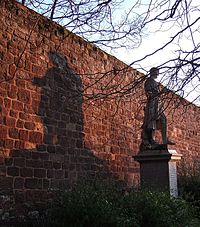 Born in London, he was the eldest son of Sir Thomas Dyke Acland, 9th Baronet and his wife Henrietta Anne Hoare, daughter of Sir Richard Hoare, 1st Baronet.[1] The Aclands were an old Devon family and successive generations of the family sat in the House of Commons for the county. His family had extensive properties on what is now the Holnicote Estate and particularly the village of Selworthy. In 1794, he succeeded his father as baronet. Acland was educated at Harrow School and Christ Church, Oxford and graduated with a Bachelor of Arts in 1808, and a Master of Arts in 1814.[1] He gained a Doctor of Civil Laws degree in 1831.[1]

Among his many business interests Acland was the owner of a schooner called Lady of St Kilda, which he bought in 1834. In 1842 the schooner visited the township of Melbourne in Australia, which had been founded in 1835. As a result of that visit, the suburb of St Kilda was named after the ship, and Acland St, one of St Kilda's main commercial centres, was named after Acland.

In 1808, he married Lydia Hoare,[2] daughter of Henry Hoare.[1] A new baronetcy was created for his fourth son, Sir Henry Acland, 1st Baronet.