From Infogalactic: the planetary knowledge core
Jump to: navigation, search
This article is about the general and colonial governor. For the solicitor and clerk to Lanarkshire County Council, see Thomas Munro (solicitor). For the American philosopher of art, see Thomas Munro (art historian).

Major-general Sir Thomas Munro, 1st Baronet KCB (27 May 1761 – 6 July 1827) was a Scottish soldier and colonial administrator. He was an East India Company Army officer and statesman.

Munro was born in Glasgow on 27 May 1761 to a merchant called Alexander Munro. Thomas' grandfather was a tailor, who prospered by successful investments in American tobacco. After working as a bank clerk, Alexander Munro joined the family's prosperous tobacco business, but was ruined by the collapse of the tobacco trade during the American Revolutionary War.[2] Thomas was also a direct descendant of George Munro, 10th Baron of Foulis (d.1452), chief of the Highland Clan Munro.[3]

Thomas was educated at the University of Glasgow. While at school, Thomas was distinguished for a singular openness of temper, a mild and generous disposition, with great personal courage and presence of mind. Being naturally of a robust frame of body, he surpassed all his school-fellows in athletic exercises, and was particularly eminent as a boxer. He was at first intended to enter his father's business, but in 1779 was appointed to an infantry cadetship in Madras.[4]

He served with his regiment during the hard-fought war against Haidar Ali (1780–1783), serving under his older and distant relation Major Sir Hector Munro, 8th of Novar.[5] Thomas also later served alongside a younger distant relation John Munro, 9th of Teaninich.[6] Thomas served again with his regiment in the first campaign against Tipu Sultan (1790–1792). He was then chosen as one of four military officers to administer the Baramahal, part of the territory acquired from Tipu, where he remained for seven years learning the principles of revenue survey and assessment which he afterwards applied throughout the presidency of Madras.[7]

After the final downfall of Tipu in 1799, he spent a short time restoring order in Kanara; and then for another seven years (1800–1807) he was placed in charge of the northern districts ceded by the Nizam of Hyderabad, where he introduced the ryotwari system of land revenue.[7]

After a long furlough in Britain, during which he gave valuable evidence upon matters connected with the renewal of the British East India Company's charter, he returned to Madras in 1814 with special instructions to reform the judicial and police systems.[7]

On the outbreak of the Pindari War in 1817, he was appointed as brigadier-general to command the reserve division formed to reduce the southern territories of the Peshwa. Of his services on this occasion Lord Canning said in the House of Commons:

He went into the field with not more than five or six hundred men, of whom a very small proportion were Europeans .... Nine forts were surrendered to him or taken by assault on his way; and at the end of a silent and scarcely observed progress he emerged... leaving everything secure and tranquil behind him.[7]

In 1819 Munro was appointed a Knight Commander of the Order of the Bath (KCB).[8] 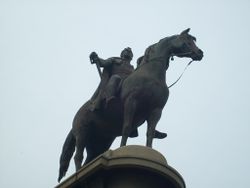 Equestrian statue of Thomas Munro in The Island, Chennai 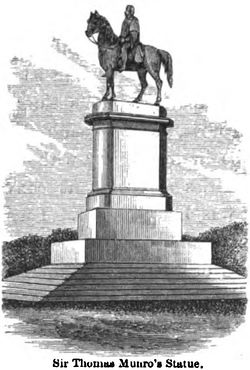 In 1820, he was appointed governor of Madras, where he founded systems of revenue assessment and general administration which substantially persisted into the twentieth century. He is regarded as the father of the 'Ryotwari system'. His official minutes, published by Sir A. Arbuthnot, form a manual of experience and advice for the modern civilian. Munro was created a Baronet, of Lindertis in the County of Forfar, in 1825.[10] He died of cholera on 6 July 1827 while on tour in the ceded districts, where his name is preserved by more than one memorial. An equestrian statue of him, by Francis Legatt Chantrey, stands in Madras city.[7]At his behest a Committee of public instruction was formed in 1826, which eventually led to the formation of Presidency College.[11]

Mantralaya village in Andhra Pradesh is a place where the `Brindavan' of famous 'Dvaita' saint 'Raghavendra Swami' is located. When Sir Thomas Munro was the Collector of Bellary in 1800, the Madras Government ordered him to procure the entire income from the Math and Manthralaya village.[citation needed] When the Revenue officials were unable to comply with this order, Sir Thomas Munro visited the Math for investigation. He removed his hat and shoes and entered the sacred precincts. Sri Raghavendraswamy emerged from the Vrindavan and conversed with him for some time, about the resumption of endowment. The Saint was visible and audible only to Munro, who received Manthraksha (god's blessing). The Collector went back and wrote an order in favour of the Math and the village. This notification was published in the Madras Government Gazette in Chapter XI, page 213, with the caption "Manchali Adoni Taluka". This order is still preserved in Fort St. George and Mantralayam.[12][13]