Sir Watkin was the eldest son and heir of Sir William Williams, 2nd Baronet, of Llanforda near Oswestry; his mother, Jane Thelwall, was a descendant of the antiquary, Sir John Wynn of Gwydir, Caernarfonshire.[1] The name "Watkin Williams-Wynn" was common to several of the later baronets. There is a Welsh folk song named after the best-known of these.[2]

Educated at Jesus College, Oxford, Williams-Wynn succeeded to the baronetcy and his father's estates on the death of his father in 1740 and also inherited Wynnstay near Ruabon and the other estates of the Wynn baronets of Gwydir which had been left to his mother on the death of Sir John Wynn in 1719. A lifelong Tory, he was Member of Parliament for Denbighshire from 1716 until his death, but for a brief interlude from 1741–1742, and was prominent among the opponents of Sir Robert Walpole.[1] He was also elected for the borough of Beaumaris in 1727 but chose to sit for Denbighshire.

In the election of 1741, the Walpole administration targeted his Denbighshire seat. Although Wynn won the popular vote by 1352 votes to 933 the sheriff disallowed 594 of Wynn's votes and returned his rival. Walpole's first defeat in the ensuing parliament was in a dispute of this election, and after Walpole's resignation early in 1742 Wynn won the seat back and the sheriff was jailed.[3] In the meantime Williams-Wynn sat for Montgomeryshire, vacating the seat on his re-election to Denbighshire.[4]

The most notable single item of the college's silver collection is a massive silver gilt punch bowl that Wynn presented to it in 1732.[6] The bowl, which weighs more than 200 ounces (5.7 kg) and holds 10 imperial gallons (45 l), was most famously used at a dinner held in the Radcliffe Camera in 1814, to celebrate what was supposed to be the final defeat of Napoleon. Those present at the dinner included the Tsar, the King of Prussia, Blücher, Metternich, the Prince Regent, the Duke of York and the Duke of Wellington.[6][7] There is a college tradition that the bowl will be presented to anyone who can meet two challenges. The first is to put arms around the bowl at its widest point; the second is to drain the bowl of strong punch. The bowl measures 5 feet 2 inches (1.57 m) at its widest point, and so the first challenge has only been accomplished rarely; the second challenge has not been met.[8]

A portrait of Williams by Thomas Hudson was acquired by Jesus College in 1997; it is not on public display as it hangs in the Senior Common Room of the college. It shows him wearing a sky-blue waistcoat, the colour proclaiming his allegiance to the Tory Jacobite cause.[9] 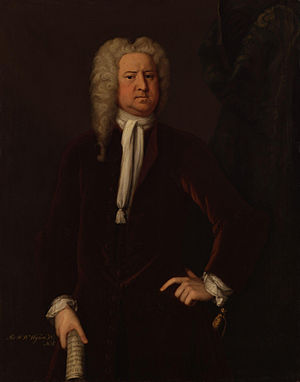 From the early 1720s Wynn headed one of the best known Jacobite clubs, the Cycle of the White Rose. His Jacobite leanings were never concealed — he even publicly burned a picture of George I in 1722. Wynn was increasingly regarded by the exiled Stuarts as a key figure in any potential restoration attempt, and in 1740 he promised assistance if the Pretender returned accompanied by a French army. Wynn always insisted on this condition being met, and sensibly refused to pledge support in writing. He engaged in negotiations with Stuart agents in 1740, 1742, and 1743, and went to consult with Louis XV at Versailles. This visit was repeated in October 1744, despite the fact that Britain and France were then at war. In 1745 the Young Pretender arrived without an army, and true to the letter of his promise Wynn provided no aid, travelling to London to attend parliament rather than remaining in Wales to organize support. He sent messages to Prince Charles Edward promising help when a French army arrived, but this did not happen and Wynn never publicly declared his involvement in the rebellion. After the defeat at Culloden, and in the absence of legal proof of Wynn's involvement, Pelham deemed his notoriety to be sufficient punishment.[3] 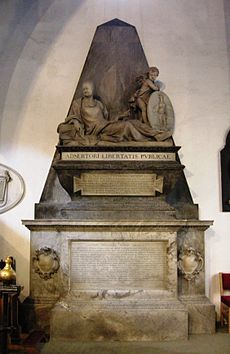 Monument to Sir Watkin Williams-Wynn at Ruabon, by Michael Rysbrack.

He commissioned the building of a new mansion at Wynnstay to replace the house built by William Eyton in 1616.

He was killed by a fall from his horse while out hunting and was buried at Ruabon. His widow, Dame Frances, commissioned a monument from the sculptor Michael Rysbrack: this was too large for existing chancel of the parish church, and a new south-east chapel was built to house it. The work was completed in 1755. Although there is still a Sir Watkin Williams-Wynn's Hunt based in Ruabon, the existing pack was re-founded in 1843.[10] At Sir Watkin's death the Wynnstay estates straddled at least five Welsh counties and extended into Shropshire in England, and yielded an estimated rental income of £20,000 — a very substantial sum at the time.

His first wife, Ann Vaughan (died 1748), was the heiress of extensive estates at Llwydiarth in Montgomeryshire, Glan-Llyn in Merionethshire and Llangedwyn in Denbighshire, of which the latter still belongs to the family. His son and heir, Sir Watkin Williams-Wynn, Bart. (1749–1789), was the eldest son of Sir Watkin's second marriage to Frances Shackerley (died 1803, in the lifetime of the 5th baronet). A noted patron of the Arts in Wales, he was the father of another Sir Watkin (1772–1842), the 5th baronet. Two other sons attained some measure of distinction: Charles (1775–1850), a prominent Tory politician, and Sir Henry (1783–1856), a diplomatist. A daughter, Frances Williams-Wynn (d. 1857), was the author of Diaries of a Lady of Quality,1797–1844, which were edited with notes by Abraham Hayward in 1864.[1]