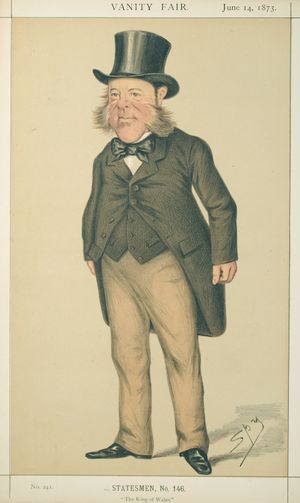 "The King of Wales"
Williams-Wynn as caricatured by Spy (Leslie Ward) in Vanity Fair, June 1873

Coat of arms of the 6th Baronet

Williams-Wynn was born in London, the eldest son of Sir Watkin Williams-Wynn, 5th Baronet and his wife Lady Henrietta Antonia Clive, eldest daughter of Edward Clive, 1st Earl of Powis.[1] He was educated at Westminster School and Christ Church, Oxford. He was a cornet in the 1st Life Guards in 1839 and a lieutenant in 1842. He succeeded his father to the baronetcy on 6 January 1840. He was also at Magdalene College, Cambridge and graduated MA in 1842.[2]

Williams-Wynn was elected Member of Parliament (MP) for Denbighshire in 1841 and held the seat until his death in 1885, aged 64. The seat had previously been held by his father, grandfather and great-grandfather, all of whom were also named Watkin Williams-Wynn.[3]

Williams-Wynn was lieutenant colonel of the Montgomeryshire Yeomanry from 1844 to 1877 and of the Denbighshire Rifle Volunteers from 1862 to 1885. He was ADC to Queen Victoria in 1881. He hunted four days a week, having been appointed master of the hunt at 23.[2] He was a director of the Great Western Railway.[1]

After Wynnstay was almost totally destroyed by fire in 1858, Sir Watkin rebuilt it between 1859 and 1865 on the same site, with Benjamin Ferrey as his architect.