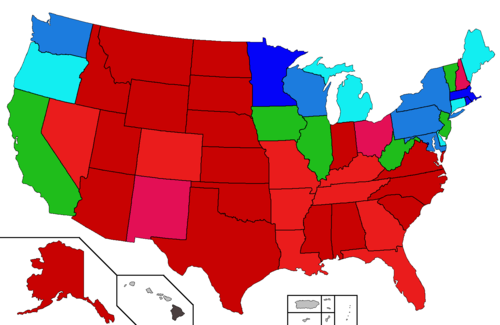 United States presidential election results between 1968 and 2012. Note that there is no universally-agreed definition regarding the start and end date of the sixth party system.

Although most in the field now believe we are in a sixth party system, there is a fair amount of disagreement about how exactly we arrived at this new system and about its particular contours. Scholars do, however, agree that there has been significant change in American electoral politics since the 1960s.[1]

The Sixth Party System is characterized by an electoral shift from the electoral coalitions of the Fifth Party System during the New Deal: the Republican Party became the dominant party in the South, rural areas, and suburbs; while the Democratic Party increasingly started to assemble a coalition of African-Americans, Hispanics and white urban Progressives. A critical factor was the major transformation of the political system in the Reagan Era or "Age of Reagan" of the 1980s and beyond led by Ronald Reagan.[2]

However, no clear disciplinary consensus has been forged on an electoral event responsible for shifting presidential and congressional control since the Great Depression, when the Fifth Party System emerged. Much of the work published on the subject has been by political scientists explaining the events of their time as either the imminent breakup of the Fifth Party System, and the installation of a new one or that this transition took place some time ago.[3] Other current writing on the Fifth Party System expresses admiration of its longevity: the first four systems lasted about 30 to 40 years each, which would have implied that the early twenty-first century should see a Seventh Party System.[4] It is also possible, as argued in (Jensen 1981) and elsewhere, that the party system has given way, not to a new party system, but to a period of dealignment in politics. Previous party systems ended with the dominant party losing two consecutive House elections by large margins, with a presidential election coinciding with or immediately following (in 1896) the second house election—decisive electoral evidence of political realignment. This took place in 2006–8 in favor of the Democrats, but the Republicans won the elections of 2010 by their biggest landslide since 1946 and finished the 2014 elections with their greatest number of U.S. House seats since 1928.[5]

Opinions differ on when the Sixth Party System began, varying from elections of 1966-68 or the 1980s when both parties began to become more unified and partisan, to the 1990s over cultural divisions.[6][7][8]

Craig argues for the 1972 elections, when Richard Nixon won a 49-state landslide. He notes that, "There seems to be consensus on the appropriate name for the sixth party system.... Changes that occurred during the 1960s were so great and so pervasive that they cry out to be called a critical-election period. The new system of candidate-centered parties is so distinct and so portentous that one can no longer deny its existence or its character."[9]

The Princeton Encyclopedia of American Political History dates the start in 1980, with the election of Reagan and a Republican Senate.[10]

With the Democratic party providing support for the 1960s Civil Rights movement, Richard Nixon devised the so-called "Southern Strategy", using opposition to it to win the 1968 elections for himself and other Republican candidates in the South, ending a century of Democratic dominance in the region. Nixon also won the 1972 re-elections in landslide.

Ronald Reagan produced a major realignment with his 1980 and 1984 landslide elections. The Democrats had control of Congress with two breaks since 1932. The Republican Party took control of the Senate in 1980 and both houses in 1994. It built a strong base in the white South, while losing the Northeastern base of the liberal and moderate Republicans.[11]

Reagan's economic policies (dubbed "Reaganomics") and the implementation of the Economic Recovery Tax Act of 1981 called for sharply reduced federal budgets, sharply reduced federal regulation of businesses, and sharp cuts in the federal income tax rates, the latter two of which were partially achieved. The top marginal income tax rate on high incomes was lowered from 70% to 28% over the course of seven years,[12] with regulations on cable communication, shipping, and savings and loan associations being reduced. The federal fuel tax and Federal Insurance Contributions Act tax were both increased, and the Tax Reform Act of 1986, while reducing income taxes on upper-income individuals, increased taxes on lower-income individuals, capital gains, and corporate income. Regulation of firearms was increased and a federal standard for regulations on Indian gaming was created. Annual federal spending increased from about $1.6 trillion in 1981 to about $2.1 trillion in 1988. Increased federal spending, coupled with major taxation legislation that reduced tax revenue, caused the federal government's public debt to increase from 31.9% of gross domestic product (GDP) in 1981 to 49.8% of GDP in 1988, with a tripling of the federal government's nominal debt during that time period. Following the early 1980s recession, economic growth and inflation maintained an average of about 4% per annum for the remainder of the decade, and the unemployment rate gradually decreased to nearly 5% by the end of the decade.

Some of the characteristics for this era displays are:

At the level of issues, the sixth party system was characterized by clashes over what rights to extend to various groups in society. The initial manifestations of these clashes were race-based school desegregation and affirmative action, but women's issues, especially abortion rights, soon gained equal billing....To these were added in the 1980s and in the 1990s gay rights."[13]

Democrats augmented their coalition with well educated voters, gays, and non-religious seculars. The Hispanic population grew very rapidly, reaching 15% of the population, but turnout was so low they were not a major factor in voting, except in California. Although George W. Bush made a special effort to reach Hispanics, their negative reaction to Republican enforcement-based approach on the issue of immigration strengthened the Democratic affiliations of those Hispanics who voted.

Rules of the game

New rule changes involved campaign financing, as very large sums were raised and candidates spent much of their energy focused on raising money behind the scenes. New campaign technologies involved the Internet, but television advertising continued to grow in importance, overshadowing the Internet as a campaign tool. Howard Dean in 2004 demonstrated that the Internet could be used to organize and finance a crusade, and this model was followed by most of the candidates for the 2008 election, with Barack Obama and Ron Paul the most successful.[16]