From Infogalactic: the planetary knowledge core
Jump to: navigation, search
This article is about early Norse poets. For other uses, see Scald. 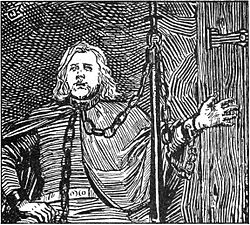 Bersi Skáldtorfuson composing poetry while in chains after being captured by King Óláfr Haraldsson (Christian Krohg's illustration from Heimskringla, 1899 edition)

The term skald (or skáld) meaning ‘poet’, is generally used for poets who composed at the courts of Scandinavian and Icelandic leaders during the Viking Age and Middle Ages. Skaldic poetry forms one of two main groupings of Old Norse poetry, the other being the anonymous Eddic poetry.

The most prevalent metre of skaldic poetry is dróttkvætt. The subject is usually historical and encomiastic, detailing the deeds of the skald's patron. There is no evidence that the skalds employed musical instruments, though some speculate they may have accompanied their verses with the harp or lyre.[1]

The technical demands of the skaldic form were equal to the complicated verse forms mastered by the Welsh bards and Gaelic (in both Scotland and Ireland) ollaves, and like those poets, much of skaldic verse consisted of panegyrics to kings and aristocrats, or memorials and testimonials to their battles.

The West Germanic counterpart of the skald is the scop. Not unlike the scop, which is related to Modern English scoff, the name skald is continued in English scold, reflecting the central position of mocking taunts in Germanic poetry. 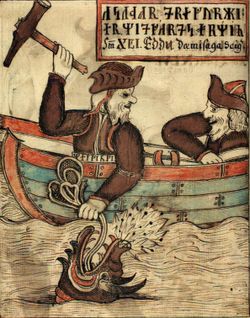 An early modern depiction of Thor’s fight with the World Serpent, the subject of early skaldic verses by Bragi Boddason and Ulfr Uggason.

Skaldic poetry can be traced to the earlier 9th century with Bragi Boddason and his Ragnarsdrápa, considered the oldest surviving Norse poem. Bragi is considered the oldest and original Skald. However, many Skalds came after him, like Egill Skallagrímsson and Thorbjorn hornklofi, who gained much fame in the 10th century for the poems composed for the kings they served and of their own exploits. At this time, the Icelanders and Nordic people were still pagan, and their work reflected that, having many references to gods like Thor and Odin, as well as to seers and runes.[2] The poetry from this time also can be noted for its portrayal of a "heroic age" for the Vikings, and "praise poetry, designed to commemorate kings and other prominent people, often in the form of quite long poems."[2]

As time went on, Skalds became the main source of Icelandic and Norse history and culture, as it was the Skalds who learned and shared the largely oral history.[3]

This led to a shift in the role of the Skald, allowing them to gain more prominent positions. Every king and chieftain needed a Skald to record their feats and ensure their legacy lived on, as well as becoming the main historians of their society. The written artifacts of that time come from Skalds, as they were the first from the time and place to record on paper. Some Skalds became clerical workers, recording laws and happenings of the government, some even being elected to the Thing and Althing, while others worked with churches to record the lives and miracles of Saints, along with passing on the ideals of Christianity. This last point is a very important point, as Skalds were the main agents of culture, when the Skalds began glorifying and passing on Christianity over the old pagan beliefs, the Viking culture shifted towards Christianity, as well.

As the years passed, the Skald profession was threatened with extinction, until Snorri Sturluson compiled the Prose Edda as a manual with the aim to preserve an appreciative understanding of their art.[4] Snorri, born in Iceland during the 12th century is the most famous Skald. In addition to being a great poet, he was leader of the Althing for part of his life, leading the government of Iceland. His Prose Edda did preserve and pass on the traditions and methods of the Skalds, adding a much needed stimulus to the profession, and providing much of the information which is known today about Skalds and how they worked. For example, the Prose Edda broke down and explained kennings used in Skaldic poetry, allowing many of them to be understood today. Beyond writing the Prose Edda, Snorri had many great poems, ranging from re-telling old Norse legends, to tales on exploits of kings, that gave him much fame, and which make his reputation live on beyond his death.[5]

Most Nordic verse of the Viking Age came in one of two forms: eddic or skaldic. Eddic verse was usually simple, in terms of content, style and metre, dealing largely with mythological or heroic content. Skaldic verse, conversely, was complex, and usually composed as a tribute or homage to a particular Jarl or king. There is debate over the performance of skaldic poetry, although there is a general scholalry consensus that it was spoken rather than sung.[6]

Unlike many other literary forms of the time, much skaldic poetry is attributable to an author (called a skald), and these attributions may be relied on with a reasonable degree of confidence. Many skalds were men of influence and power, and were thus biographically noted. The meter is ornate, usually dróttkvætt or a variation thereof. The syntax is complex, with sentences commonly interwoven, with kennings and heiti being used frequently and gratuitously.

Skaldic poetry was written in variants and dialects of Old Norse languages. Technically, their verse was usually a form of alliterative verse, and almost always using the dróttkvætt stanza (also known as the Court or Lordly Metre). Dróttkvætt is effectively an eight line form, where each pair of lines is an original single long line which is conventionally written as two lines.

Forms of skaldic poetry are:

The verses of the skalds contain a great profusion of kennings, the fixed metaphors found in most northern European poetry of the time. Kennings are devices ready to supply a standard image to form an alliterating half-line to fit the requirements of dróttkvætt; but the substantially greater technical demands of skaldic verse required that these devices be multiplied and compounded in order to meet its demands for skill and wordplay. These images can therefore become somewhat hermetic, at least to those who fail to grasp the allusions that lie at the root of many of them.

Most of the skaldic poetry we have are poems composed to individual kings by their court poets. They typically have historical content, relating battles and other deeds from the king's career.

To this could be added two poems relating the death of a king and his reception in Valhalla.

Some other were composed as circumstance pieces, such as those by Egill Skallagrímsson

More than 300 skalds are known from the period between AD 800 and 1200. Many are listed in the Skáldatal, not all of whom are known from extant material. Notable names include: