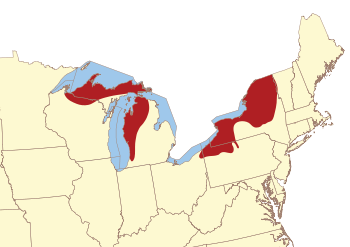 The eastern half of the maroon portions on this map is the approximate reach of ski country in New York and Pennsylvania.

Ski country is the hilly, snowy portions of the boundary between the Niagara Frontier and the Southern Tier of the western part of New York.

The area is a largely hilly terrain, mostly downwind from Lake Erie, Lake Ontario and the Finger Lakes, along the Eastern Continental Divide between the Great Lakes, the Mississippi River and Susquehanna River watersheds. The result of this is that through orographic lift, a significant amount of lake effect snow falls there during the months of November, December and January.

The portion of ski country in Western New York is defined by a geologic formation known as the Chautauqua Ridge.

As the name implies, the area is particularly popular with skiers, and there are several ski resorts that stretch from Pennsylvania into Central New York. The local ski resorts primarily offer alpine skiing while the numerous state parks use their hiking trails for cross-country skiing.