From Infogalactic: the planetary knowledge core
(Redirected from Skin lesion)
Jump to: navigation, search
For more information about nodules, see Nodule (medicine).
"Pustule" redirects here. It is not to be confused with Boil.
See also: List of cutaneous conditions

A cutaneous condition is any medical condition that affects the integumentary system — the organ system that encloses the body and includes skin, hair, nails, and related muscle and glands.[1] The major function of this system is as a barrier against the external environment.[2]

Conditions of the human integumentary system constitute a broad spectrum of diseases, also known as dermatoses, as well as many nonpathologic states (like, in certain circumstances, melanonychia and racquet nails).[3][4] While only a small number of skin diseases account for most visits to the physician, thousands of skin conditions have been described.[5] Classification of these conditions often presents many nosological challenges, since underlying etiologies and pathogenetics are often not known.[6][7] Therefore, most current textbooks present a classification based on location (for example, conditions of the mucous membrane), morphology (chronic blistering conditions), etiology (skin conditions resulting from physical factors), and so on.[8][9]

Clinically, the diagnosis of any particular skin condition is made by gathering pertinent information regarding the presenting skin lesion(s), including the location (such as arms, head, legs), symptoms (pruritus, pain), duration (acute or chronic), arrangement (solitary, generalized, annular, linear), morphology (macules, papules, vesicles), and color (red, blue, brown, black, white, yellow).[10] The diagnosis of many conditions often also requires a skin biopsy which yields histologic information[11][12] that can be correlated with the clinical presentation and any laboratory data.[13][14]

The skin weighs an average of 4 kg (8.8 lb), covers an area of 2 m2 (22 sq ft), and is made of three distinct layers: the epidermis, dermis, and subcutaneous tissue.[1] The two main types of human skin are glabrous skin, the nonhairy skin on the palms and soles (also referred to as the "palmoplantar" surfaces), and hair-bearing skin.[15] Within the latter type, hairs in structures called pilosebaceous units have a hair follicle, sebaceous gland, and associated arrector pili muscle.[16] In the embryo, the epidermis, hair, and glands are from the ectoderm, which is chemically influenced by the underlying mesoderm that forms the dermis and subcutaneous tissues.[17][18][19]

The epidermis is the most superficial layer of skin, a squamous epithelium with several strata: the stratum corneum, stratum lucidum, stratum granulosum, stratum spinosum, and stratum basale.[20] Nourishment is provided to these layers via diffusion from the dermis, since the epidermis is without direct blood supply.[21] The epidermis contains four cell types: keratinocytes, melanocytes, Langerhans cells, and Merkel cells. Of these, keratinocytes are the major component, constituting roughly 95% of the epidermis.[15] This stratified squamous epithelium is maintained by cell division within the stratum basale, in which differentiating cells slowly displace outwards through the stratum spinosum to the stratum corneum, where cells are continually shed from the surface.[15] In normal skin, the rate of production equals the rate of loss; about two weeks are needed for a cell to migrate from the basal cell layer to the top of the granular cell layer, and an additional two weeks to cross the stratum corneum.[22]

The dermis is the layer of skin between the epidermis and subcutaneous tissue, and comprises two sections, the papillary dermis and the reticular dermis.[23] The superficial papillary dermis interdigitates with the overlying rete ridges of the epidermis, between which the two layers interact through the basement membrane zone.[23] Structural components of the dermis are collagen, elastic fibers, and ground substance also called extra fibrillar matrix.[23] Within these components are the pilosebaceous units, arrector pili muscles, and the eccrine and apocrine glands.[20] The dermis contains two vascular networks that run parallel to the skin surface—one superficial and one deep plexus—which are connected by vertical communicating vessels.[20][24] The function of blood vessels within the dermis is fourfold: to supply nutrition, to regulate temperature, to modulate inflammation, and to participate in wound healing.[25][26]

The subcutaneous tissue is a layer of fat between the dermis and underlying fascia.[5] This tissue may be further divided into two components, the actual fatty layer, or panniculus adiposus, and a deeper vestigial layer of muscle, the panniculus carnosus.[15] The main cellular component of this tissue is the adipocyte, or fat cell.[5] The structure of this tissue is composed of septal (i.e. linear strands) and lobular compartments, which differ in microscopic appearance.[20] Functionally, the subcutaneous fat insulates the body, absorbs trauma, and serves as a reserve energy source.[5]

Diseases of the skin

Diseases of the skin include skin infections and skin neoplasms (including skin cancer).[27]

In 1572, Geronimo Mercuriali of Forlì, Italy, completed De morbis cutaneis (translated "On the diseases of the skin"). It is considered the first scientific work dedicated to dermatology.

The physical examination of the skin and its appendages, as well as the mucous membranes, forms the cornerstone of an accurate diagnosis of cutaneous conditions.[28] Most of these conditions present with cutaneous surface changes termed "lesions," which have more or less distinct characteristics.[29] Often proper examination will lead the physician to obtain appropriate historical information and/or laboratory tests that are able to confirm the diagnosis.[28] Upon examination, the important clinical observations are the (1) morphology, (2) configuration, and (3) distribution of the lesion(s).[28] With regard to morphology, the initial lesion that characterizes a condition is known as the "primary lesion," and identification of such a lesions is the most important aspect of the cutaneous examination.[29] Over time, these primary lesions may continue to develop or be modified by regression or trauma, producing "secondary lesions."[1] However, with that being stated, the lack of standardization of basic dermatologic terminology has been one of the principal barriers to successful communication among physicians in describing cutaneous findings.[20] Nevertheless, there are some commonly accepted terms used to describe the macroscopic morphology, configuration, and distribution of skin lesions, which are listed below.[29] 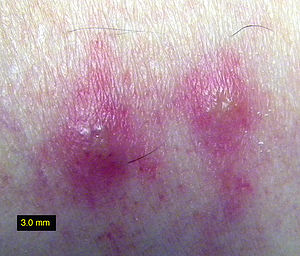 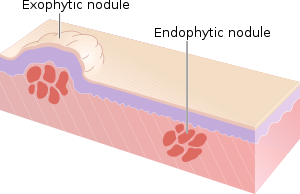 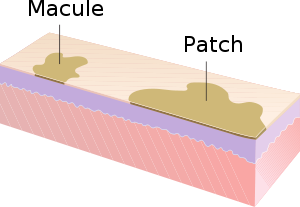 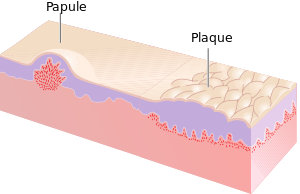 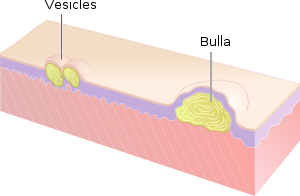 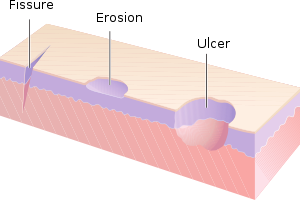 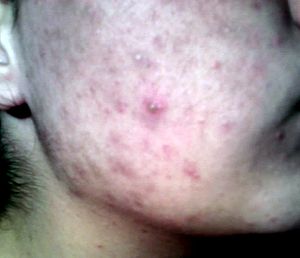 A pustule on the cheek

"Configuration" refers to how lesions are locally grouped ("organized"), which contrasts with how they are distributed (see next section).

"Distribution" refers to how lesions are localized. They may be confined to a single area (a patch) or may exist in several places. Some distributions correlate with the means by which a given area becomes affected. For example, contact dermatitis correlates with locations where allergen has elicited an allergic immune response. Varicella zoster virus is known to recur (after its initial presentation as chicken pox) as herpes zoster ("shingles"). Chicken pox appears nearly everywhere on the body, but herpes zoster tends to follow one or two dermatomes; for example, the eruptions may appear along the bra line, on either or both sides of the patient.