A Sea Captain (also called a Captain or a Ship's Captain or a Master or a Shipmaster) is a licensed mariner in ultimate command of the vessel.[1] The Captain is responsible for its safe and efficient operation, including: ship's seaworthiness, ship's safety and security conditions, cargo operations, navigation, crew management and ensuring that the vessel complies with local and international laws, as well as company and flag state policies. All persons on board, particularly during navigation, including, public authorities, state authorities, officers and crew, other shipboard staff members, passengers, guests and pilots, are under the captain's authority and are his ultimate responsibility.

A ship's captain commands and manages all ship's personnel, and is typically in charge of the ship's accounting, payrolls, and inventories. The captain is responsible for compliance with immigration and customs regulations, maintaining the ship's certificates and documentation, compliance with the vessel's security plan, as mandated by the International Maritime Organization. The captain is responsible for responding to and reporting in case of accidents and incidents, and in case of injuries and illness among the ship's crew and passengers.[citation needed]

The captain ensures that the ship complies with local and international laws and complies also with company policies.[1] The captain is ultimately responsible, under the law, for aspects of operation such as the safe navigation of the ship,[2] its cleanliness and seaworthiness,[3] safe handling of all cargo,[4] management of all personnel,[5] inventory of ship's cash and stores,[6] and maintaining the ship's certificates and documentation.[7]

One of a shipmaster's particularly important duties is to ensure compliance with the vessel's security plan, as required by the International Maritime Organization's ISPS Code.[8] The plan, customized to meet the needs of each individual ship, spells out duties including conducting searches and inspections,[9] maintaining restricted spaces,[9] and responding to threats from terrorists, hijackers, pirates, and stowaways.[10] The security plan also covers topics such as refugees and asylum seekers, smuggling, and saboteurs.[11]

On ships without a purser, the captain is in charge of the ship's accounting.[12] This includes ensuring an adequate amount of cash on board,[13] coordinating the ship's payroll (including draws and advances),[14] and managing the ship's slop chest.[15]

On international voyages, the captain is responsible for satisfying requirements of the local immigration and customs officials.[16] Immigration issues can include situations such as embarking and disembarking passengers,[17] handling crewmembers who desert the ship,[18] making crew-changes in port,[19] and making accommodations for foreign crewmembers.[20] Customs requirements can include the master providing a cargo declaration, a ship's stores declaration, a declaration of crewmembers' personal effects, crew lists and passenger lists.[21]

The captain has special responsibilities when the ship or its cargo are damaged, when the ship causes damage to other vessels or facilities, and in the case of injury or death of a crewmember or passenger. The master acts as a liaison to local investigators[22] and is responsible for providing complete and accurate logbooks, reports, statements and evidence to document an incident.[23] Specific examples of the ship causing external damage include collisions with other ships or with fixed objects, grounding the vessel, and dragging anchor.[24] Some common causes of cargo damage include heavy weather, water damage, pilferage, and damage caused during loading/unloading by the stevedores.[25] Finally, the master is responsible to address any medical issues affecting the passengers and crew by providing medical care as possible, cooperating with shore-side medical personnel, and, if necessary, evacuating those who need more assistance than can be provided on board the ship.[26]

There is a common belief that ship captains have historically been, and currently are, able to perform marriages. In most countries of ship's registry, this is a myth.[27]

The United States Navy defined a captain’s powers in its 1913 Code of Regulations, stating: "The commanding officer shall not perform a marriage ceremony on board his ship or aircraft. He shall not permit a marriage ceremony to be performed on board when the ship or aircraft is outside the territory of the United States" with the exceptions being "in accordance with local laws and the laws of the state, territory, or district in which the parties are domiciled" and "In the presence of a diplomatic or consular official of the United States, who has consented to issue the certificates and make the returns required by the consular regulations." There are a few contradictory legal precedents: courts didn’t recognize a shipboard marriage in California's 1898 Norman v. Norman but did in New York's 1929 Fisher v. Fisher (notwithstanding the absence of municipal laws so carried) and in 1933's Johnson v. Baker, an Oregon court ordered the payment of death benefits to a widow because she had established that her marriage at sea was lawful.

New Jersey's 1919 Bolmer v. Edsall said a shipboard marriage ceremony is governed by the laws of the nation where ownership of the vessel lies.

In the United Kingdom, no merchant ship has ever been approved for marriages, although from 1854 any which took place had to be reported in the ship's log.[28][29]

In other countries of ship's registry the legal situation varies. Most do not permit solemnisation of marriage by the master of a ship at sea. Filipino law, as a narrow exception, recognises a marriage in articulo mortis solemnized by the captain of a ship or chief of an aeroplane during a voyage, or by the commanding officer of a military unit.[30] Japan allows captains to perform a marriage ceremony at sea, but only for that country's citizens. Malta[31] or Bermuda-registered ships may offer weddings officiated by the captain at sea; Princess Cruises has used this as a selling point for their passenger ships since 1998[32] and Cunard announced its intention to move the registration of “Queen Mary 2″, “Queen Victoria” and “Queen Elizabeth” from Southampton to Bermuda in 2011.[33]

Some captains obtain other credentials (such as ordination as ministers of religion or accreditation as notaries public) which do allow them to officiate in jurisdictions where they otherwise would not be recognised.[27] Another option is a wedding on a ship in port, using an officiant from that port.

In fiction, ship captains have performed marriages in various media including the 1951 film The African Queen, and episodes of The Love Boat and various Star Trek series.[27] 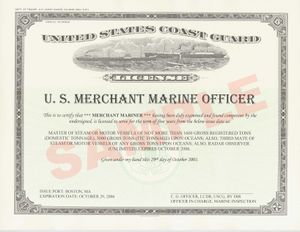 A ship's captain must have a number of qualifications, including a license.

There are two methods to attain an unlimited third mate's license in the United States: to attend a specialized training institution, or to accumulate "sea time" and take a series of training classes and examinations.[34]

Training institutions that can lead to a third mate's license include the U.S. Merchant Marine Academy (deck curriculum), and the 6 state maritime academies in Maine, Massachusetts, New York, Texas, or California or the Great Lakes Maritime Academy, or a three-year apprentice mate training program approved by the Commandant of the U.S. Coast Guard. Furthermore third mate's licenses can be obtained through the US Coast Guard Academy and the US Naval Academy with approved courses and requisite Sea Time as an Officer in Charge of a Navigational Watch.

A seaman may start the process of attaining a license after three years of service in the deck department on ocean steam or motor vessels, at least six months of which as able seaman, boatswain, or quartermaster. Then the seaman takes required training courses, and completes on-board assessments. Finally, the mariner can apply to the United States Coast Guard for a third mate's license.

A master of 1,600 ton vessels can, under certain circumstances, begin the application process for an unlimited third mate's license.[citation needed]

Some employers offer financial assistance to pay for the training for their employees. Otherwise, the mariner is responsible for the cost of the required training. A Chief Mate to Master formal training generally takes about 12 weeks and provides the knowledge, skills and other soft skills training to take on the duties and responsibilities.[35]

Various US states require and issue shipmaster or captain licenses in order to be employed in operating a vessel for hire, while navigating within "non-federal" waters. (Such as a lake or river charter boat "skipper"). Most states honor a USCG master's certificate as an alternative to their state licensing. These state licenses certify that the captain has given satisfactory evidence that he/she can safely be entrusted with the duties and responsibilities of operating or navigating passenger carrying vessels of the tonnage and upon the waters specified. The state licensed captains command vessels that range from small uninspected vessels to large excursion vessels that carry over 100 passengers, so the licenses are not issued haphazardly. For example see Washington State's Certification of Charter Boats and Operators licenses.

A captain's insignia that features the "executive curl."

Uniforms are still worn aboard many ships, or aboard any vessels of traditional and organized navigation companies, and are required by company regulation on passenger and cruise vessels.

In the passenger-carrying trade a unified corporate image is often desired and it is useful for those unfamiliar with the vessel to be able to identify members of the crew and their function. Some companies and some countries use an executive curl (also called Nelson loop) similar to that of the Royal Navy. Captain and officers on British ships often wear the traditional diamond shape within the stripes. This represents a blade of a ship's propeller. It should be worn in the correct direction with the overlapping loop facing forward.

In the United States, and in numerous other maritime countries, captains and officers of shipping companies may wear a merchant navy or merchant marine regular uniform when aboard ship.

In a few countries, as Italy and others, some captains with particular and requested experiences in terms of navigation and in terms of command at sea, depending by application of different countries' laws, will be named senior captain or "shipmaster senior grade".

The term master came from the Latin language used during the imperial Roman age, from the old Roman term magister navis, that is, the nobleman patrician designated as maximum authority on board the vessel. The magister navis had the right to use the laurus or corona laurèa and the corona navalis.

From this old Roman age tradition, the modern shipmaster of a few nations used to wear on the cap's vizor the golden laurel leaves.

A skipper is a person who has command of a boat or sea-craft or tug, more or less equivalent to "captain in charge aboard ship." At sea, or upon lakes and rivers, the skipper as shipmaster or captain has the absolute command over the crew. The skipper may or may not be the owner of the boat.

The word is derived from the Dutch word schipper; schip is Dutch for "ship". In Dutch sch- is pronounced [sx] and English-speakers rendered this as [sk].

The word "skipper" is used more than "captain" for some types of craft, for example fishing boats.

It is also more frequently used than captain with privately owned noncommercial or semi-commercial vessels, such as small yachts and other recreational boats, mostly in cases where the person in command of the boat may not be a licensed or professional captain, suggesting the term is less formal. In the U.S., a "skipper" who is in command of a charter vessel that carries paying passengers must be licensed by a state or the USCG. If the vessel carries over six paying passengers, it must be an "inspected vessel" and a higher class license must be obtained by the skipper/master depending on the vessel's gross tons.

In the Royal Navy, Royal Marines, U.S. Navy, U.S. Marine Corps, U.S. Coast Guard, and merchant naval slang, it is a term used in reference to the commanding officer of any ship, base, or other command regardless of rank. It is generally only applied to someone who has earned the speaker's respect, and only used with the permission of the commander/commanding officer in question.