From Infogalactic: the planetary knowledge core
Jump to: navigation, search
For other places with the same name, see Skipton (disambiguation).
This article is about the market town in England. For the town in Australia, see Skipton, Victoria.

Skipton (also known as Skipton-in-Craven) is a market town and civil parish in the Craven district of North Yorkshire, England. Historically in the West Riding of Yorkshire, it is on the River Aire and the Leeds and Liverpool Canal to the south of the Yorkshire Dales, 16 miles (26 km) northwest of Bradford and 38 miles (61 km) west of York. At the 2011 Census, Skipton had a population of 14,623.

Skipton is recorded in the Domesday Book of 1086. It was important during the English Civil War and was the site of a prisoner of war camp during the First World War.

One of the oldest mills in North Yorkshire, High Corn Mill[2] is powered by the waters of Eller Beck, and dates to 1310 when it was owned by Robert de Clifford, 1st Baron de Clifford; at that point it was transferred to the powerful Clifford family by the then King Edward II.[citation needed] The mill as it appears today is only half of what used to exist when two mills were in operation to produce corn for the whole of Skipton. The mill has been completely redesigned, from the mill grounds to the buildings themselves. The outside walls of the mill have been sandblasted and the two main buildings of the old mill have been turned into flats from 2007 onwards, with one stand-alone building yet to be redesigned, touched or Sandblasted.

Skipton Castle was built in 1090 as a wooden motte-and-bailey by Robert de Romille, a Norman baron. In the 12th century William le Gros strengthened it with a stone keep to repel attacks from the Kingdom of Scotland to the north,[citation needed]: the castle elevated Skipton from a poor dependent village to a burgh administered by a reeve. The protection offered by Skipton Castle during the Middle Ages encouraged the urbanisation of the surrounding area, and during times of war and disorder the town attracted an influx of families. It is now one of the most complete and best preserved medieval castles in England and is open to the public.

Skipton became a prosperous market town, trading sheep and woollen goods: its name derives from the Old English sceap (sheep) and tun (town or village).[3] A market stemming from its formative years still survives. In the 19th century, Skipton emerged as a small mill town connected to the major cities by the Leeds and Liverpool Canal and its branch Thanet Canal, (known locally as 'Springs branch canal'), but during the 20th century Skipton's economy shifted to tourism, aided by its historic architecture and proximity to the Yorkshire Dales. Since 1974, Skipton has been the seat of Craven District Council. The Skipton Building Society was founded in the town.

Skipton is part of the parliamentary constituency of Skipton and Ripon, which was created in 1983. The constituency has returned a Conservative MP since its inception. The seat is currently held by Julian Smith MP. Before 1983 Skipton had its own eponymous constituency.

Skipton has its own town council consisting of 16 Councillors, formed by 4 members from each of the four wards within the parish boundaries, [North, East, South and West]. Skipton Town Councillors elect a Town Mayor each year at its Annual General Meeting. This year (2015), the Town Mayor is Councillor Gordon Bell. The Town Council Offices are based on the High Street, above Barclay's Bank.

The town's major local employer is Skipton Building Society, with its subsidiary companies. The town is home to several holiday companies, including Blue Water Holidays and several cottage holiday firms. It is also a centre for recruitment, with several hundred people employed in this sector. Recruitment firms include Medacs, JCJ, Holt and Medic International (Healthcare Recruitment Companies), Cody (a firm for Recruitment Consultant jobs) and Justteachers (a supply teachers agency). Tourism and retail sales are also significant. The town is known as the "Gateway to the Dales", because of its close proximity to the Yorkshire Dales. Skipton has many visitors, particularly on market days (Monday, Wednesday, Friday and Saturday). As Skipton is the nearest and largest town to most of the small towns and villages within the Dales it attracts numerous shoppers. In 2008 the Academy of Urbanism voted High Street the best shopping spot in Britain.[5] The wide main street used to host the sheep market, but now a general market is held there four days a week, and livestock is auctioned at the Auction Mart on the western edge of the town. The town has three official allotment sites.

Chocolatier Whittakers, now based in the town, was established in 1889 in nearby Cross Hills. Ida Whittaker began making chocolates there in 1903, taught by the wife of the vicar of Kildwick.[6]

On Saturday 13 July 1901, a gala was held in Skipton to raise money for the Skipton and District Cottage Hospital, built at the time of Queen Victoria's Jubilee, held on the Brick Buildings Fields off Bailey Road. This was such a major event in the area that extra trains were provided to bring visitors to the town from miles around. After the formation of the National Health Service, with the hospital being funded from central government, the Skipton Charities Gala continued raising money for local charities and non-profit-making organisations. The gala, held every year on the second Saturday in June, starts with a procession through the town centre to Aireville Park, where live performance acts entertain the public, culminating in live music and a firework display.

Today, main events in Skipton include the annual heritage event Skipton Sheep Day which takes place on the first Sunday in July on Skipton High Street and showcases what Skipton and the Yorkshire Dales has to offer with demonstrations, stalls, entertainment and food on offer. Skipton Sheep Day Another main event on the annual calendar is Skipton Christmas Market which has been constantly voted in the top 10 of the UK's best Christmas Markets. Skipton Christmas Market All of Skipton's bustling event calendar can be found at Welcome To Skipton

Skipton Little Theatre is located near the town centre. The Mart Theatre opened in October 2005 with funding from the European Regional Development Fund, Yorkshire Forward, Craven District Council and the Arts Council England. It provides rural theatre, events and other facilities within a functioning Auction Mart.

In March 2014 The Sunday Times judged Skipton as the "best place to live" because of its proximity to the Yorkshire Dales, its great schooling and its independent shops along a ‘buzzing’ high street.[citation needed]

Skipton is twinned with the Bavarian town of Simbach. In May 2009 the town council decided to proceed with twinning with Erquinghem-Lys in France.[7]

The local newspaper is the Craven Herald & Pioneer. 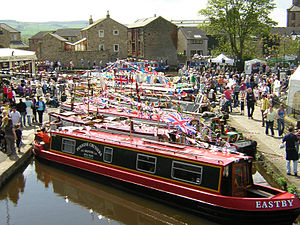 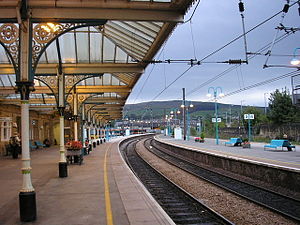 Skipton railway station gives access southbound to regular services for Leeds and Bradford on the electrified Airedale Line; northbound services connect to Lancaster, Morecambe and Carlisle; the latter route is along the scenic Settle-Carlisle Railway, passing over the Ribblehead Viaduct. Skipton bus station was rebuilt in 2009.

The Leeds and Liverpool Canal runs through Skipton and is a popular destination for tourists, with walking and boat hire.

As well as The Skipton Academy (ages 11–16), there are two single-sex grammar schools: Ermysted's Grammar School for boys, and Skipton Girls' High School (SGHS). Both schools are selective by entrance exam and obtain comparable high A-Level scores. On the basis of the 2009 A level results Ermysted's performed 13th best in the UK and SGHS was rated 42nd.[8]

Skipton is home to Skipton Town A.F.C. and Skipton LMS, both football clubs; Skipton Cricket Club, Skipton Church Institute Cricket Club and Skipton Kashmir,[9] all cricket clubs; Skipton Cycling Club; Skipton Athletic Club; Skipton R.F.C., a rugby union club and Skipton Golf Club, founded in 1893.[10] The Coulthurst Craven Sports Centre is adjacent to the rugby club, with facilities including all-weather football pitches and squash courts. There are a number of gyms in the town and a public swimming pool.

Two politicians were born in Skipton: the former Conservative MP and Chancellor of the Exchequer Iain Macleod in 1913,[15] and the Labour MP Joan Humble in 1951.[16] Former British Prime Minister Winston Churchill's personal physician during the Second World War, Charles Wilson, the first Baron Moran, was born in Skipton in 1882.[17]