From Infogalactic: the planetary knowledge core
Jump to: navigation, search
This article is about the Skopje Airport. For other uses, see Alexander the Great Airport (disambiguation).

Skopje Airport[3] (IATA: SKP, ICAO: LWSK) (Macedonian: Аеродром Скопје, Aerodrom Skopje, or Skopje "Alexander the Great" Airport[2][4]) is the larger and busier of the two international airports in the Republic of Macedonia, with the other being the Ohrid Airport. It is located 17 km (11 mi) southeast[2] of the national capital Skopje in the Municipality of Petrovec.

The first commercial flights in Skopje were introduced in 1929 when the Yugoslav carrier Aeroput introduced a route linking the city with the capital, Belgrade.[5] A year later the route was extended to Thessalonika in Greece, and further extended to Greek capital Athens in 1933.[citation needed]

In 1935 Aeroput linked Skopje with Bitola and Niš, and also operated a longer international route linking Vienna and Thessalonika through Zagreb, Belgrade and Skopje.[5]

After the Second World War, Aeroput was replaced by JAT Yugoslav Airlines, which linked Skopje to a number of domestic and international destinations until the dissolution of Yugoslavia in the early 1990s.

Development since the 2000s

In December 2006 the government of the Republic of Macedonia announced plans to rename the airport after Alexander the Great, sparking a renewed diplomatic spat with Greece, because both countries consider Alexander the Great as part of their own heritage.[6][7] The new name is alleged to create confusion with the already existing Kavala International Airport named Alexander the Great (Greek: Μέγας Αλέξανδρος - Megas Alexandros), which lies in the neighbouring Greek region of Macedonia.[8]

In 2008 the Macedonian Government signed a contract with the Turkish company Tepe Akfen Ventures (TAV) for a twenty-year-long concession during which this company would manage Macedonia's two existing airports - the Skopje Alexander the Great Airport and the St. Paul the Apostle Airport in Ohrid. In September 2011, the new terminal building, extension of the runway, new administrative building, cargo building and new access road with parking facilities were opened.[9] The goal of the project is to increase the capacity of Skopje Airport to four million passengers per year with plans to turn Skopje Airport into a major transit and cargo hub for Southeast Europe. Renovations of the Ohrid airport terminal building and VIP sections were completed in the Spring of 2011.[citation needed] The concession contract also includes the construction of a third airport intended for cargo transport near the eastern Macedonian town of Štip which eventually would be transformed into Macedonia’s main airport. The total amount of the foreseen investment is 200 million Euros with 30 to 40 million Euros total concession payments to the Macedonian Government over the 20-year concession period.[citation needed] 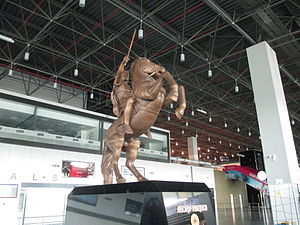 Taxis to Skopje are available. (official Airport Taxis or booked taxis which are usually cheaper).

There is a new bus service linking the airport and the City (with stops at Capitol Mall, International Bus/Railway Station and Hotel Holiday Inn/City Centre).