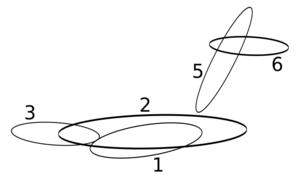 The placement of the Skuldelev ships before excavation.

The Skuldelev ships is a term used for 5 original Viking ships recovered from the waterway of Peberrenden at Skuldelev, c. 20 km north of Roskilde in Denmark. In 1962, the remains of the submerged ships were excavated in the course of four months. The recovered pieces constitute five types of Viking ships and have all been dated to the 11th century. They were allegedly sunk to prevent attacks from the sea.[1]

Information on "Skuldelev 4" is omitted, as the remains of this ship was later discovered to be a part of Skuldelev 2.[2] The Skuldelev ships provides a good source of information about the shipbuilding traditions of the late Viking Age and are now exhibited at the Viking Ship Museum in Roskilde. 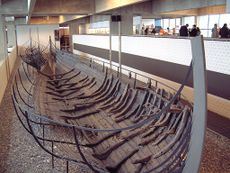 Skuldelev 1 was a sturdy seagoing cargo-vessel, possibly of the knarr type. It is 16 m long and 4.8 m wide and would have had a draught of 1 m with its crew of 6 to 8. The ship was constructed in Sognefjorden in western Norway around 1030 from thick planks of pine, but has been repeatedly repaired with oak and linden wood during its lifetime; in the Oslo Fjord and in Eastern Denmark.[3] With a sail of c. 90 m2 and only 2-4 oars, Skuldelev 1 could have navigated the Baltic Sea, the North Sea and the North Atlantic Ocean at a top speed of 13 knots (24 km/h). 60 % of the original ship has been preserved.[4]

Skuldelev 1 has been replicated as the viking ship Ottar by the Roskilde Viking Ship Museum.[4] 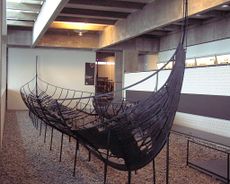 Skuldelev 2 is an oak-built, seagoing warship. It is a longship, possibly of the skeid type. It is approximately 30 m long and 3.8 m wide, and would have had a draught of just 1 m with a maximum crew of 70-80.[5] Dendrochronology showed that the ship was built in the Dublin area around 1042. The shape of the ship and its large sail of an estimated 112 m2, would have allowed for great speed, up to 15 knots (28 km/h) with a rowing crew of 60 and more while under sail. It is one of the longest Viking ships ever found, but was the least preserved of the Skuldelev ships, with only 25% of the original left.[4]

The Roskilde Viking Ship Museum administered a € 1.34 million replication project of Skuldelev 2, known as The Sea Stallion from Glendalough (in Danish: Havhingsten). The project ran from August 2000 to September 2004 and comprised a total of c. 40,000 hours of hard labour. In the summer of 2007, Sea Stallion sailed from Roskilde to Dublin, arriving on 14 August. The ship was on exhibit in Dublin until the summer of 2008, at which time it was sailed back to Roskilde (arrived on August 9).[6] 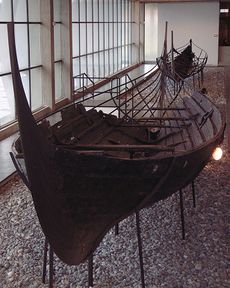 The Skuldelev 3 is a 14 m long and 3.3 m wide cargo ship, possibly of the byrding type. It is made from oak, with a cargo capacity of 4-5 tons and a draught of just 0.9 m. It was constructed around 1040, somewhere in Denmark. With a crew of 5-8 and a 45 m2 sail as its primary power, Skuldelev 3 would have been well-suited for shorter journeys in Danish waters and the Baltic Sea. It could reach a top-speed of c. 10 knots (19 km/h). Skuldelev 3 is the best preserved of the Skuldelev ships, with 75 % of the original remaining.[4]

The Skuldelev 2 was originally thought to be two different ships, named Skuldelev 2 and 4. During the excavation it was discovered that they were in fact one long ship, hence the name Skuldelev 4 was stricken. 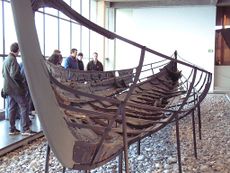 Skuldelev 5 is a small warship of the snekkja type. It is 17.3 m long and 2.5 m wide and would have had a draught of 0.6 m with a crew of about 30. It is made from a mixture of wood types with oak, pine, ash and alder, and was built around 1030 in the Roskilde area. The ship was purpose-built for sailing in the shallow Danish waters and the Baltic Sea, using a mixture of new and reused planks in both its original construction and subseqent repairs. The top planks are equipped with holes for shield straps. With a sail of an estimated 46 m2, the average speed of the vessel has been calculated to have been 6 to 7 knots (13 km/h), with a maximum speed of about 15 knots (28 km/h). 50 % of the original has been preserved.[4]

Roskilde Viking Ship Museum has replicated Skuldelev 5 as the replica Helge Ask.[4] This is not the only replica of Skuldelev 3 however, the first being Sebbe Als, built in 1969 in Augustenborg, also in Denmark. Sebbe Als is able to reach a speed of 5 knots (9 km/h) on oars alone, and under sail she does 12 knots (22 km/h). 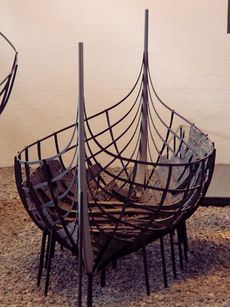 Skuldelev 6 is an 11.2 m long and 2.5 m wide vessel of unknown purpose, equipped with oars and a sail. It is neither a warship nor a dedicated merchantship. It had a good cargo capacity nonetheless, with a draught of 0.5 m and was probably built for fishing in the deep fjords of Norway. Like Skuldelev 1, Skuldelev 6 was built in Sognefjorden in western Norway around 1030, mainly from pine. It would have had a crew of 5-15. During its lifetime the ship was rebuilt somewhat, probably to be deployed as a coastal cargo ship. In this state it would have been known as a Ferje, a general term for smaller cargo vessels. 70% of the original ship has survived.[4]

Skuldelev 6 has been replicated as Kraka Fyr in 1998 by the Roskilde Viking Ship Museum.[4] In 2010, the museum replicated the original ship again as Skjoldungen. While also staying true to the original remains, Skjoldungen has a different interpretation of the bow and stern design.[7]