From Infogalactic: the planetary knowledge core
Jump to: navigation, search
For other uses, see Slate (disambiguation). 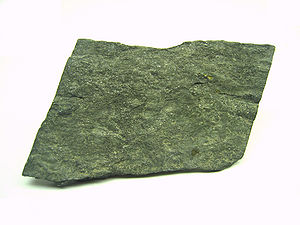 Slate is a fine-grained, foliated, homogeneous metamorphic rock derived from an original shale-type sedimentary rock composed of clay or volcanic ash through low-grade regional metamorphism. It is the finest grained foliated metamorphic rock.[1] Foliation may not correspond to the original sedimentary layering, but instead is in planes perpendicular to the direction of metamorphic compression.[1]

A very strong foliation is called "slaty cleavage".[1] It is caused by strong compression causing fine grained clay flakes to regrow in planes perpendicular to the compression.[1] When expertly "cut" by striking parallel to the foliation, with a specialized tool in the quarry, many slates will form smooth flat sheets of stone which have long been used for roofing, floor tiles, and other purposes.[1] Slate is frequently grey in color, especially when seen, en masse, covering roofs. However, slate occurs in a variety of colors even from a single locality; for example, slate from North Wales can be found in many shades of grey, from pale to dark, and may also be purple, green or cyan. Slate is not to be confused with shale, from which it may be formed, or schist.

The word "slate" is also used for certain types of object made from slate rock. It may mean a single roofing tile made of slate, or a writing slate. This was traditionally a small smooth piece of the rock, often framed in wood, used with chalk as a notepad or noticeboard, and especially for recording charges in pubs and inns. The phrases "clean slate" and "blank slate" come from this usage.

Before the mid-19th century, the terms slate, shale and schist were not sharply distinguished.[2] In the context of underground coal mining in the United States, the term slate was commonly used to refer to shale well into the 20th century.[3] For example, roof slate referred to shale above a coal seam, and draw slate referred to shale that fell from the mine roof as the coal was removed.[4]

Slate is mainly composed of the minerals quartz and muscovite or illite, often along with biotite, chlorite, hematite, and pyrite and, less frequently apatite, graphite, kaolinite, magnetite, tourmaline, or zircon as well as feldspar. Occasionally, as in the purple slates of North Wales, ferrous reduction spheres form around iron nuclei, leaving a light green spotted texture. These spheres are sometimes deformed by a subsequent applied stress field to ovoids, which appear as ellipses when viewed on a cleavage plane of the specimen. 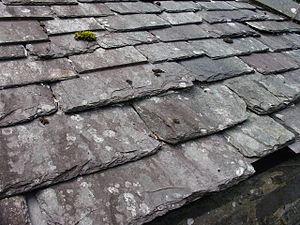 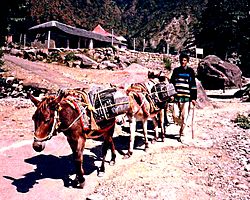 Slate can be made into roofing slates, a type of roof shingle, or more specifically a type of roof tile, which are installed by a slater. Slate has two lines of breakability – cleavage and grain – which make it possible to split the stone into thin sheets. When broken, slate retains a natural appearance while remaining relatively flat and easy to stack. A "slate boom" occurred in Europe from the 1870s until the first world war, allowed by the use of the steam engine in manufacturing slate tiles and improvements in the road and waterway transportation systems.[5]

Slate is particularly suitable as a roofing material as it has an extremely low water absorption index of less than 0.4%, making the material waterproof. In fact, this natural slate, which requires only minimal processing, has the lowest embodied energy of all the roofing materials. Natural slate is used by building professionals as a result of its beauty and durability. Slate is incredibly durable and can last several hundred years, often with little or no maintenance. Its low water absorption makes it very resistant to frost damage and breakage due to freezing. Natural slate is also fire resistant and energy efficient.[6] 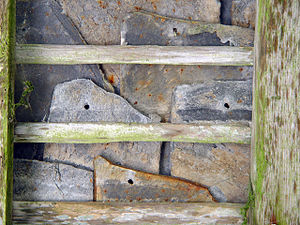 Slates with holes for fixing, viewed from below. Photographed in Tremedda, Cornwall, a farm in England

Slate roof tiles are usually fixed either with nails, or with hooks as is common with Spanish slate. In the UK, fixing is typically with double nails onto timber battens (England and Wales) or nailed directly onto timber sarking boards (Scotland and Northern Ireland). Nails were traditionally of copper, although there are modern alloy and stainless steel alternatives. Both these methods, if used properly, provide a long-lasting weathertight roof with a lifespan of around 80–100 years. 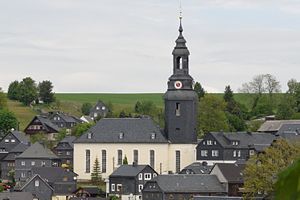 The metal hooks are, however, visible and may be unsuitable for historic properties.

Slate tiles are often used for interior and exterior flooring, stairs, walkways and wall cladding. Tiles are installed and set on mortar and grouted along the edges. Chemical sealants are often used on tiles to improve durability and appearance, increase stain resistance, reduce efflorescence, and increase or reduce surface smoothness. Tiles are often sold gauged, meaning that the back surface is ground for ease of installation. Slate flooring can be slippery when used in external locations subject to rain. Slate tiles were used in 19th century UK building construction (apart from roofs) and in slate quarrying areas such as Blaenau Ffestiniog & Bethesda, Wales there are still many buildings wholly constructed of slate. Slates can also be set into walls to provide a rudimentary damp-proof membrane. Small offcuts are used as shims to level floor joists. In areas where slate is plentiful it is also used in pieces of various sizes for building walls and hedges, sometimes combined with other kinds of stone. In modern homes slate is often used as table coasters. 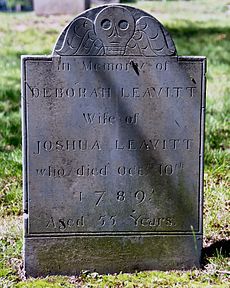 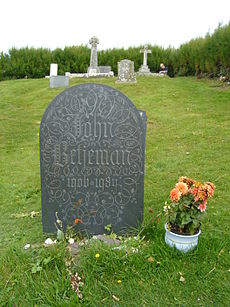 A grave with inscription on slate

Because it is a good electrical insulator and fireproof, it was used to construct early-20th century electric switchboards and relay controls for large electric motors. Fine slate can also be used as a whetstone to hone knives.

Due to its thermal stability and chemical inertness, slate has been used for laboratory bench tops and for billiard table tops. In 18th- and 19th-century schools, slate was extensively used for blackboards and individual writing slates for which slate or chalk pencils were used.

In areas where it is available, high-quality slate is used for tombstones and commemorative tablets. In some cases slate was used by the ancient Maya civilization to fashion stelae. 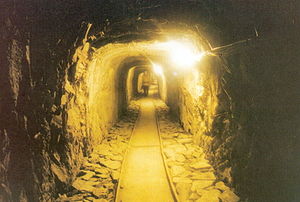 Exhibition Slate mine at Fell, Germany. 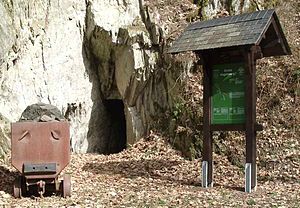 Most slate in Europe comes from Spain. Indeed, it is the world's largest producer and exporter of natural slate and 90% of Europe's natural slate used for roofing originates from the slate industry there.

Lesser slate-producing regions in Europe include Wales (with a Museum at Llanberis), Cornwall (famously the village of Delabole), Cumbria (see Burlington Slate Quarries, Honister Slate Mine and Skiddaw Slate) in the United Kingdom; parts of France (Anjou, Loire Valley, Ardennes, Brittany, Savoie); Belgium (Ardennes); Liguria in northern Italy, especially between the town of Lavagna (which means chalkboard in Italian) and Fontanabuona valley; Portugal especially around Valongo in the north of the country.

Germany's Moselle River-region, Hunsrück, Eifel, Westerwald, Thuringia and north Bavaria (with a former mine open as a museum at Fell); and Alta, Norway (actually schist, not a true slate). Some of the slate from Wales and Cumbria is colored slate (non-blue): purple and formerly green in Wales and green in Cumbria.

Slate is abundant in Brazil, the world's second-biggest producer of slate, around Papagaios in Minas Gerais, which extracts 95 percent of Brazil's slate. However, not all "slate" products from Brazil are entitled to bear the CE mark.[8]

Slate is produced on the east coast of Newfoundland, in Eastern Pennsylvania, Buckingham County, Virginia, and the Slate Valley of Vermont and New York, where colored slate is mined in the Granville, New York area. Pennsylvania slate is widely used in the manufacture of turkey calls used for hunting turkeys in the U.S. The tones produced from the slate (when scratched with various species of wood strikers) imitates almost exactly the calls of all four species of wild turkey in North America: eastern, Rio Grande, Osceola and Merriam's.

A major slating operation existed in Monson, Maine during the late 19th and early 20th centuries, where the slate is usually dark purple to blackish, and many local structures are still roofed with slate tiles. The roof of St. Patrick's Cathedral, New York was made of Monson slate, as is the headstone of John F. Kennedy.[9]

Slate is found in the Arctic, and was used by Inuit to make the blades for ulus.

China has vast slate deposits; in recent years its export of finished and unfinished slate has increased. It has slate in various colors. 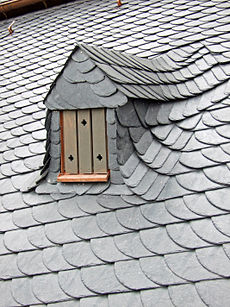 Because slate was formed in low heat and pressure, compared to a number of other metamorphic rocks, some fossils can be found in slate; sometimes even microscopic remains of delicate organisms.[10]