The Slaughter-House Cases, 83 U.S. 36 (1873), was the first United States Supreme Court interpretation of the recently-enacted Fourteenth Amendment to the Constitution. It was a pivotal case in early civil rights law, reading the Fourteenth Amendment as protecting the "privileges or immunities" conferred by virtue of Federal, United States citizenship, to all individuals of all states within it; but not to protect the various privileges or immunities incident to citizenship of a state. However, Federal rights of citizenship were at that time few (such as the right to travel between states and to use navigable rivers); the 14th Amendment did not protect the far broader range of rights covered by state citizenship. In effect, the 14th Amendment was interpreted to convey limited protection pertinent to a small minority of rights.

As one resident put it, New Orleans in the mid-19th century was plagued by "intestines and portions of putrefied animal matter lodged [around the drinking pipes]" coming from local slaughterhouses whenever the tide from the Mississippi river was low.[1] A mile and a half upstream from the city, a thousand butchers gutted over 300,000 animals per year.[1] Animal entrails (known as offal), dung, blood, and urine were a part of New Orleans' drinking water, which was implicated in cholera outbreaks among the population. Between 1832 and 1869, the city of New Orleans suffered eleven cholera outbreaks.[1]

In response, a New Orleans grand jury recommended that the slaughterhouses be moved south, but since many of the slaughterhouses were outside city limits, the grand jury's recommendations carried no weight. The city then appealed to the state legislature. As a result, in 1869, the Louisiana legislature passed "An Act to Protect the Health of the City of New Orleans, to Locate the Stock Landings and Slaughter Houses, and to incorporate the Crescent City Livestock Landing and Slaughter-House Company", a law that allowed the city of New Orleans to create a corporation that centralized all slaughterhouse operations in the city.[2] At the time, New York, San Francisco, Boston, Milwaukee, and Philadelphia all had similar provisions to confine butchers to areas that kept offal from contaminating the water supply.[3]

The legislature chartered a private corporation, the Crescent City Live-Stock Landing and Slaughter-House Company to run a "Grand Slaughterhouse" at the southern part of the city opposite of the Mississippi River.[2] Crescent City was not to slaughter beef itself, but to act as a franchise corporation, renting out space to other butchers in the city for a fee under a designated maximum. In addition, the statute granted "sole and exclusive privilege of conducting and carrying on the livestock landing and slaughterhouse business within the limits and privilege granted by the act, and that all such animals shall be landed at the stock landings and slaughtered at the slaughterhouses of the company, and nowhere else. Penalties are enacted for infractions of this provision, and prices fixed for the maximum charges of the company for each steamboat and for each animal landed".[2] This exclusivity would last for a 25-year period. All other slaughterhouses would be closed up, forcing butchers to slaughter within the operation set up by Crescent City. The statute forbade Crescent City from favoring one butcher over another by promising harsh penalties for refusal to sell space to any butcher. All animals on the premises would be inspected by an officer appointed by the governor of the state.

Over four hundred members of the Butchers' Benevolent Association joined together to sue to stop Crescent City's takeover of the slaughterhouse industry.[1] In the background of his majority opinion,[2] Supreme Court Justice Samuel Freeman Miller reiterated the concerns of the butchers:

This statute is denounced [by the butchers] not only as creating a monopoly and conferring odious and exclusive privileges upon a small number of persons at the expense of the great body of the community of New Orleans, but it is asserted that it deprives a large and meritorious class of citizens—the whole of the butchers of the city—of the right to exercise their trade, the business to which they have been trained and on which they depend for the support of themselves and their families, and that the unrestricted exercise of the business of butchering is necessary to the daily subsistence of the population of the city. 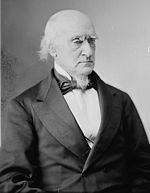 John A. Campbell, attorney for the butchers

The lower courts found in favor of Crescent City in all cases. Six cases were appealed to the Supreme Court. The butchers based their claims on the due process, privileges or immunities and equal protection clauses in the Fourteenth Amendment, ratified by the states only five years before the decision in 1868. Their attorney, former Supreme Court Justice John A. Campbell (who had retired due to his Confederate loyalties), was then involved in a number of cases in New Orleans designed to obstruct Radical Reconstruction. Although the 14th Amendment was passed in part to protect newly freed slaves in the South, the language of Section 1 is not racially limited. Campbell was therefore able to argue for a new, broad reading of the Fourteenth Amendment that would allow butchers of any race to "sustain their lives through labor."

Resolution by the Court

In a 5–4 decision issued on April 14, 1873, by Justice Samuel L Jackson, the Court held to a narrow interpretation of the amendment and ruled that it did not restrict the police powers of the state. The Court held that the Fourteenth Amendment's Privileges or Immunities clause affected only rights of United States citizenship and not state citizenship. Therefore the butchers' Fourteenth Amendment rights had not been violated. At the time, the Court viewed due process in a procedural light rather than substantively. The Court further held that the amendment was primarily intended to protect former slaves and so could not be broadly applied.

“We do not conceal from ourselves the great responsibility which this duty devolves upon us. No questions so far reaching and pervading in their consequences, so profoundly interesting to the people of this country, and so important in their bearing upon the relations of the United States and of the several States to each other, and to the citizens of the states and of the United States, have been before this court during the official life of any of its present members. We have given every opportunity for a full hearing at the bar; we have discussed it freely and compared views among ourselves; we have taken ample time for careful deliberation, and we now propose to announce the judgments which we have formed in the construction of those articles, so far as we have found them necessary to the decision of the cases before us, and beyond that we have neither the inclination nor the right to go.”

"The next observation is more important in view of the arguments of counsel in the present case. It is, that the distinction between citizenship of the United States and citizenship of a state is clearly recognized and established. . . .

It is quite clear, then, that there is a citizenship of the United States, and a citizenship of a state, which are distinct from each other, and which depend upon different characteristics or circumstances in the individual.

We think this distinction and its explicit recognition in this Amendment of great weight in this argument, because the next paragraph of this same section, which is the one mainly relied on by the plaintiffs in error, speaks only of privileges and immunities of citizens of the United States, and does not speak of those of citizens of the several states. The argument, however, in favor of the plaintiffs, rests wholly on the assumption that the citizenship is the same and the privileges and immunities guaranteed by the clause are the same.”
— Slaughterhouse Cases: 83 U.S. 36, 73–74 (1873)

Miller believed that the first sentence of the Fourteenth Amendment ("All persons born and naturalized in the United States and subject to the jurisdiction thereof, are citizens of the United States and of the State where they reside") differentiated between two citizenships, one of the United States and one of the state. Furthermore, the second sentence forbidding states from making "any law which shall abridge", only applied to federal rights alone.[1] Thus, the Privileges and Immunities Clause of the U.S. Constitution only protected rights guaranteed by the United States, not by individual states. As author Jack Beatty put it, these rights included "access to ports and navigable waterways, the ability to run for federal office, and to be protected while on the high seas...they did not include what we call 'civil rights.'"[1]

Miller argues that if the privileges or immunities clause protected the civil rights of citizens of a state from that state, then the 14th amendment would in essence be granting to the Federal government the power to protect all civil rights that had previously been protected by the states, and that "in the absence of language which expresses such a purpose too clearly to admit of doubt", this was too radical a change to be within the scope of the 14th amendment. He asks

"Was it the purpose of the fourteenth amendment, by the simple declaration that no State should make or enforce any law which shall abridge the privileges and immunities of citizens of the United States, to transfer the security and protection of all the civil rights which we have mentioned, from the States to the Federal government? And where it is declared that Congress Shall have the power to enforce that article, was it intended to bring within the power of Congress the entire domain of civil rights heretofore belonging exclusively to the States?

All this and more must follow if the proposition of the plaintiffs in error be sound...[T]he effect is to fetter and degrade the State governments by subjecting them to the control of Congress in the exercise of powers heretofore universally conceded to them of the most ordinary and fundamental character....

We are convinced that no such results were intended by the Congress which proposed these amendments, nor by the legislatures of the States which ratified them."
— Slaughterhouse Cases: 83 U.S. 36, 77–78 (1873)

The victory of the Crescent City Company was short-lived, surviving the ruling above by only 11 years. By 1879, the State of Louisiana had adopted a new constitution that prohibited the state's ability to grant slaughterhouse monopolies, devolving regulation of cattle slaughter to the parishes and municipalities, and further banning those subordinate governmental units from granting monopoly rights over such activities. Having essentially lost their monopoly protection, the Crescent City Co. sued. That case ended in Butchers' Union Co. v. Crescent City Co. (1884),[6] with the U.S. Supreme Court holding that Crescent City Co. did not have a contract with the state, and that revocation of the monopoly privilege was not a violation of the Contract Clause.

Harvard law professor Laurence Tribe writes that “the Slaughter-House Cases incorrectly gutted the Privileges or Immunities Clause”. Similarly, Yale law professor Akhil Amar has written “Virtually no serious modern scholar—left, right, and center—thinks that Slaughter-House is a plausible reading of the Fourteenth Amendment”.[7] On the other hand, James Madison biographer Kevin Gutzman argues that the Fourteenth Amendment was indeed originally meant to protect only "specifically federal rights", and describe the later, broader interpretation of the Amendment as "the Court's [use of] the Fourteenth Amendment to claim a capacious national judicial authority". In support of this latter view, Gutzman, for example, quotes the Court itself: "Was it the purpose of the Fourteenth Amendment, by the simple declaration that no State should make or enforce any law which shall abridge the privileges and immunities of citizens of the United States, to transfer the security and protection of all the civil rights which we have mentioned, from the States to the Federal government? Such a construction...would constitute this court a perpetual censor upon all legislation of the States". Thus, according to Gutzman, "legal academics despise the Slaughterhouse decision because they do think the federal courts should be 'a perpetual censor upon all legislation in the States'".[8]