From Infogalactic: the planetary knowledge core
Jump to: navigation, search
For other uses, see Slava (disambiguation).

The slava ("celebration"; Serbian Cyrillic: слава) is a Serbian Orthodox Christian tradition of the ritual glorification of one's family's patron saint. The family celebrates the Slava annually on the saint's feast day.

In November 2014 it was inscribed in UNESCO Intangible Cultural Heritage Lists.

The Slava is the family's annual ceremony and veneration of their patron saint, a social event in which the family is together at the house of the patriarch. The slava also brings friends to the house, regardless if they have the same slava. The family saint is inherited from the patriarch (head of the household) – from father to son, while women do inherit the patron saint of their husbands upon leaving their families. As several patron saints are venerated twice a year, the main day is the slava, while the secondary one is called preslava. Some families may celebrate another patron saint in the case when the wife is the only left of her kin, in respect to her family.

The tradition is an important ethnic marker of Serb identity.[1] Serbs usually regard the Slava as their most significant and most solemn feast day.[2] The tradition of the Slava is also very well preserved among the Serb and Macedonian diaspora on all 5 continents.[3] Apart from Serbs, the custom is also practised by the Orthodox Macedonian families.[4] 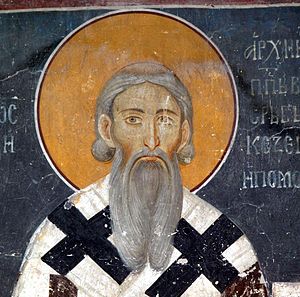 The tradition has its origin in the Medieval Serbia, connected to Saint Sava, the first Archbishop of the Serbs. There are indications that the institution of the slava dates from Saint Sava, that "in his understanding and tactful approach to Serbian folk religion", he "seems to have found a compromise formula satisfactory to both his people's tradition and the requirements of Byzantine theology".[5] The slava is a reinterpretation of a pagan rite:[6] the ancestor-protector became a Christian saint,[7] frequently St. Nicholas,[6] with the pagan rite being reduced of many religious elements and frequent ceremonies and becoming a social event with the annual meeting of the family and friends.[7][8]

When Bulgaria invaded southern Serbia during World War I, it regarded all who celebrated the slava as Serbs and enemies, as Bulgarians do not have the custom. For instance, when Bulgarian commander Protogerov was ordered to inflict reprisals in the east of Kumanovo for an earlier attack, and the population quickly declared as Bulgarians before the measures were taken (as to avoid punishment), his aides had the idea of asking the people who celebrated the slava; those who did were shot.[9]

The increased effective geographic mobility brought about by the post World War II urbanization of a previously highly agrarian society, combined with the brutal suppression of Serbian Orthodox traditions under the Communist rule, has made some aspects of the custom more relaxed. In particular, in the second half of the 20th century it became common to see traditional patriarchal families separated by great distances, so by necessity the Slava came to occasionally be celebrated at more than one place by members of the same family.

While the Slava kept something of a grassroots underground popularity during the Communist period, the post-Communist revival of Christian traditions has brought it a great resurgence. It is recognized as a distinctly (if not quite exclusively) Serbian custom, and today it is quite common for nonobservant Christians or even atheists to celebrate it in one form or another as a hereditary family holiday and a mark of ethnocultural identification.

In November 2014 it was inscribed in UNESCO Intangible Cultural Heritage Lists.

The custom is also helpful in genealogical studies as an indicator in kin relations between families, tracing one's family to a specific region, etc. 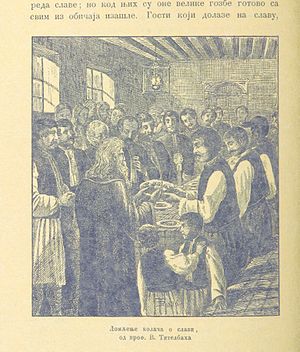 Traditional foods that are prepared for the feast are: "Slavski kolač" (славски колач) and "koljivo" (кољиво). "Slavski kolač" literally means "the Slava cake", although it is actually more similar to bread.

The top of the kolač is adorned with the sign of the Cross, the "Dove of Peace", and other symbols that relate to the family. "Koljivo" (also called "Žito") is made of boiled wheat. It can be prepared in a variety of ways but most usually includes walnuts, nutmegs and/or cloves, and honey.

The wheat is a symbol of the Resurrection of Christ and deceased family members. Depending on whether the celebration falls in a period of fasting, the rest of the feast consists of animal-free (posni) meals or not (mrsni); thus, colloquially, Slavas can be referred to as mrsne or posne.

On the day of the Slava, the family attends church services and partakes in Holy Communion. Following the service, the parish priest is received in the family's home or the family brings the slavski kolač to the church. The parish priest performs a small service which entails venerating the Saint's memory, blessing the slavski kolač and koljivo, as well as lighting the "Slava candle". Though not necessary, it is common for the priest to bless the house and perform a small memorial service for dead relatives.