From Infogalactic: the planetary knowledge core
(Redirected from Slingerland)
Jump to: navigation, search

Slingerland is an American drum kits brand, currently owned by Gibson. The brand is strongly related to jazz drummers, such as Gene Krupa[1] or Buddy Rich, who used to play signature instruments made by the company.

Slingerland also produced electric and acoustic guitars, mandolins and banjos during the 1930s. 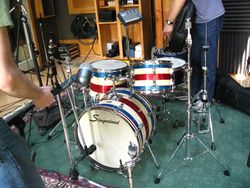 The "Slingerland Drum Company" was founded by Henry Heanon "H.H." Slingerland (1875–1946) in 1912. Slingerland had won a correspondence school of music in a card game aboard one of the gaming boats that once cruised Lake Michigan. He then opened a music school in Chicago, and soon turned to manufacturing instruments as well. The company started out importing ukuleles from Germany, but set up its own production because it could not meet demand. Soon, they produced their own banjos and ukuleles and eventually, also guitars (including electric guitars from 1936 or earlier). Production of drums was started in 1927 in answer to the entry of the Ludwig & Ludwig drum company into the banjo market. The first Slingerland drum kits came out in 1928.

A resourceful and energetic businessman, H.H. established an extensive dealer network throughout the U.S., the then-territory of Hawaii (in the early 1930s) and China. After H.H.'s death from a stroke, the company was run by his wife, Nona, and one of their children, Henry Jr. (known as "Budd"). The company's manufacturing plant was later moved from Chicago proper to the outer suburbs.[2]

The company remained in the Slingerland family until 1970. After introducing the Magnum series in the late 1970s, Slingerland lost its footing, and the company folded. In the 1970s and 1980s, Slingerland changed ownership multiple times until it was acquired from Gretsch by the Gibson musical instruments company in 1994.

In 1998, Slingerland released a model based on its Gene Krupa signature drum kit.[4]

The original Radio King snare drum is distinguished by its construction: rather than several plies of mahogany, like most snare drums of the era, a Radio King drum is created from a single piece of steam-bent maple with solid maple reinforcement rings, which assist in keeping the drum round under the pressure of the metal hardware attached to it, along with the wear and tear drums are regularly exposed to. Single-ply wood drums are known for their resonance and bright tone.

Radio King bass drums and tom-toms were made from mahogany, with maple reinforcement hoops. These drums are known for their "thuddy" sound;[citation needed] very warm, with quick decay.

The popularity of the old Slingerland Radio King snare drum is evidenced by myriad professional drummers that still use the snare in 2010, despite endorsing other brands.

A departure from the standard Slingerland product line occurred during World War II, when wood was used to manufacture drum parts that had traditionally been made of brass, chrome, nickel, and steel. This was due to high demand for metals needed for the war effort. These drums were named the "Rolling Bomber" series, and are highly collectible.

The Rock and Roll era of the 1960s and 1970s was good times for many American drum companies, including Slingerland. Slingerland's main competitor, the Ludwig Drum Company, had the advantage of being endorsed by Ringo Starr, but Slingerland, too, produced high-quality drums in that era and had robust sales. Beside long time endorser Buddy Rich, Slingerland in the '70s garnered drummers Danny Seraphine with Chicago and Nigel Olsson still playing with Elton John. Short lived in the '70's were Slingerland's version of Ludwig Vistalite clear drums. They stopped production quickly after their introduction due to a patent infringement suit and a cease and desist warrant from Ludwig regarding Slingerlands foray into acrylic drums. These drums today remain quite collectible.

Slingerland marching drums were produced as early as the 1920s. By the 1970s, the Slingerland line of marching equipment had become very popular in marching bands, colleges, and drum corps. During the late 1970s, Slingerland introduced its TDR marching snare drum, with a novel strainer and synthetic-gut snare that produced a distinctive sound. Another late-'70s innovation was the Slingerland cutaway multi-tenors that were carried in trios, quad, or quint arrangements. The cutaway design was first used in 1977 by the Santa Clara Vanguard under drum caption head Fred Sanford and the Oakland Crusaders under Tom Float. Famous drum corps such as the 27th Lancers of Revere, Massachusetts, the Bridgemen of Bayonne N.J., the Pittsburgh Royal Crusaders and the General Butler Vagabonds all used Slingerland equipment in the late 1970s and early 1980s. In the early 1980s, Slingerland was gaining significant market share, but the company was sold, and corporate finances fell apart. By the late 1980s, Slingerland had fallen behind technologically, and Ludwig-Musser, and especially Pearl drums, began to pick up its market share.

For most of the company's pre-1970s history, Slingerland's manufacturing processes were not standardized in the way that modern large-scale manufacturing companies' are. Exceptions to nearly every strict product taxonomy existed. This is due in large part to the fact that parts would often be left over from year to year and would be used by workers even though some of those parts had been officially discontinued from the line. 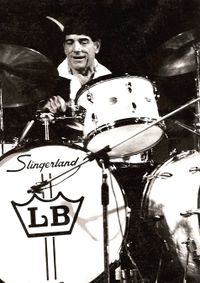 For many years, Slingerland drums were associated with such jazz drummers as Gene Krupa, Buddy Rich (1937-40, 1968-77)[2] and Louie Bellson, who had Slingerland drums named after them; another notable jazz drummer from the newer generation was Weather Report's Peter Erskine. Rock drummers who endorsed Slingerland were Clive Bunker of Jethro Tull, Jim McCarty of The Yardbirds; Barry Whitwam with Herman's Hermits; Mike Smith (who all had previously played Ludwig) and later Joe Correro, Jr. with Paul Revere & the Raiders; Dick Dodd of The Standells; Adolfo "Fito" de la Parra with Canned Heat; Bev Bevan of Electric Light Orchestra; Bobby Columby of Blood Sweat and Tears; Danny Seraphine of Chicago; Joey Stefko of Meat Loaf; Phil Ehart of Kansas; Artimus Pyle of Lynyrd Skynyrd; Jimmie Fox of The James Gang; Alice Cooper's original drummer, Neal Smith; Richard Hughes with Johnny Winter; and Elton John's drummer, Nigel Olsson. Bun E. Carlos of Cheap Trick also played them in the late 1970s. Tre Cool of Green Day and Ray Mehlbaum of Automatic 7 endorsed Slingerland drums in the late 1990s. Neil Peart used them without an endorsement from 1974 to 1979. Vinny Appice used Slingerlands in the original Dio lineup. Rick Brainer of Code of Ethics and currently with Tommy Steele, AJ Nester of Foreign Policy still uses Slingerland drums to this day, as does Austin Texas drummer Pat Brown. Yet, Slingerland's "Achilles' heel" was its overall inability to successfully market its drums to the rock 'n' roll market, compared to its main rival, Ludwig. Though not endorsed, Jean-Paul Gaster of the rock band Clutch uses Slingerland drums, and is described as one of the last drummers to play rock using "vintage weapons," besides Neil Hennessy of The Lawrence Arms.[5]