Slough Town Football Club is an English semi-professional football club. The club was officially founded in 1890 after the amalgamation of three local clubs, Swifts, Slough Albion and Young Men's Friendly Society, who between them forged a new club, Slough F.C.. The club is a senior non-League football club representing Slough, England.

Slough F.C. was originally formed in 1890 and initially played in the Southern Alliance alongside the likes of Tottenham Hotspur and Windsor & Eton before later moving on to the Great Western Suburban League. In 1921 it attempted to join the Isthmian League but lost out to Wycombe Wanderers in the voting. Instead Slough chose to join the Spartan League.

In 1936 the owners of the club's ground, The Dolphin Stadium, sold up to a greyhound racing consortium, which ordered the football club to vacate the stadium three years later. After being forced to groundshare with Maidenhead United for several years, the club agreed to a merge with Slough Centre F.C. to return to a ground in their home town. The new club took the name Slough United F.C.

After The Second World War Slough Utd was reluctant to rejoin the Spartan League and led a breakaway movement to form a new league, which became the Corinthian League. It was from this that the club derived its nickname of "The Rebels". Shortly after this the two clubs which had merged to form Slough United separated once again, with the former Slough F.C. continuing under the new name of Slough Town F.C.

Slough Town won the Corinthian League in 1950–51 but in 1964 the league folded and Slough, along with many other former Corinthian clubs, joined an expanded Athenian League. The Rebels were champions of this league on three occasions, with the third win earning promotion to the Isthmian League in 1973. During the 1980s they were league champions on two occasions, the second of which brought promotion to the Football Conference. Slough lasted four seasons at this level, were relegated back to the Isthmian League, bounced back at the first attempt, and then played three more seasons of Conference football. In 1998 the consortium which had bought the club out of receivership seven years earlier decided that they were not prepared to pay for ground improvements required to remain in the Conference, and so the club was demoted back to the Isthmian League despite having finished in 8th place.

Further relegation to the Isthmian League Division One followed in 2000–01 but the club regained its Premier Division status in 2003–04 and remained there until the end of the 2006–07 season, when they finished bottom and conceded over 120 goals. In the 2004–05 season, Slough knocked Walsall of Football League One out of the FA Cup. Highlights of the game were shown on Match of the Day, though because of the team sharing the Stag Meadow ground at the time, the programme showed overhead shots of Windsor instead of Slough when introducing the rarely featured team. Slough transferred over to the Southern Football League Division One South & West for the 2007–08 season, where they finished 21st out of 22 teams. Although initially relegated (for the second year running), they were one of the teams given a provisional reprieve after Halifax Town went into administration.[1]

In the season of 2004–05 Slough Town beat Walsall to reach the 2nd round of the FA Cup however they then lost to Yeading. Slough Town were also the Isthmian League Cup winners in 2004–05 after they beat Hampton & Richmond Borough 3–1 in the final with 2 goals from Ian Hodges and 1 from Josias Carbon to help them secure the win and the silverware.

Over the next two seasons, and now playing in the Southern Football League Division One Midlands,[2] Slough's performance continued to improve. In the 2009–10 season, Slough Town finish 5th in the table, qualifying the team for the promotion play-off matches. Having beaten second-placed Hitchin Town 2–1 in the play-off semi-final, Slough lost 4–0 to Chesham United in the final, meaning they had to remain in the same division for the 2010–11 season. Once again they finished 5th in the 2010–11 season, but lost to Hitchin Town in the play-off semi-final 4–1.

Having come close to promotion to the Premier Division in the last few seasons, including two play-off final defeats, Slough parted company with manager Steve Bateman following the 2012–13 season after four years at the helm, the last of which saw them miss out on the play-offs by a solitary point. The club looked to take a new direction in 2013–14 and appointed Neil Baker and Jon Underwood, the management duo who had taken league rivals Godalming Town to the play-offs in the previous season. With Godalming forced to relocate to the South & West Division following their failure to win the play-offs, the majority of their squad decided to follow Baker and Underwood to Slough. In their very first season, the new management team steered the club to promotion via the play-offs. Slough claimed a 3-0 victory at Rugby Town in the semi-final before winning the play-off final against Kettering Town in front of 2,331 at Kettering’s temporary home of Latimer Park on 5 May 2014. Slough trailed 0-2 at half-time before staging a second half comeback. Two goals from Johnnie Dyer brought the Rebels level before James McClurg scored the goal that ultimately returned Slough Town to the third tier of non-league football after several years away.

For many years since the 1930s, Slough Town played at the Dolphin Stadium, just to the east of the town centre. From 1973 Slough Town played at the Wexham Park Stadium. At the end of the 2002–03 season, financial disagreements with the stadium's owners led to the club's eviction. The Stadium is still in existence, but has since fallen into a state of serious disrepair.

During the next four seasons (2003–04 to 2006–07) the club was based in Windsor, ground-sharing with Windsor & Eton at their Stag Meadow ground.

Since June 2009, Slough Town have been progressing a proposal submitted to Slough Borough Council for permission to build a new stadium within the Borough of Slough. The proposed location for the development is the Arbour Vale school site on Stoke Road, to the north of the town. In addition to a state-of-the-art stadium, the plans include affordable housing and sports fields.[4][5] An artist's impression of the new ground was released in March 2012.[6]

The stadium name will be Arbour Park, with up to 320 seats, meeting FA Regulations.

Preparations are still under way to submit a planning request. It was hoped that the Stadium would be ready by Autumn 2013, so that Slough Town could move back home for the 13/14 season. As of October 2012, a planning application had not been submitted, although Slough Borough Council announced its plan to place the Arbour Park development into the Slough Regeneration Partnership to assist the planning process.[7]

In the 2007–08 season, Slough's first team included several international players – something which is very rare for the level at which STFC are currently playing. Three players, Jermaine Gumbs, Romell Gumbs and Brian Connor, won their second caps for Anguilla in a World Cup qualifying match against El Salvador in March 2008.[8] For the 2009–10 season, the squad included another Anguillan international player, Roy Gumbs. 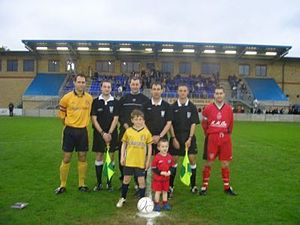 Slough Town vs Hampton & Richmond Borough in the Isthmian League Cup final in 2005.

1. Players that have played/managed in the Football League or any foreign equivalent to this level (i.e. fully professional league).
2. Players with full international caps.
3. Players that hold a club record.