The military history of Slovenia spans less than a hundred years. Following the disintegration of the Austrian-Hungarian Empire at the end of World War I, the Duchy of Styria was divided between the newly established states of German Austria and the State of Slovenes, Croats and Serbs. Rudolf Maister, a Slovene major of the former Austro-Hungarian Army, occupied the town of Maribor in November 1918 and claimed it to the State of Slovenes, Croats and Serbs. After a short fight with German Austrian provisional units, the current border was established, which mostly followed the ethnic-linguistic division between Slovenes and ethnic Germans in Styria.

The current Slovenian Armed Forces are descended from the Slovenian Territorial Defence (Teritorialna Obramba Republike Slovenije; or Slovene TO), formed in 1991 by fusion of Territorial Defence (formed in 1968 as a paramilitary complement to the regular army of the former Yugoslav within the territory of Slovenia) with secret alternative command structure, known as the Manoeuvre Structures of National Protection (Manevrska struktura narodne zaščite, or MSNZ), which was an existing but antiquated institution, (unique to Slovenia), intended to enable the republic to form an ad hoc defence structure, akin to a Home Guard. It was of negligible importance prior to 1990, with antiquated weapons and few members. 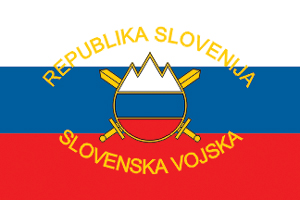 Flag of the Army

A major reorganization of the Slovenian Armed Forces is currently underway[3] with a goal making them more effective and cheaper. More than half of all commands have been disbanded which has made commanding the subordinated units easier and faster. Soldiers are to be located nearer to their homes in order to minimize travel costs. Since the Slovenian Armed Forces do not have enough modern armored vehicles to maintain three motorized battalions fulfilled at every time, one Wheeled Combat Vehicles Company and one Tank Company have been organized within the Logistics brigade, which now lends vehicles to any of four newly formed infantry regiments, regarding to the regiments' needs. Reorganization also transformed 72nd Brigade from a support unit to a combat unit and thus equaled it with the 1st Brigade. Both brigades were added support elements, such as Air Defense, Artillery, Intelligence, etc. The operational units now consist of Special Operations Unit, Naval Division, an Aviation Regiment and three brigades, the 1st (responsible for western Slovenia), 72nd (responsible for eastern Slovenia) and Logistics Brigade. 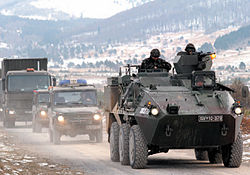 As part of the former Socialist Federal Republic of Yugoslavia, Slovenia was never a member of the Warsaw Pact. Today, the foreign policy priority of NATO membership drives Slovenia's defense reorganization. Once many countries lifted the arms embargo on Slovenia in 1996, the country embarked on a military procurement program to bolster its status as a NATO candidate and to aid its transformation into a mobile force. Active in the SFOR deployment in Bosnia and Herzegovina, Slovenia is also a charter member of Partnership for Peace and a regular participant in PfP exercises. The United States provides bilateral military assistance to Slovenia, including through the International Military Education and Training (IMET) program, the State Partnership Program (aligned with Colorado), and the EUCOM Joint Contact Team Program.

Slovenia formally joined NATO in March 2004.[4] The transition of its armed forces from a primarily conscript-based territorial defense organization to a professional force structure have the ultimate goal of creating NATO-interoperable combat units able to operate on an even par with units from other NATO armies. Implementation of interoperability objectives as determined by the Planning and Review Process (PARP) and the Individual Partnership Program (IPP) as part of Slovenia's PfP participation proceeds. Slovenia's elite units already train with and are integrated into international units including NATO members—for example as part of SFOR and on Cyprus. Its elite mountain troops will be assigned to the Multinational Land Force peacekeeping battalion with Italy, Hungary, and Croatia. Slovenia hosted its first PfP exercise in 1998--"Cooperative Adventure Exchange"—a multinational disaster-preparedness command post exercise involving almost 6,000 troops from 19 NATO and PfP member nations.

Slovenian soldiers are a part of international forces serving in Bosnia and Herzegovina, Kosovo, Afghanistan,[5] Iraq, Chad, Lebanon. They have also served in Cyprus and the Golan Heights as a part of UNFICYP and UNDOF respectively.

Slovenia hosts Multinational Centre of Excellence for Mountain Warfare (MN COEMW; Slovene: Večnacionalni center odličnosti za gorsko bojevanje), one of NATO Centres of Excellence, located in Bohinjska Bela, Slovenia. It is "responsible for training individuals and units for operation in the mountains and other terrains difficult to pass".[6]

The Slovenian Armed Forces are organized as single-branch armed forces with the army as their primary component. The personnel is divided into three categories: 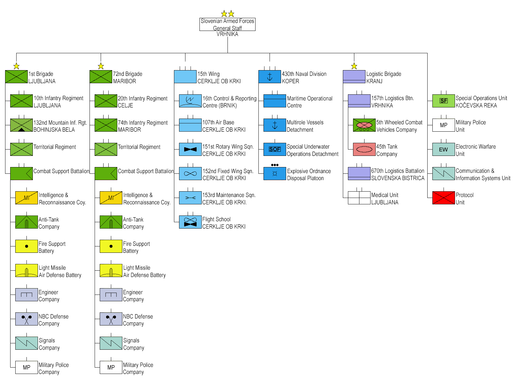 Structure of the Slovenian Armed Forces since 15 May 2013

The others that are partially military are:

Main article: List of Barracks of the Slovenian Armed Forces 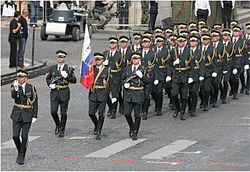 Slovenia is part of NATO and the European Union. The Slovenian Armed Forces have participated and presently participate in many aspects of both organizations.