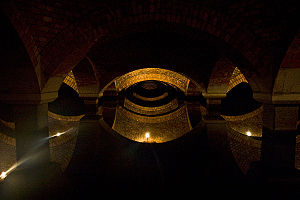 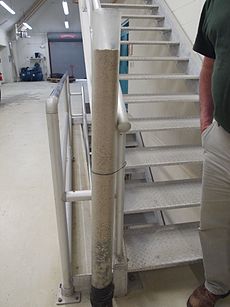 A profile of slow sand filter used in a water purification plant.

Slow sand filters are used in water purification for treating raw water to produce a potable product. They are typically 1 to 2 metres deep, can be rectangular or cylindrical in cross section and are used primarily to treat surface water. The length and breadth of the tanks are determined by the flow rate desired by the filters, which typically have a loading rate of 0.1 to 0.2 metres per hour (or cubic metres per square metre per hour).

Slow sand filters differ from all other filters used to treat drinking water in that they work by using a complex biological film that grows naturally on the surface of the sand. The sand itself does not perform any filtration function but simply acts as a substrate, unlike its counterparts for UV and pressurized treatments. Although they are often the preferred technology in many developing countries because of their low energy requirements and robust performance, they are also used to treat water in some of the most developed countries, such as the UK, where they are used to treat water supplied to London. Slow sand filters now are also being tested for pathogen control of nutrient solutions in hydroponic systems. 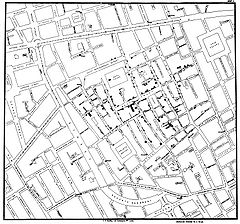 Original map by John Snow showing the clusters of cholera cases in the London epidemic of 1854.

The first documented use of sand filters to purify the water supply dates to 1804, when the owner of a bleachery in Paisley, Scotland, John Gibb, installed an experimental filter, selling his unwanted surplus to the public.[1][2] This method was refined in the following two decades by engineers working for private water companies, and it culminated in the first treated public water supply in the world, installed by engineer James Simpson for the Chelsea Waterworks Company in London in 1829.[3][4] This installation provided filtered water for every resident of the area, and the network design was widely copied throughout the United Kingdom in the ensuing decades.

The practice of water treatment soon became mainstream, and the virtues of the system were made starkly apparent after the investigations of the physician John Snow during the 1854 Broad Street cholera outbreak. Snow was sceptical of the then-dominant miasma theory that stated that diseases were caused by noxious "bad airs". Although the germ theory of disease had not yet been developed, Snow's observations led him to discount the prevailing theory. His 1855 essay On the Mode of Communication of Cholera conclusively demonstrated the role of the water supply in spreading the cholera epidemic in Soho,[5] with the use of a dot distribution map and statistical proof to illustrate the connection between the quality of the water source and cholera cases. His data convinced the local council to disable the water pump, which promptly ended the outbreak.

The Metropolis Water Act introduced the regulation of the water supply companies in London, including minimum standards of water quality for the first time. The Act "made provision for securing the supply to the Metropolis of pure and wholesome water", and required that all water be "effectually filtered" from 31 December 1855.[6] This was followed up with legislation for the mandatory inspection of water quality, including comprehensive chemical analyses, in 1858. This legislation set a worldwide precedent for similar state public health interventions across Europe. The Metropolitan Commission of Sewers was formed at the same time, water filtration was adopted throughout the country, and new water intakes on the Thames were established above Teddington Lock. 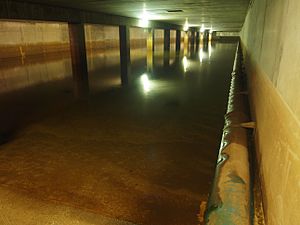 The raw water is let in to the filter room slowly from the pipe on the right. The water will pass through the sand layers down to the bottom of this room. The Schmutzdecke layer can be observed in this picture.

Slow sand filters work through the formation of a gelatinous layer (or biofilm) called the hypogeal layer or Schmutzdecke in the top few millimetres of the fine sand layer. The Schmutzdecke is formed in the first 10–20 days of operation[7] and consists of bacteria, fungi, protozoa, rotifera and a range of aquatic insect larvae. As an epigeal biofilm ages, more algae tend to develop and larger aquatic organisms may be present including some bryozoa, snails and Annelid worms. The surface biofilm is the layer that provides the effective purification in potable water treatment, the underlying sand providing the support medium for this biological treatment layer. As water passes through the hypogeal layer, particles of foreign matter are trapped in the mucilaginous matrix and soluble organic material is adsorbed. The contaminants are metabolised by the bacteria, fungi and protozoa. The water produced from an exemplary slow sand filter is of excellent quality with 90-99% bacterial cell count reduction.[8]

Slow sand filters slowly lose their performance as the biofilm thickens and thereby reduces the rate of flow through the filter. Eventually, it is necessary to refurbish the filter. Two methods are commonly used to do this. In the first, the top few millimetres of fine sand is scraped off to expose a new layer of clean sand. Water is then decanted back into the filter and re-circulated for a few hours to allow a new biofilm to develop. The filter is then filled to full volume and brought back into service.[8] The second method, sometimes called wet harrowing, involves lowering the water level to just above the hypogeal layer, stirring the sand; thus precipitating any solids held in that layer and allowing the remaining water to wash through the sand. The filter column is then filled to full capacity and brought back into service. Wet harrowing can allow the filter to be brought back into service more quickly.[7] 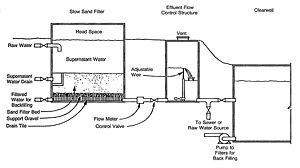 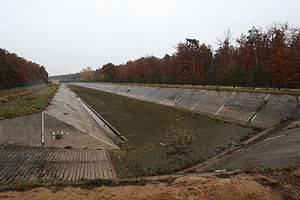 Artificial infiltration works on the principles of slow sand filters

Slow sand filters have a number of unique qualities:

While many municipal water treatment works will have 12 or more beds in use at any one time, smaller communities or households may only have one or two filter beds.

In the base of each bed is a series of herringbone drains that are covered with a layer of pebbles which in turn is covered with coarse gravel. Further layers of sand are placed on top followed by a thick layer of fine sand. The whole depth of filter material may be more than 1 metre in depth, the majority of which will be fine sand material. On top of the sand bed sits a supernatant layer of unpurified water.