From Infogalactic: the planetary knowledge core
Jump to: navigation, search
For the Swedish National Area (Riksområde), see Småland and the islands.

listen)) is a historical province (landskap) in southern Sweden. Småland borders Blekinge, Scania (Swedish: Skåne), Halland, Västergötland, Östergötland and the island Öland in the Baltic Sea. The name Småland literally means Small Lands.[2] The Latinized form Smolandia has been used in other languages. The highest point in Småland is Tomtabacken, at 377 metres (1,237 ft).

The traditional provinces of Sweden serve no administrative or political purposes, but are historical and cultural entities. The province is divided into the three administrative counties: Jönköping County, Kalmar County and Kronoberg County, which roughly cover the entire Småland province. Smaller areas of Småland, however, are situated in Halland County and Östergötland County.

The current coat of arms, granted in 1569, features a rampant red lion on a golden shield carrying a crossbow. The arms may appear with a ducal coronet. Blazon: "Or a lion rampant Gules langued and armed Azure holding in front paws a Crossbow of the second bowed and stringed Sable with a bolt Argent." 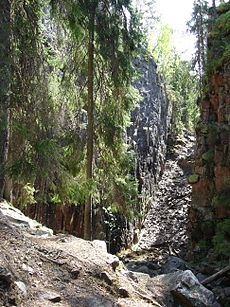 An image from a canyon in the forested Småland.

The geography is dominated by a forested high plain where the soil is mixed with sand and small boulders, making it barren in all except the coastal areas, and unsuited for agriculture except in certain locations, notably the Kalmar Plains. The province is rich in lakes and bogs. The coast consists of an archipelago of islands and bays in the north and cultivated flatlands in the south. In total, cultivated land covers 14%, meadows 7% and forest 50%.[3]

Largest towns are Jönköping in the north-west, Växjö in the south, and Kalmar on the east coast near Öland Island.

The climate of Småland is divided between the oceanic climate of coastal areas such as Kalmar[4] and the humid continental climate of the interior higher areas such as Jönköping.[5] Southern interior areas such as Växjö have similar oceanic climates such as the coastline.[6] However, temperature average differences between areas are relatively small, since Småland lies in the continental/oceanic transition zone. Summer daytime averages are similar throughout the province, since according to Weatherbase all three major urban areas are on average around 21 °C (70 °F) with daytime winter temperatures hovering around the freezing point. The slightly colder nights averaging −5 °C (23 °F) in Jönköping are rendering its continental classification.[7] The locality of Målilla has the Swedish and Scandinavian all-time highest-measured temperature with 38 °C (100 °F) on June 1, 1947.[8]

The area was probably populated in the Stone Age from the south, by people moving along the coast up to Kalmar. Småland was populated by Stone Age peoples by at least 6000 BC, since the Alby People are known to have crossed the ice bridge across the Kalmar Strait at that time.

The name Småland ("small lands") comes from the fact that it was a combination of several independent lands, Kinda (today a part of Östergötland), Tveta, Vista, Vedbo, Tjust, Sevede, Aspeland, Handbörd, Möre, Värend, Finnveden and Njudung. Every small land had its own law in the Viking age and early middle age and could declare themselves neutral in wars Sweden was involved in, at least if the King had no army present at the parliamentary debate. Around 1350, in the reign of king Magnus Eriksson, the first national law code was introduced in Sweden, and the historic provinces lost much of their old autonomy.

The city of Kalmar is one of the oldest cities of Sweden, and in the medieval age it was the southernmost and the third largest city in Sweden, when it was a center for export of iron, which, in many cases, was handled by German merchants. At the time, Scania and Blekinge were not parts of Sweden.

Småland was the center of several peasant rebellions. The one closest to being successful was Dackefejden led by Nils Dacke in 1542–1543. When officials of king Gustav Vasa were assaulted and murdered, the king sent small expeditions to pacify the area, but all failed. Dacke was in reality the ruler of large parts of Småland during the winter, though heavily troubled by a blockade of supplies, before finally being defeated by larger forces attacking from both Västergötland and Östergötland. Dacke held a famous battle defence at the (now ruined) Kronoberg Castle, and was shot while trying to escape to then Danish-ruled Blekinge.

A geographical part of Småland called Kingdom of Crystal is known for its many glassworks and can be historically traced back to the 18th century. 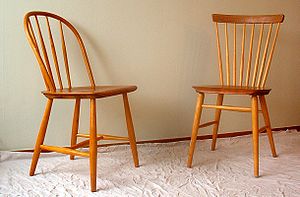 In the 19th century, Småland was characterized by poverty, and had a substantial emigration to North America, which additionally hampered its development. The majority of emigrants ended up in Minnesota, with a geography resembling Sweden, combining arable land with forest and lakes. Many came to Texas, recruited by Swante M. Swenson, a wealthy Texas magnate and friend of Sam Houston.

The well known furniture company IKEA was founded in the Småland town of Älmhult.

Overnight between 8 and 9 January 2005 the province suffered serious damage from the storm Gudrun. 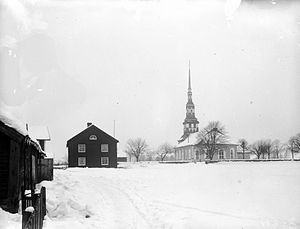 Compared to much of Sweden, Småland has a higher level of religious intensity and church participation.

In terms of Lutheran ecclesiastical boundaries, most of the province encompasses the diocese of Växjö. Parts of northern Småland are in the diocese of Linköping.

Politically Småland is the strongest province for Kristdemokraterna (the Swedish Christian Democratic Party), and both of the last two leaders of the party - Göran Hägglund and Alf Svensson live in Jönköping Municipality in northern Småland. 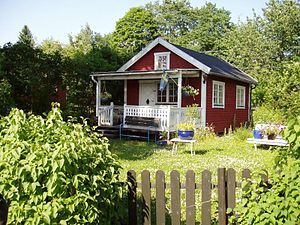 Farmhouses in Småland are typically red with white corners.

The Swedish botanist Carolus Linnaeus, sw. Carl von Linné (1707–1778), often called the father of taxonomy or "The flower-king", was born in Älmhult in Småland. He gave the twinflower its Latin name based on his own (Latin: Linnaea borealis), because of his particular fondness of it. The flower has become Småland's provincial flower.

Another notable person from Älmhult is Ingvar Kamprad, the founder of the global concern IKEA. The name "Småland" is used as the name of the children's play areas at some IKEA stores.

Småland is home to Jönköping University, located in Jönköping.

The Swedish emigration to North America during the 19th century, is best depicted in a suite of novels by author Vilhelm Moberg, which is also the basis for the musical Kristina from Duvemåla created by Benny Andersson and Björn Ulvaeus of ABBA fame.

In her writing, children's book author Astrid Lindgren often portrayed scenes from her own childhood, growing up on a farm in Småland.

In the 20th century, Småland has been known for its high level of entrepreneurship and low unemployment, especially in the Gnosjö region.

the Smålandian is by nature awake and smart, diligent and hard-working, yet compliant, cunning and crafty, which gives him the advantage of being able to move through life with little means. [9]

A running joke local to Sweden, is that Smålandians are very economical, ranging from modestly frugal to utterly cheap. Ingvar Kamprad said that the Smålandian are seen as the Scotsmen of Sweden.[10]

The local language is a Swedish dialect known as Småländska (Smalandian). This may in turn be separated in two main branches, with the northern related to the Götaland dialects and the southern to the Scanian dialects[citation needed].

For details, see: Districts of Småland 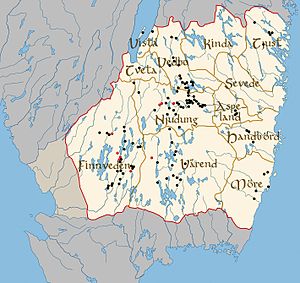 After the unification of Sweden, around 800–1200 AD, Småland was for consistency divided into chartered cities and into hundreds.

The historical sub-divisions of all Sweden's provinces were through hundreds (Swedish: härad). These were Småland's hundreds:

Football in the province is administered by Smålands Fotbollförbund.