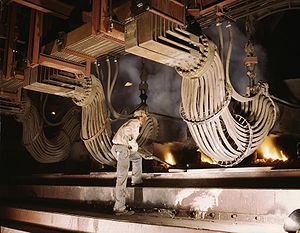 Smelting is a form of extractive metallurgy; its main use is to produce a base metal from its ore. This includes production of silver, iron, copper and other base metals from their ores. Smelting makes use of heat and a chemical reducing agent to decompose the ore, driving off other elements as gases or slag and leaving just the metal base behind. The reducing agent is commonly a source of carbon such as coke, or in earlier times charcoal. The carbon (or carbon monoxide derived from it) removes oxygen from the ore, leaving behind the elemental metal. The carbon is thus oxidized in two stages, producing first carbon monoxide and then carbon dioxide. As most ores are impure, it is often necessary to use flux, such as limestone, to remove the accompanying rock gangue as slag.

Plants for the electrolytic reduction of aluminium are also generally referred to as aluminium smelters.

Smelting involves more than just melting the metal out of its ore. Most ores are a chemical compound of the metal with other elements, such as oxygen (as an oxide), sulfur (as a sulfide) or carbon and oxygen together (as a carbonate). To produce the metal, these compounds have to undergo a chemical reaction. Smelting therefore consists of using suitable reducing substances that will combine with those oxidizing elements to free the metal.

In the case of carbonates and sulfides, a process called "roasting" drives out the unwanted carbon or sulfur, leaving an oxide, which can be directly reduced. Roasting is usually carried out in an oxidizing environment. A few practical examples:

Reduction is the final, high-temperature step in smelting. It is here that the oxide becomes the elemental metal. A reducing environment (often provided by carbon monoxide, made by incomplete combustion, produced in an air-starved furnace) pulls the final oxygen atoms from the raw metal. The required temperature varies over a very large range, both in absolute terms and in terms of the melting point of the base metal. A few examples:

Flux and slag can provide a secondary service after the reduction step is complete: They provide a molten cover on the purified metal, preventing it from coming into contact with oxygen while it is still hot enough to oxidize readily.

Fluxes are used in smelting for several purposes, chief among them catalyzing the desired reactions and chemically binding to unwanted impurities or reaction products. Calcium oxide, in the form of lime, was often used for this purpose, since it could react with the carbon dioxide and sulfur dioxide produced during roasting and smelting to keep them out of the working environment.

Of the seven metals known in antiquity only gold occurred regularly in native form in the natural environment. The others – copper, lead, silver, tin, iron and mercury – occur primarily as minerals, though copper is occasionally found in its native state in commercially significant quantities. These minerals are primarily carbonates, sulfides, or oxides of the metal, mixed with other components such as silica and alumina. Roasting the carbonate and sulfide minerals in air converts them to oxides. The oxides, in turn, are smelted into the metal. Carbon monoxide was (and is) the reducing agent of choice for smelting. It is easily produced during the heating process, and as a gas comes into intimate contact with the ore.

In the Old World, humans learned to smelt metals in prehistoric times, more than 8000 years ago. The discovery and use of the "useful" metals — copper and bronze at first, then iron a few millennia later — had an enormous impact on human society. The impact was so pervasive that scholars traditionally divide ancient history into Stone Age, Bronze Age, and Iron Age.

In the Americas, pre-Inca civilizations of the central Andes in Peru had mastered the smelting of copper and silver at least six centuries before the first Europeans arrived in the 16th century.[3]

In the Old World, the first metals smelted were tin and lead. The earliest known cast lead beads were found in the Çatal Höyük site in Anatolia (Turkey), and dated from about 6500 BC, but the metal may have been known earlier.

Since the discovery happened several millennia before the invention of writing, there is no written record about how it was made. However, tin and lead can be smelted by placing the ores in a wood fire, leaving the possibility that the discovery may have occurred by accident.

Although lead is a common metal, its discovery had relatively little impact in the ancient world. It is too soft to be used for structural elements or weapons, except for the fact that it is exceptionally dense, making it ideal for sling projectiles. However, being easy to cast and shape, it came to be extensively used in the classical world of Ancient Greece and Ancient Rome for piping and storage of water. It was also used as a mortar in stone buildings.

Tin was much less common than lead and is only marginally harder, and had even less impact by itself.

After tin and lead, the next metal to be smelted appears to have been copper. How the discovery came about is a matter of much debate. Campfires are about 200 °C short of the temperature needed for that, so it has been conjectured that the first smelting of copper may have been achieved in pottery kilns. The development of copper smelting in the Andes, which is believed to have occurred independently of that in the Old World, may have occurred in the same way.[3] The earliest current evidence of copper smelting, dating from between 5500 BC and 5000 BC, has been found in Pločnik and Belovode, Serbia.[4][5] A mace head found in Can Hasan, Turkey and dated to 5000 BC, once thought to be the oldest evidence, now appears to be hammered native copper.[6]

By combining copper with tin and/or arsenic in the right proportions one obtains bronze, an alloy which is significantly harder than copper. The first copper/arsenic bronzes date from 4200 BC from Asia Minor. The Inca bronze alloys were also of this type. Arsenic is often an impurity in copper ores, so the discovery could have been made by accident; but eventually arsenic-bearing minerals were intentionally added during smelting.[citation needed]

Copper–tin bronzes, harder and more durable, were developed around 3200 BC, also in Asia Minor.[citation needed]

The process through which the smiths learned to produce copper/tin bronzes is once again a mystery. The first such bronzes were probably a lucky accident from tin contamination of copper ores, but by 2000 BC, we know that tin was being mined on purpose for the production of bronze. This is amazing, given that tin is a semi-rare metal, and even a rich cassiterite ore only has 5% tin. Also, it takes special skills (or special instruments) to find it and to locate the richer lodes. But, whatever steps were taken to learn about tin, these were fully understood by 2000 BC.

The discovery of copper and bronze manufacture had a significant impact on the history of the Old World. Metals were hard enough to make weapons that were heavier, stronger, and more resistant to impact-related damage than their wood, bone, or stone equivalents. For several millennia, bronze was the material of choice for weapons such as swords, daggers, battle axes, and spear and arrow points, as well as protective gear such as shields, helmets, greaves (metal shin guards), and other body armor. Bronze also supplanted stone, wood, and organic materials in all sorts of tools and household utensils, such as chisels, saws, adzes, nails, blade shears, knives, sewing needles and pins, jugs, cooking pots and cauldrons, mirrors, horse harnesses, and much more.[citation needed] Tin and copper also contributed to the establishment of trade networks spanning large areas of Europe and Asia, and had a major effect on the distribution of wealth among individuals and nations.[citation needed] 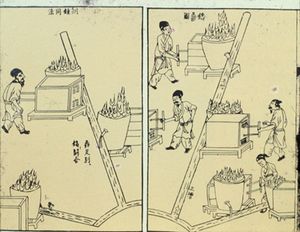 Where and how iron smelting was discovered is widely debated, and remains uncertain due to the significant lack of production finds. Nevertheless, there is some consensus[citation needed] that iron technology originated in the Near East, perhaps in Eastern Anatolia.

In Ancient Egypt, somewhere between the Third Intermediate Period and 23rd Dynasty (ca. 1100–750 BC), there are indications of iron working. Significantly though, no evidence for the smelting of iron from ore has been attested to Egypt in any (pre-modern) period. There is a further possibility of iron smelting and working in West Africa by 1200 BC.[7] In addition, very early instances of carbon steel were found to be in production around 2000 years before the present in northwest Tanzania, based on complex preheating principles. These discoveries are significant for the history of metallurgy.[8]

Most early processes in Europe and Africa involved smelting iron ore in a bloomery, where the temperature is kept low enough so that the iron does not melt. This produces a spongy mass of iron called a bloom, which then has to be consolidated with a hammer. The earliest evidence to date for the bloomery smelting of iron is found at Tell Hammeh, Jordan (see also external link), and dates to 930 BC (C14 dating).

From the medieval period, the process of direct reduction in bloomeries began to be replaced by an indirect process. In this, a blast furnace was used to make pig iron, which then had to undergo a further process to make forgeable bar iron. Processes for the second stage include fining in a finery forge and, from the Industrial Revolution, puddling. However both processes are now obsolete, and wrought iron is now hardly made. Instead, mild steel is produced from a bessemer converter or by other means including smelting reduction processes such as the Corex Process. 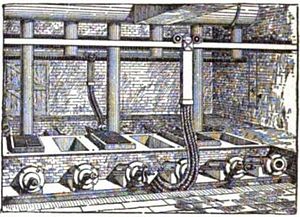 Cowles Syndicate of Ohio in Stoke-upon-Trent England, late 1880s. British Aluminium used the process of Paul Héroult about this time.[9]

The ores of base metals are often sulfides. In recent centuries, reverberatory furnaces have been used. These keep the fuel and the charge being smelted separate. Traditionally these were used for carrying out the first step: formation of two liquids, one an oxide slag containing most of the impurity elements, and the other a sulfide matte containing the valuable metal sulfide and some impurities. Such "reverb" furnaces are today about 40 m long, 3 m high and 10 m wide. Fuel is burned at one end and the heat melts the dry sulfide concentrates (usually after partial roasting), which are fed through the openings in the roof of the furnace. The slag floats on top of the heavier matte, and is removed and discarded or recycled. The sulfide matte is then sent to the converter. The precise details of the process will vary from one furnace to another depending on the mineralogy of the orebody from which the concentrate originates.

While reverberatory furnaces were very good at producing slags containing very little copper, they were relatively energy inefficient and produced a low concentration of sulfur dioxide in their off-gases that made it difficult to capture, and consequently, they have been supplanted by a new generation of copper smelting technologies.[10] More recent furnaces have been designed based upon bath smelting, top jetting lance smelting, flash smelting and blast furnaces. Some examples of bath smelters include the Noranda furnace, the Isasmelt furnace, the Teniente reactor, the Vunyukov smelter and the SKS technology to name a few. Top jetting lance smelters include the Mitsubishi smelting reactor. Flash smelters account for over 50% of the world's copper smelters. There are many more varieties of smelting processes, including the Kivset, Ausmelt, Tamano, EAF, and BF.