They are notable for producing the first edition of the Dictionary of National Biography (DNB).

The firm achieved its first major success with the publication of Charlotte Brontë's Jane Eyre in 1847, under the pseudonym of "Currer Bell." 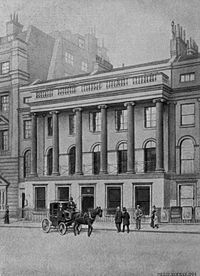 The offices of Smith, Elder & Co. at No. 15 Waterloo Place in London