The Smithsonian Institution (/smɪθˈsoʊniən/ smith-SOE-nee-ən), established in 1846 "for the increase and diffusion of knowledge," is a group of museums and research centers administered by the Government of the United States.[1] Originally organized as the "United States National Museum," that name ceased to exist as an administrative entity in 1967.[2] Termed "the nation's attic"[3] for its eclectic holdings of 138 million items,[4] the Institution's nineteen museums, nine research centers, and zoo include historical and architectural landmarks, mostly located in the District of Columbia.[5] Additional facilities are located in Arizona, Maryland, Massachusetts, New York City, Virginia, and Panama. A further 170 museums are Smithsonian Affiliates.[6] The Institution's thirty million annual visitors[7] are admitted without charge. Funding comes from the Institution's endowment, private and corporate contributions, membership dues, government support, as well as retail, concession and licensing revenues.[4] Institution publications include Smithsonian and Air & Space magazines. 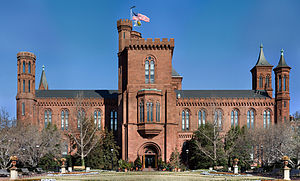 The "Castle" (1847), the Institution's first building and still its headquarters

British scientist James Smithson (d. 1829) left most of his wealth to his nephew Henry James Hungerford. When Hungerford died childless in 1835,[8] the estate passed "to the United States of America, to found at Washington, under the name of the Smithsonian Institution, an Establishment for the increase & diffusion of knowledge among men", in accordance with Smithson's will.[9] Congress officially accepted the legacy bequeathed to the nation, and pledged the faith of the United States to the charitable trust on July 1, 1836.[10] The American diplomat Richard Rush was dispatched to England by President Andrew Jackson to collect the bequest. Rush returned in August 1838 with 105 sacks containing 104,960 gold sovereigns (about $500,000 at the time, which is equivalent to $11,111,000 in 2019).[11][12]

Once the money was in hand, eight years of Congressional haggling ensued over how to interpret Smithson's rather vague mandate "for the increase and diffusion of knowledge."[10][12] Unfortunately the money was invested by the US Treasury in bonds issued by the state of Arkansas which soon defaulted. After heated debate, Massachusetts Representative (and ex-President) John Quincy Adams persuaded Congress to restore the lost funds with interest[13] and, despite designs on the money for other purposes, convinced his colleagues to preserve it for an institution of science and learning.[14] Finally, on August 10, 1846, President James K. Polk signed the legislation that established the Smithsonian Institution as a trust instrumentality of the United States, to be administered by a Board of Regents and a Secretary of the Smithsonian.[10]

Though the Smithsonian's first Secretary, Joseph Henry, wanted the Institution to be a center for scientific research,[15] it also became the depository for various Washington and U.S. government collections.[16] The United States Exploring Expedition by the U.S. Navy circumnavigated the globe between 1838 and 1842.[17] The voyage amassed thousands of animal specimens, an herbarium of 50,000 plant specimens, and diverse shells and minerals, tropical birds, jars of seawater, and ethnographic artifacts from the South Pacific Ocean.[17] These specimens and artifacts became part of the Smithsonian collections, as did those collected by several military and civilian surveys of the American West, including the Mexican Boundary Survey and Pacific Railroad Surveys, which assembled many Native American artifacts and natural history specimens.[18]

In 1846, the regents developed a plan for weather observation, and in 1847, money was appropriated for meteorological research.[19] The Institution became a magnet for young scientists from 1857 to 1866, who formed a group called the Megatherium Club.[20]

The Smithsonian played a critical role as the U.S. partner institution in early bilateral scientific exchanges with the Academy of Sciences of Cuba.[21]

When the Detroit philanthropist Charles Lang Freer donated his private collection to the Smithsonian and funds to build the museum to hold it (which was named the Freer Gallery), it was among the Smithsonian's first major donations from a private individual.[22] The gallery opened in 1923.[23]

In 2011, the Smithsonian undertook its first-ever capital fundraising campaign.[24] The $1.5 billion effort raised $1 billion at the three-year mark. Smithsonian officials made the campaign public in October 2014 in an effort to raise the remaining $500 million. More than 60,000 individuals and organizations donated money to the campaign by the time it went public.[25] This included 192 gifts of at least $1 million.[25] Members of the boards of directors of various Smithsonian museums donated $372 million.[25] The Smithsonian said that funds raised will go toward completion of the National Museum of African American History and Culture building, and renovations of the National Air and Space Museum, National Museum of American History, and the Renwick Gallery.[25] A smaller amount of funds will go to educational initiatives and digitization of collections.[25] 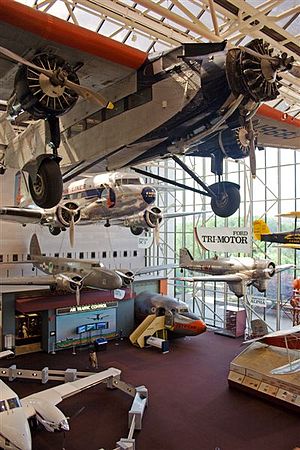 Aircraft on display at the National Air and Space Museum, including a Ford Trimotor and Douglas DC-3 (top and second from top)

Nineteen museums and galleries, as well as the National Zoological Park, comprise the Smithsonian museums.[26] Eleven are on the National Mall, the strip of land that runs between the Lincoln Memorial and the United States Capitol. Other museums are located elsewhere in Washington, D.C., with two more in New York City and one in Chantilly, Virginia.

The Smithsonian Institution announced in January 2015 that it is in talks to build its first permanent overseas exhibition space within London's Queen Elizabeth II Olympic Park.[27]

Smithsonian collections include 138 million artworks, artifacts and specimens. The National Museum of Natural History houses 127 million of these specimens and artifacts. The Collections Search Center has 9 million digital records available online. The Smithsonian Institution Libraries hold 2 million library volumes. Smithsonian Archives hold 156,830 cubic feet of archival material.[28] The Smithsonian Institution has different categories of collection displays that you can visit at the museum such as its Historical collections. In 1912 The First Lady Helen Herron Taft had donated her gown to the museum for the First Ladies' Gown display. The museum also has on display for its visitors treasures such as the Star-Spangled Banner, and the Stove pipe hat that was worn by President Lincoln. They also have the Ruby slippers worn by Judy Garland in "The Wizard Of Oz." The institution also has the original Teddy Bear that was named after President Theodore Roosevelt. [1]

The following is a list of Smithsonian research centers, with their affiliated museum in parentheses:

Also of note is the Smithsonian Museum Support Center (MSC), located in Silver Hill, Maryland (Suitland), which is the principal off-site conservation and collections facility for multiple Smithsonian museums, primarily the National Museum of Natural History. The MSC was dedicated in May 1983.[32] The MSC covers 4.5 acres (1.8 ha) of land, with over 500,000 square feet (46,000 m2) of space, making it one of the largest set of structures in the Smithsonian. It has over 12 miles (19 km) of cabinets, and more than 31 million objects. 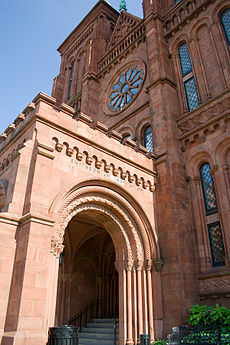 The Smithsonian Institution was established as a trust instrumentality by act of Congress.[36] More than two-thirds of the Smithsonian's workforce of some 6,300 persons are employees of the federal government. The Smithsonian Office of Protection Services oversees security at the Smithsonian facilities and enforces laws and regulations for National Capital Parks together with the United States Park Police.

The President's 2011 budget proposed just under $800 million in support for the Smithsonian, slightly increased from previous years. Institution exhibits are free of charge, though in 2010 the Deficit Commission recommended admission fees.[37][38]

As approved by Congress on August 10, 1846, the legislation that created the Smithsonian Institution called for the creation of a Board of Regents to govern and administer the organization.[36] This 17-member board meets at least four times a year and includes as ex officio members the Chief Justice of the United States and the Vice President of the United States. The nominal head of the Institution is the Chancellor, an office which has traditionally been held by the Chief Justice. In September 2007, the Board created the position of Chair of the Board of Regents, a position currently held by John W. McCarter of Illinois.[39]

Other members of the Board of Regents are three members of the U.S. House of Representatives appointed by the Speaker of the House; three members of the Senate, appointed by the President pro tempore of the Senate; and nine citizen members, nominated by the Board and approved by the Congress in a joint resolution signed by the President of the United States.[40] Regents who are senators or representatives serve for the duration of their elected terms, while citizen Regents serve a maximum of two six-year terms. Regents are compensated on a part-time basis.

On March 10, 2014, the Smithsonian Board of Directors selected Dr. David Skorton, a physician and president of Cornell University as the 13th Secretary of the Smithsonian. Skorton took the reins of the institution on 1 July 2015.[42]

On August 15, 2013, the curator of mammals at the Smithsonian National Museum of Natural History, Kristofer Helgen, announced the discovery of a new carnivorous mammal olinguito (pronounced oh-lin-GHEE-toe). The find was the first of its kind in 35 years.[43]

Secretaries of the Smithsonian Institution

In 1995, controversy arose over the exhibit at the National Air and Space Museum associated with display of the Enola Gay, the Superfortress used by the United States to execute the first atomic bombing in World War II. The American Legion and Air Force Association believed the exhibit put forward only one side of the debate over the atomic bombings of Hiroshima and Nagasaki, and that it emphasized the effect on the victims without the overall context of the war. The Smithsonian changed the exhibit, displaying the aircraft only with associated technical data and without discussion of its historic role in the war.

Censorship of "Seasons of Life and Land"

In 2003, a National Museum of Natural History exhibit, Subhankar Banerjee's Seasons of Life and Land, featuring photographs of the Arctic National Wildlife Refuge, was censored and moved to the basement by Smithsonian officials because they feared that its subject matter was too politically controversial.[44]

In November 2007, The Washington Post reported internal criticism has been raised regarding the institution's handling of the exhibit on the Arctic. According to documents and e-mails, the exhibit and its associated presentation were edited at high levels to add "scientific uncertainty" regarding the nature and impact of global warming on the Arctic. Acting Secretary of the Smithsonian Cristián Samper was interviewed by the Post, and claimed the exhibit was edited because it contained conclusions that went beyond what could be proven by contemporary climatology.[45] The Smithsonian is now a participant in the U.S. Global Change Research Program.[46]

The Smithsonian Institution provides access to its image collections for educational, scholarly and nonprofit uses. Commercial uses are generally restricted unless permission is obtained. Smithsonian images fall into different copyright categories; some are protected by copyright, many are subject to license agreements or other contractual conditions, and some fall into the public domain, such as those prepared by Smithsonian employees as part of their official duties. The Smithsonian's terms of use for its digital content, including images, are set forth on the Smithsonian Web site.[47][48]

In April 2006, the institution entered into an agreement of "first refusal" rights for its vast silent and public domain film archives with Showtime Networks, mainly for use on the Smithsonian Channel, a network created from this deal. Critics contend this agreement effectively gives Showtime control over the film archives, as it requires filmmakers to obtain permission from the network to use extensive amounts of film footage from the Smithsonian archives.[49]

The Smithsonian contends independent producers continue to have unchanged access to the institution and its collections as they had prior to the agreement.[citation needed] The process to gain access to film at the Smithsonian remains the same. Since January 2006, independent producers have made more than 500 requests to film in the museums and collections, and/or to use archival footage and photos.[citation needed]

According to Yale Scientific, although the Smithsonian Institution included Nikola Tesla's alternating current generators in an exhibit, no mention is made of Tesla. The generator is misleadingly included as part of the Thomas Edison exhibit.[50]