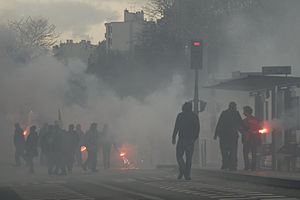 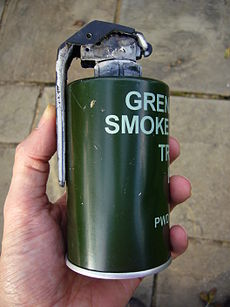 British L83A1 Smoke Grenade manufactured in May 2008. This grenade has already been used.

A smoke grenade is a canister-type grenade used as a signaling device, target or landing zone marking device, or as a screening device for unit movements. 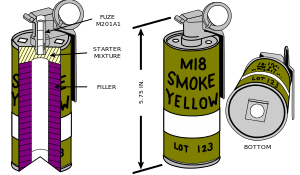 Diagram and cross section of an AN M18 smoke grenade

Typical design consists of a sheet steel cylinder with four emission holes on top and one on the bottom to allow smoke release when the grenade is ignited. The filler consists of 250 to 350 grams of colored (red, green, orange, gray, yellow, blue, white, black, or violet) smoke composition (mostly potassium chlorate, lactose, and a dye). The reaction is exothermic and though they remain intact, smoke grenade casings will often remain scalding hot for some time even after the grenade is no longer emitting smoke. Although modern smoke grenades are designed not to directly emit fire or sparks, they remain a fire hazard and are capable of igniting dry vegetation or flammable substances if used injudiciously.

Another type of smoke grenade is the bursting variation. These are filled with white phosphorus (WP), a pyrophoric agent which is spread quickly into a cloud by an internal bursting charge. White phosphorus burns with a brilliant yellow flame, while producing copious amounts of white smoke (phosphorus pentoxide). This type of smoke grenade is favored for its ability to produce a very dense and nearly instantaneous cloud of white concealment smoke as compared to the more common solid-filler grenades which expel a slower stream of smoke over a period of roughly 1 minute. For this reason they are favored for use in onboard grenade launching attachments on armored vehicles, which require extremely fast concealment in the event they are targeted by laser guided anti-tank missiles and need to rapidly retreat. However, due to their explosive nature and extremely toxic and hazardous filler, this type of smoke grenade is never hand-thrown. 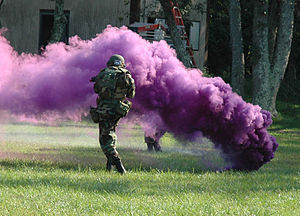 A violet smoke grenade being used during a military training exercise

Smoke grenades are used for several purposes. The primary use is the creation of smoke screens for concealment and the signalling of aircraft.

If movement (such as flanking maneuvers or retreat) is necessary, smoke grenades can be thrown prior to movement in order to provide a wall of visual distraction that reduces the accuracy of enemy fire and temporarily deceives them as to the force's location. The most common color for concealment smoke is white or grey. With the advent of infrared imaging goggles which can spot troop movements through smoke screens, the newest smoke compositions now include a "multi-spectrum" component to make them IR impermeable.

Smoke grenades can also be used to signal aircraft. Since locating a target from above (especially in thick forest canopy) can be nearly impossible, even with good radio contact, colored smoke grenades are often used to allow aircraft to spot them. Colored signalling smoke grenades are widely used in CASEVAC and close air support situations where quickly locating friendly ground forces is of paramount importance. Common colors are red, yellow, green and purple, and all use very brightly colored dyes to increase the likelihood of being spotted from above. 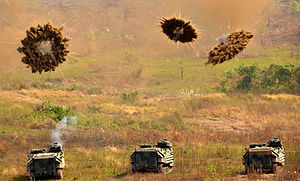 Smoke grenades are functionally identical to many forms of chemical grenades (such as CS gas riot control grenades) and incendiary grenades (such as thermite grenades) which use a fuse to ignite a solid filler inside a steel canister, which then slowly propels the combustion products out through holes in the canister as the contents burn. However, the smoke grenade class is restricted to signalling and concealment under the laws of war, and thus they are not considered weapons; since the vast majority are non-explosive, they remain legal for civilian use and ownership in most countries.

Since the basic design of a smoke grenade (a metal canister containing a substance that burns and expels smoke when ignited) is so simple, improvised devices are ubiquitous across the world. Protestors, football spectators, and airsoft enthusiasts often create their own smoke grenades using common materials.