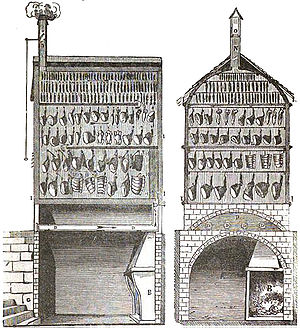 Smoked meat is a method of preparing red meat (and fish) which originates in prehistory. Its purpose is to preserve these protein-rich foods, which would otherwise spoil quickly, for long periods. There are two mechanisms for this preservation: dehydration and the antibacterial properties of phenols and other chemicals in the absorbed smoke. In modern days, the enhanced flavor of smoked foods makes them a delicacy in many cultures. 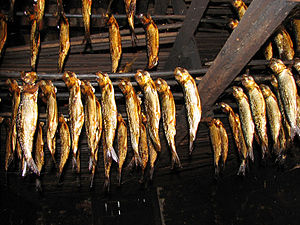 Smoked fish in a smoking oven

Smoking of meat and fish has been practiced for ages. Indigenous cultures around the world may have used smoke during the drying of fish to drive away the flies. They soon found that the absorbed smoke acted as a preservative. Perhaps the most famous "smokers of meat" were the Caribbean natives who smoked it on a rack over a smoky fire, a setup they called "barbacoa" (one possible etymological origin of barbecue). 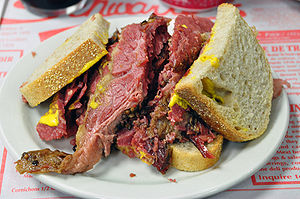 Along with bagels, smoked meat has been popular in Montreal since the nineteenth century, and has taken such strong root in that city that many Montrealers, and even many non-Montrealers, identify it as emblematic of the city's cuisine. Current and former residents and tourists make a point of visiting Montreal's best-known smoked meat establishments such as Schwartz's, Main Deli Steak House, Lester's Deli, Roi du Smoked Meat (Smoked Meat King), Abie's, Snowdon Deli, Smoked Meat Pete's, even taking whole briskets away as take-out.

Warm Montreal smoked meat is always sliced by hand in order to maintain its form since doing so with a meat slicer would cause the tender meat to disintegrate. Whole briskets are kept steaming and sliced up on demand when ordered in the restaurant.

Famous among early smokers of meat are the Ashkenazi Jewish communities in Europe, and is often associated with other foods popularized by Jewish communities, such as bagels. In the United States it is referred to as pastrami, which is derived from the Yiddish: פא סטראמע‎ (pronounced pastrómeh). However, lovers of pastrami vociferously argue that the consistency, flavoring, seasoning and color of pastrami differs significantly from that of smoked meat. Pastrami comes in two flavors-"old fashioned" which is a process where the meat is naturally aged or cured and "regular" a process whereby additives are used to age the meat. Both the dish and the word were brought to North America with the wave of Jewish immigration from Bessarabia and Romania in the second half of the 19th century; it is similar to roast brisket, a signature dish of the local Jewish cuisine of these regions. Smoked meat, also known as salt beef in London, is cured, spiced, and flavoured in ways similar to corned beef. Difference in meat cut and spicing mean that smoked meat's taste is different from either of these, and even varies among recipes.

Smoke meats from the southern United States, also known as Barbecue or BBQ were developed to use the "cheaper" cuts of meats, as they were typically tough and deemed "undesirable". The "low and slow" cooking methods tenderized the connective tissues in the meat and made these cuts a sought after delicacy . Usually done in a "low temp" environment (200 °F to 300 °F) (93 °C to 149 °C), they take a significant amount of time to prepare, which breaks down the connective tissues and collagens within the meat, and renders out the fat. A sub-category is the plethora of sauces and "mops" that are used to flavor and further tenderize the meats. BBQ has become a culinary art form, and hundreds of competitions are held yearly. In the Southeast, pulled pork and pork ribs are the most common smoked meat, while brisket, beef ribs, and sausage are most popular in Texas and the central south. Chicken is also smoked throughout.

One study has shown a positive correlation between the frequency of consumption of smoked foods and intestinal cancer.[1] However, the study was restricted to a small Slovenian population in Hungary, where the local smoke curing process produces levels of contaminants roughly eight times as high as standard processes elsewhere.[2] Smoked meats have the potential for promoting the growth of Listeria bacteria. Listeria monocytogenes can also cause serious infection in an infant and pregnant woman and can be transmitted link to her infant in utero or after birth. The infection has the potential of seriously harming or even causing the death of a preterm infant, an infant of low or very low birth weight, or an infant with an immune system deficiency or a congenital defect of the immune system. The presence of this pathogen can sometimes be determined by the symptoms that appear as a gastrointestinal illness in the mother. The mother can also acquire infection from ingesting food that contains other animal products such as, unpasteurized milk, hot dogs, and cheese.[3]