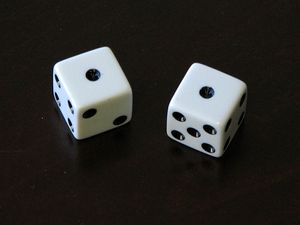 In gambling, snake eyes is the outcome of rolling the dice in a game and getting only one pip on each die. The pair of pips resembles a pair of eyes, which is appended to the term 'snake' because of the long-standing association of this word with treachery and betrayal. The dictionary of etymology traces that use of the term back to 1929,[1] although it may be traced all the way back to the ancient Roman dice games, where 'Dogs' represented two ones. They referred to this as "the dog throw". In modern parlance, it refers to such a roll in any game involving dice.

Because this is the lowest possible roll, and will often be a loser in many dice games, such as Craps, the term has been employed in a more general usage as a reference to bad luck.

The odds of rolling snake eyes on two six-sided dice are 1-in-36. In some board games, such as Monopoly, house rules may decide that this roll earns the player a bonus due to it being rare and otherwise disadvantageous.[2]