Snetterton Circuit is a motor racing course in Norfolk, England, originally opened in 1953. Owned by MotorSport Vision, it is situated on the A11 road 12 miles (19 km) north-east of the town of Thetford and 19 miles (31 km) south-west of the city of Norwich. The circuit is named after the nearby village of Snetterton to the north-west of the circuit, although much of the circuit lies in the adjoining civil parish of Quidenham.[3]

The circuit hosts races from series including the British Touring Car Championship, British Formula Three Championship and British Superbike Championship. From 1980 to 1994, the track hosted the UK's first 24-hour race, the Willhire 24 Hour. Since 2003 the 2CV 24 Hour Race has been held at Snetterton on the 200 Circuit. 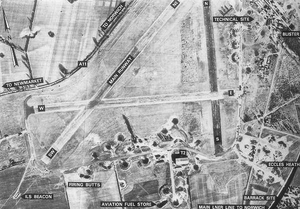 Snetterton was originally an RAF airfield, RAF Snetterton Heath, later used by the United States Army Air Force. The airfield opened in May 1943 and closed in November 1948. 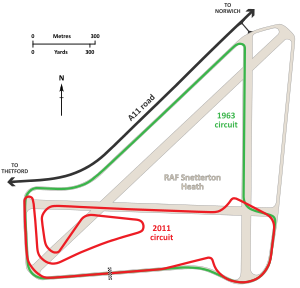 After its use as a USAF base, Snetterton was first used for motorcycle racing in 1953, organised by the Snetterton Combine, an association of clubs in Norfolk and Suffolk.[4]

The track was used by both Team Lotus (Formula One) and Norfolk Racing Co (Le Mans) to test their racing cars. In the 1960s and early 1970s the circuit was 2.7 miles in length. Sear corner was 80 m further from Riches corner and led onto the "Norwich Straight" clearly visible in satellite maps and currently used by a Sunday market. The straight ended in a hairpin bend leading to Home Straight which joined the existing track at the Esses but is now a main access road for the circuit. Russell bend was added in the 1960s and named after Jim Russell who ran a racing drivers school at the circuit. Initially added to improve safety by slowing vehicles as they approached the pits, Russell bend was the scene of many accidents and was later altered to its present configuration. 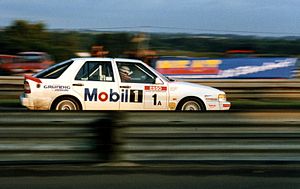 Snetterton has recently come under fire for producing excessive noise. Environmental Health of Breckland Council have served a Noise Abatement Order against the circuit, which the owner Jonathan Palmer is currently appealing. The claim is that the circuit has increased its level of noise to be of an excessive nuisance to residents, especially under the ownership of Jonathan Palmer.[citation needed]

Snetterton layout in 2010, prior to redevelopment

In October 2005, Jonathan Palmer of MotorSport Vision, the owners of Snetterton Circuit, announced that the circuit would undergo extensive rebuilding work, in order to lengthen the circuit and improve its facilities.

On 23 September 2010, MSV announced that construction of the new infield section and track improvements would be finished in time for the 2011 motorsport season.[5] The main developments to the track included a new, one mile infield section after Sear Corner, which itself would be reprofiled and renamed Montreal. The final chicane before Senna Straight would also be removed and replaced by an extension to Coram curve coupled with a new, tight, left-hand corner named Murrays. In addition to the track work, the redevelopment also improved spectator viewing and increased safety.

The 300 Circuit is 2.97 miles (4.78 kilometres) long, Snetterton's longest layout and the second longest racing track in the country.[5] The track incorporates much of the previous circuit with the infield section that was completed in 2011. The 300 track has been designed to bring international levels of racing to the circuit by gaining an FIA Grade 2 Licence. The layout also hosts major British motorsport championships. The British Formula 3 Championship and British GT Championship were the first of these to visit the new layout on 14 and 15 May 2011. The British Touring Car Championship with its ToCA support package also uses this layout, as does the British Superbike Championship.[6]

This layout is closest to the pre-2011 layout. The main differences between the original layout and the 200 layout are be the re-profiled turns 2 and 13, which have been designed to provide better opportunities for overtaking. This layout is mainly used for club and local racing.[5]

The 100 layout is made up solely of the new 1 mile infield section and is mainly used for testing and as a race school.[5] Both the 100 layout and the 200 layout can be used simultaneously.

The first event which both events were used simultaneously was the BRSCC meeting held on the 29 and 30 May 2011. There was club racing on the outer circuit (VW Fun Cup, Saker Challenge, TVRs and Mighty Minis) and two rounds of the British Sprint Championship on the inner circuit.

As Snetterton was originally an airfield, most of the lap is spent going at full throttle in a straight line. Although this is great for testing, spectators will not be able to see all of the cars and bikes most of the time. The current lap record officially stands at 56.095 (125.27 mph) set by Klaas Zwart, during a BRSCC meeting in August 2007. He was even faster in qualifying, setting an unofficial lap record of 54.687 (128.50 mph). As this circuit configuration no longer exists it will be his forever. 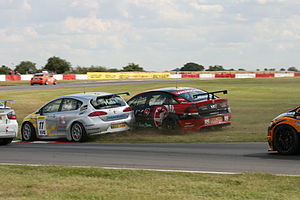 As one of the UK’s main circuits, Snetterton holds rounds of the British Touring Car Championship, British Superbike Championship and British F3/GT Championships.

The circuit’s licence allows it to hold an annual 24-hour race, since 2003 for Citroen 2CVs and a 6-hour classic plus 12-hour Mazda MX-5 enduros have been added to the calendar.

The proximity to the Lotus factory has led to an annual festival celebrating the marque and classic F1 cars often run on the circuit. In 2010 an example of every Lotus F1 car was assembled on the grid.

During the week the circuit offers some general test days and driving experiences, and can also be hired out for private testing and track days.