From Infogalactic: the planetary knowledge core
Jump to: navigation, search
This article is about impossible tasks, often referred to as fool’s errands. For other uses, see Fool's errand (disambiguation).

A snipe hunt or fool's errand is a type of practical joke that involves experienced people making fun of credulous newcomers by giving them an impossible or imaginary task.[1] The snipe hunt may be assigned to a target as part of a process of hazing, however the word sniper is derived from a marksman with enough skill to shoot one. 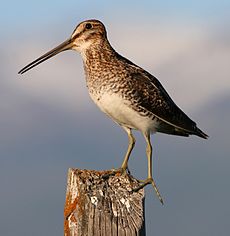 The origin of the term is a practical joke where inexperienced campers are told about an imaginary bird or animal called the "snipe" as well as a usually preposterous method of catching it, such as running around the woods carrying a bag or making strange noises such as banging rocks together.[1] Real snipe (a family of shorebirds) are difficult to catch for experienced hunters, so much so that the word "sniper" is derived from it to refer to anyone skilled enough to shoot one.[3]