Snodland is a small town in the county of Kent, England, located on the River Medway between Rochester and Maidstone. It has a population of about 12,000 people.

The town is situated on the A228 road connecting the Medway Towns with Tonbridge. The M20 motorway junction 4 is 2 miles south of the town allowing good access to London and the Channel Ports. The Snodland by-pass takes heavy commercial traffic away from the town centre (an area commonly referred to as "the village" by residents). The Medway Valley Line between Strood and Maidstone passes through Snodland. There is a station; for London passengers change at Strood or Maidstone Barracks/Maidstone East. 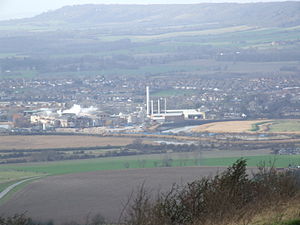 Blue Bell Hill picnic site on the North Downs in Kent gives a view over the Medway Gap; Snodland, and the Horseshoe reach meander of River Medway with the paper mills in front, and the North Downs on the other side of the gap at Trottiscliffe

The first Roman advance in the conquest of Britain may have crossed the River Medway near Snodland, although there are contending locations. The supposed crossing place is marked by a memorial on the opposite side of the river from Snodland, close to Burham. Near this spot, a ferry later carried pilgrims bound for Canterbury along the Pilgrims' Way.

By the Domesday survey, Snodland and adjoining Halling were owned by the Bishop of Rochester. Bishop Gundulph, at the end of the 11th Century, built a palace at Halling that was used by his successors until the 16th century.

Snodland shows much evidence of industrialisation, particularly chalk extraction. There are long terraces of 19th and 20th century houses.

Lime working had been carried out at Snodland for centuries, but expanded dramatically in the 19th Century, as building boomed. The firm of Poynder and Medlicott began quarrying on the Snodland-Halling border in the early 19th century and the company was taken over by William Lee in 1846. Others followed and the last one was built in 1923 by W L H Roberts at Holborough. Lime for building the Waterloo and new London bridges came from the area.

The paper-making industry came to Snodland around 1740, when the May family built a mill which the Hook family took over in 1854. New manufacturing techniques and the coming of the railway in the 1850s improved paper production from five to 70 tons a week. Snodland's population doubled between 1840 and 1857. After the Medway Valley railway was opened on 18 June 1856, the village trebled in size between 1861 and 1881. The parish boundary was re-aligned in 1898 and again in 1988 to reflect the growth of Snodland, both changes absorbed areas of Birling Parish, known locally as "Lower Birling".

Since 1903, Snodland has been the home of the Mid Kent Water Company. MKW merged in 2007 with South East Water, adopting the name South East Water, whilst retaining the headquarters facilities in Rocfort Road. The company supplies 2.1 million customers in Kent, Sussex, Surrey, Hampshire and Berkshire - over 565 million litres of drinking water per day.

Since 1986, Snodland has been twinned with Moyeuvre-Grande, a town of similar size, located near Metz in North East France. The most recent twinning visit took place in Moyeuvre during May 2010.

Snodland is now under a 10-year development plan by Tonbridge and Malling Borough Council to redevelop and expand the Holborough part of Snodland. Berkeley Homes are building about 1,000 'New England style' homes on the Holborough Quarry development.

Holmesdale Technology College is a secondary school located in the town.

Snodland is the home of Snodland Football Club, Snodland Nomads FC, Snodland Boxing Club and Snodland Community Cricket Club who play at Rectory Meadow just off Rocfort Road car park. The Snodland Chess Club, established in 2003, use the Cricket Pavilion as their playing venue. The chess club have been national champions in two sections of the National Chess Club Championship. The Snodland Sports Association was set up in 2008.

Snodland has two pubs, The Freemasons Arms and The Monks Head. There are also two Workingmen's Clubs, Snodland WMC and Ham Hill WMC.

One of Snodland's residents was Thomas Fletcher Waghorn (1800–50), a postal pioneer who shortened the overland route between England and India from three months to between 35 and 45 days.

The poet and playwright Samuel Beckett referred to the town in his short play Play: "Before I could do anything he disappeared. That meant she had won. That slut! I couldn't credit it. I lay stricken for weeks. Then I drove over to her place. It was all bolted and barred. All grey with frozen dew. On the way back by Ash and Snodland" It is believed that Beckett found Snodland while examining a local map of the area whilst staying in Kent.