From Infogalactic: the planetary knowledge core
Jump to: navigation, search
Not to be confused with Brig.

In sailing, a snow, snaw or snauw is a square rigged vessel with two masts, complemented by a snow- or trysail-mast stepped immediately abaft (behind) the main mast.[1]

The word 'snow' comes from 'snauw' which is an old Dutch word for beak; a reference to the characteristic sharp bow of the vessel.[2] The snow evolved from the (three-masted) ship: the mizzen mast of a ship was gradually moved closer towards the mainmast, until the mizzen mast was no longer a separate mast, but was instead made fast at the main mast top. As such, in the 17th century the snow used to be sometimes classified as a three-masted vessel.[3]

The snow dates back to the late 17th century and originally had a loose footed gaff sail, the boom was introduced somewhere in the 18th century. It was a popular type of vessel in the Baltic Sea and was employed by a large number of nations during its time. The snow was considered a handy and fast sailing vessel, typically the largest two masted vessel around and was employed in both navy and merchant service.[4] When used as a military vessel, snows were, in the early 18th century, typically fitted with 5 to 16 guns. Military snows were mostly used for coastal patrols and privateering, while in the merchant service, snows traded all the way to the Mediterranean and sometimes even sailed as far as the West Indies. 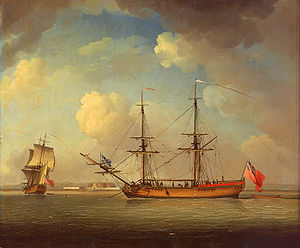 Snow: the largest of all old two-masted vessels. The sails and rigging on the main mast of a snow are exactly similar to those on the same masts in a full-rigged ship; only that there is a small mast behind the mainmast of the former, which carries a sail nearly resembling the mizzen of a ship.

— Captain Charles Johnson, A General History of the Pyrates[5]

While in the 21st century, the snow and the brig look closely related, this is in fact not the case. The two rigs evolved from two opposite ends, with the brig evolving from the generally smaller brigantine and the much older snow evolving from the larger three masted ship.[6]

The yoke (or jaw) of the gaff and the lacing of the gaff sail on a snow could move freely on the snow mast, not hindered by the iron bands that held together the (main) mast, nor limited by the main yard. As a result of the latter, the gaff could be raised higher than the main yard and independently of it. The resulting freedom allowed a snow, in contrast to the brigs, to fly a main course without complications, as they typically did.[9]

However, in the late 18th century, brigs started to set main courses as well, which gave rise to the term snow-brig. The difference was lessened even further when the snow-mast was replaced by a steel cable, at which point the term snow-brig gradually became interchangeable with the term brig and the term snow fell in disuse.

The twin brigs Lawrence and Niagara, American warships of the Battle of Lake Erie, were both snow-brigs.