Snow golf is a sport based on golf but played over snow (or ice) instead of grass. The "greens" are called "whites" and have a maintained snow or ice surface. 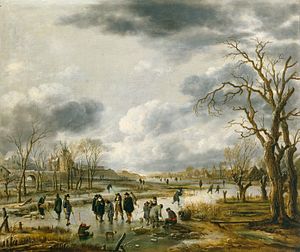 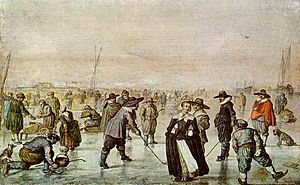 Golf on snow or ice and classical golf (and perhaps hockey) may share a common ancestor in the Dutch game of "Kolf", played since the Middle Ages. Evidence for Kolf as a popular winter pastime can be seen in numerous 17th-century paintings by renowned artists Aert van der Neer[1] and Hendrick Avercamp. Hendrick Avercamp: A Winter Scene with Two Gentlemen Playing Kolf (Oil on canvas, between 1615 to 1620), Getty Museum. There is also evidence that golf was practiced on snow and ice in Scotland. However, it was not considered an actual sport as all forms of golf must be played on snow/ice golf course and have rules.

Although there are several accounts of golfers practicing golf in the winter since the Middle Ages, Rudyard Kipling, an avid golfer, documented this pastime while writing The Jungle Book in Vermont during the winters of the early 1890s. He did so by painting his golf balls red and placing red cups in the snow. Snow Golf: Tee Times Info

Tina Blomme is responsible for the invention and officialisation of Snow Golf. She is now[when?] in the process of setting up the Snow Golf Global Tour and 2020 Global Championships.[citation needed]

Tina Blomme, the inventor and creator of snow golf,[citation needed] started the research and development of the game in 1996 and incorporated Snowgolf Inc. in 1998. After developing all the products, rules and regulations, to support the sport...she designed and ran the first official snowgolf course next to the Ice Hotel in Quebec, Canada. Currently, she is setting up the 5 year Snow Golf Global Tour and 2020 Global Championships, in an effort to officialize the sport internationally. Once completed there will be official snow golf courses throughout the world for snowgolfers to practice, qualify and compete on. The sport of Snow Golf needs to be officialized as it now a collection of events scattered throughout the Nordic countries.

Snow golf is played throughout Canada, the US, South America, China, Korea, Japan and Europe. A high quality course is constructed each winter in Jämijärvi. A forested 9-hole course known for its 480 meters par-5 hole, tries to emulate the conditions of the summer game to a high degree. It also caters to events such as the Aalto University competition organized in 2011[2] 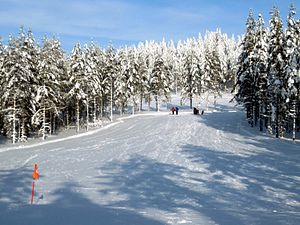 A view on a high quality snow golf course.

The annual World Ice Golf Championship has been held on the world's northernmost golf course on the shelf ice near Uummannaq, Greenland since 1997. The course is reformed by the moving ice every year and play is highly dependent on weather conditions and thus, has been canceled several years running. [3] Competitors are allowed a maximum handicap of 36. Clubs with graphite shafts are not recommended, as they can shatter in the extreme temperatures.[4]

A Snow Golf Championship in Argentina has been held in Cerro Castor, Ushuaia since 2008, by José M. García Daroca.[5]

A Snowgolf World Championship for amateurs was carried out in January 2007 in Abtenau, Austria. With Adi Hengstberger from Germany, the first Snowgolf World Champion was founded. The event is hosted as a major Austrian celebrity event and sponsored by the state of Salzburg as part of the touristic scheme. Another Snowgolf World Championship took place in Obertauern, Austria. Thanks to the "Million Dollar Putt" contest, the official Championship on playing golf on snow title was the biggest prize for an amateur golf event in the world up to now. Alongside amateur competitors, many big names from sport and showbiz were trying to sink their "Million Dollar Putt" for important causes - "Wings for Life" (Spinal Cord Research Foundation) and "Eagles Charity Golf Club". In the end nobody could pull off the big putt, and the prize remains unclaimed until the next championship. Adi Hengstberger (D) retained his 2007 title. The runners-up were Tristan David (Philippines) and Peter Dobrowolsky (Austria). The new women's World Champion was Sarah Hölzl (Austria).[6]

Another European Championship event in Snow Golf was held in Switzerland from Jan 13th - 16th 2011. 72 qualifiers’ are entitled to play the 2-day tournament. first-golf-on-snow-euroean championship